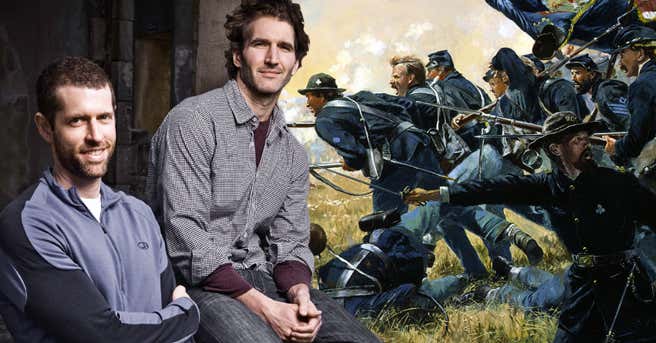 io9, Gizmodo- When David Benioff and D.B. Weiss wrap up Game of Thrones’ upcoming final season, there will still be a number of Westeros-related projects in development at HBO. But the pair’s focus will be elsewhere on the network—specifically on Confederate, a new series about an alternate history where the South successfully seceded, while a new Civil War looms in the present.

According to Deadline, Confederate takes place in a world where the Confederacy successfully seceded from the Union and managed to successfully establish itself as an autonomous nation where slavery is still legal and “has evolved into a modern institution.” Benioff and Weiss will write and showrun the series along with Nichelle Tramble Spellman and Malcolm Spellman, who will executive produce.

In a statement, Benioff and Weiss said that Confederate was an originally an idea for a feature film that they batted back and forth between themselves for years before ultimately deciding that it might be better suited for television.

Said Benioff and Weiss: There won’t be dragons or White Walkers in this series, but we are creating a world, and we couldn’t imagine better partners in world-building than Nichelle and Malcolm, who have impressed us for a long time with their wit, their imagination and their Scrabble-playing skills.”

There are few television makers more adept at building out vast, politically-complicated world than Benioff and Weiss right now, but it would be irresponsible not to note how quickly a concept like Confederate’s could make for some Narratively Problematic Television™

Alternate histories that lead to dystopian futures have always been a hallmark of science fiction and television shows like The Handmaid’s Tale and The Man in the High Castle prove that, when crafted with care and attention to detail, they can make for powerful commentary about the current world we actually live in.

At the same time, though, it’s difficult not to be more than a bit skeptical about a show (dreamt up by two white men) built around the premise that the South won the Civil War and has modernized slavery.

Being caught somewhere between the North and the South, I can confidently say that this show shows no positives. HBO has  already started a “southern series” in Westworld so it cannot be TOO original, and if this show is about people owning slaves and southern racism, I can bet not too many people will be happy about that. HBO also has a history in most of their shows to show very violent, ignorant scenes. Remember any scene in the Sopranos?

Imagine the HBO affect on a show about the South successfully seceding and a new Civil War. The gore and language would be intense to say the least.That being said there are some ways I think this show could be very successful. If it is about a group of slaves coming together against the South and fighting for their freedom that could be a very interesting concept.

At the end of the day, the most racism and ignorance I can handle from an HBO show would be Larry David in these kinds of situations.