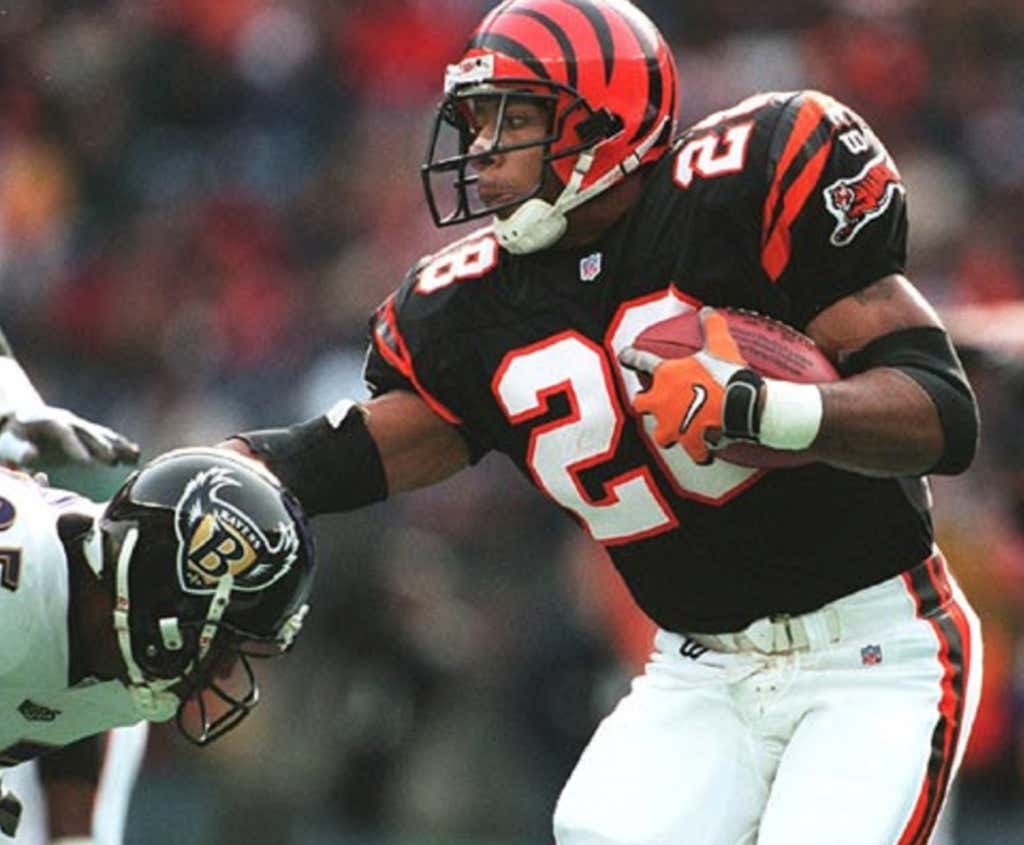 Corey Dillon’s name has been tossed around quite a bit lately as the Bengals organization is releasing their list of the top 50 players in franchise history. Obviously, everyone in the media wants to hear Dillon’s thoughts on the matter as he’s unquestionably one of the best players to ever put on a Bengals uniform, however past contention between the Bengals and Dillon has made things awkward for both parties ever since.

Last week, Dillon sat down with The Cincinnati Enquirer’s Bengals Beat Podcast and took some time to clear the air on his relationship with the Bengals and thoughts towards the organization:

“They say time heals wounds. I played seven years hard for the Bengals. I’m a part of their history. They are a part of mine. I don’t dwell on the past. What happened in the past is done. If I had a magic wand to go undo some stuff I would, but I can’t. But that doesn’t mean we can’t move forward and have a better relationship. That’s how I look at it. I appreciate it for them giving me a call and inviting me back. That means a lot.”

“I am a grown man, I can admit when I’m wrong,” Dillon continued. “I did some stuff that was not cool, OK? Not cool at all. But, hey, at the end of the day I got the end result that I wanted. That was to play on a stage and actually winning a Super Bowl. Do I wish it would have been with them? Absolutely. Absolutely. It didn’t work out that way. I don’t have no ill will toward nobody there.”

Conventional wisdom would tell you that Corey is making amends just to save face in time for the team’s 50th anniversary celebration after ten years on the couch, but I honestly think Dillon has a genuine desire to make things right with the team. CD wasn’t wrong in voicing his frustrations with the team while he was here. Everyone has probably been in a toxic situation whether that be at work or school or sports where everything sucks and people hate each other. On the flip side, everyone has probably been a part of something special at some point where morale is off the charts and work doesn’t seem like work anymore. That’s why it blows my mind when you see fans become legitimately upset at a guy for leaving an organization to take a better opportunity in another city (see Paul George, Kevin Durant) to try to capture that something special. Athletes are people too and all Corey Dillon wanted to do was go to a team that allowed him to win and wasn’t a national embarrassment on a weekly basis. Think about the laughing stock the Browns or the Jags have become, now multiply that by ten and then you begin to have an idea of what life was like for the Bengals when Dillon was in stripes. The Bengals only won 26 games from 1997-2002 and it’s been well documented that Mike Brown and the Bengals higher ups aren’t exactly the easiest organization to play for. Dillon wanted out after years of futility and I don’t blame him one bit.

As far as the Hall of Fame discussion goes, Dillon made his case and took shots at all-time greats Terrell Davis and O.J. Simpson in the process:

“I’m just bringing up this guy football-wise, nothing else, nothing whatsoever. You’ve got O.J. Simpson in the Hall of Fame and my numbers are better than his. Why can’t I be there is my question? What validates him being there and I don’t. I’m not talking about his transgressions off the field, that’s on him.”

While I don’t think anyone is going to argue against Simpson or Davis’ spots in Canton, Corey isn’t wrong when it comes to the statistics. Dillon currently resides just inside the top 20 on the NFL’s all time rushing list with 11,241 yards. More than Tiki, Warrick Dunn, Eddie George, Ricky Williams, Shaun Alexander and countless other running backs from the true workhorse era. Of those 20, 14 have had creepy statues molded in their likeness.

Dillon was also selected to 4 Pro Bowls in 10 seasons and won a Super Bowl in his first year away from the Bengals with New England in 2004. Not to mention, he Broke Jim Brown’s single game rookie record and Walter Payton’s single game record in just 3 short years (Yes, THAT Jim Brown. Yes, THAT Walter Payton). All this for a team that featured Akili Smith and Scott Mitchell under center. If defenses couldn’t stack the box and actually had to worry about anyone other than Dillon, it’s unreal to think of how many more yards or 80 yard TD runs he may have under his belt.

My bias is showing through my boxer shorts, but other than Adrian Peterson, Corey Dillon is probably the best running back I’ve ever seen. He never has, and probably never will get the love he deserves because he was in a shitty situation for so long, but I hope that Dillon is able to make amends with the organization – and specifically the fans. A decade and a half is too long to hate arguably one of the best players in franchise history.