Sorrey you have to click to go to MLB

I knew Chris Christie’s approval ratings were absolute trash, but I didn’t realize it was THAT bad. Getting booed for catching a foul ball at a baseball game is hard to pull off. You basically have to rip the ball out of a little kid’s hands or stiff arm an innocent woman in the throat to get that type of a boo from the crowd. Pure hate and rage. And if catch a ball on a fly or even on a clean bounce, you will actually get an ovation. That’s as athletic a move as you are going to see out of a guy Christie’s size and if anyone else pulled it off, there would have been at least a smattering of applause. But the Mets crowd booed the shit out of New Jersey’s least favorite Cowboys fan when they realized it was him, even after he gave the ball to a kid. You would have thought Jason Bay or Luis Castillo walked onto the field with a boo like that. Not this specimen of an athlete. 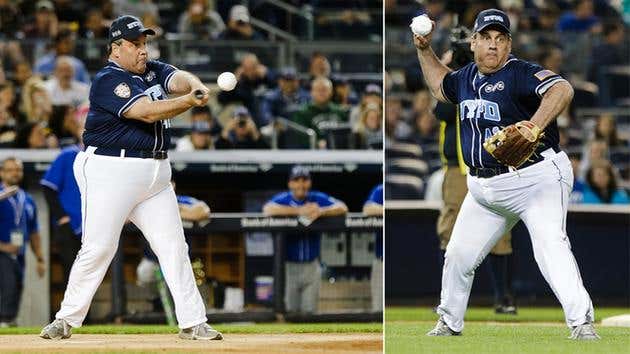 I remember when Christie was the beloved fat guy that spoke his mind and was considered an outsider for telling it like it is. He was basically the Rex Ryan of governors. Then he started catching L’s like Rex with George Washington Bridge incident, becoming Trump’s lackey and later his bitch, and then the infamous Beachgate, which will likely be Christie’s Butt Fumble game. You know you fucked up bad when the Cardinals play-by-play guy is casually stuffing you in a bodybag. I didn’t know anyone from St. Louis had that in them. Even Nelly and the St. Lunatics seemed civil as fuck when rap beefs were going down. But Chris Christie truly brings out the best (but for him, the worst) in people.

P.S. I’ve caught one foul ball in my life (Carlos Beltran in 2007 vs. the Rockies) and I won’t lie, it makes me feel like I’m a better person than people that haven’t caught a foul ball. To get booed by thousands of people during that moment would probably have crushed my soul.