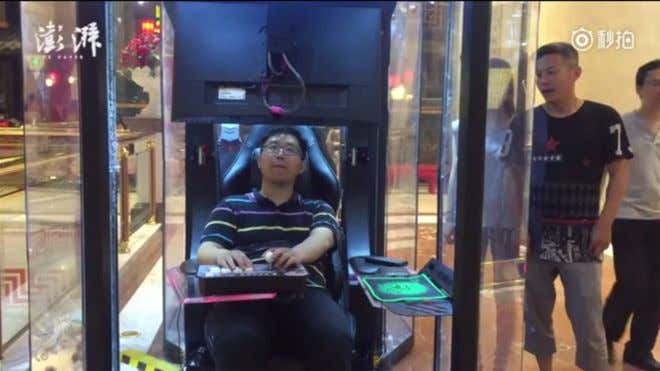 BBC - A Chinese mall has introduced “husband storage” facilities for wives to leave their spouse while they shop, it’s reported.

According to The Paper, the Global Harbour mall in Shanghai has erected a number of glass pods for wives to leave any disgruntled husbands that don’t want to be dragged around the shops. Inside each individual pod is a chair, monitor, computer and gamepad, and men can sit and play retro 1990s games. Currently, the service is free, but staff told the newspaper that in future months, users will be able to scan a QR code and pay a small sum for the service using their mobile phones.

Do I necessarily love the idea that China beat us to this invention? No. Not really. I guess I can hold out hope that Donnie had a little something to do with this. But we weren’t the first ones to land on the moon just for China to beat us to “husband storage” facilities in malls.

Regardless of where these bad boys were invented, they sound like they may legitimately save some lives. How many times do women have to ask the question “which one do you like better?” before they realize that we 1) have no fucking clue what answer you want to hear and 2) don’t care. How many times do we have to stand back and try to find a spot where we’re not awkwardly in somebody’s way while you rifle through racks and racks of shirts only to come away with nothing.

And I know what some of you high schoolers in the comment section are thinking right now. “Grow a set of balls and just don’t get dragged to the mall with your girl”. Ahh to be young and naive again. That’s not how life works, you fools. You want some girl to let you have sex with her? You have to tag along while she goes shopping. There are trade offs in every facet of life, and this is one of them. But while you’re standing there like a shmuck in Nordstrom, you start to think the trade off isn’t worth the price.

Which is where these storage pods come in and save the day.  Just pop in, play some video games for a couple of hours, maybe rip through a season of Always Sunny on Netflix. It’s like you’re spending the afternoon on your couch except now you don’t have to get in a fight about it. And for the most part, girls don’t want to bring guys around shopping with them for the company. They just need somebody to hold the bags and shit. So just sporadically stop by the pod, drop off your shit, I’ll carry it to the car at the end and everybody wins. Can’t believe it’s taken this long to get something that works like this.