HongKongFP- Has Winnie the Pooh done something to anger China’s censors? Some mentions of the lovable but dimwitted bear with a weakness for “hunny” have been blocked on Chinese social networks.

Authorities did not explain the clampdown, but the self-described “bear of very little brain” has been used in the past in a meme comparing him to portly Chinese President Xi Jinping.

But comments referencing “Little Bear Winnie” — Pooh’s Chinese name — turned up error messages saying the user could not proceed because “this content is illegal.”

Winnie the Pooh stickers have also been removed from WeChat’s official “sticker gallery,” but user-generated gifs of the bear are still available on the popular messaging app.

Comparisons between Xi and Pooh first emerged in 2013, after Chinese social media users began circulating a pair of pictures that placed an image of Pooh and his slender tiger friend “Tigger” beside a photograph of Xi walking with then-US President Barack Obama.

And in 2015, the political analysis portal Global Risk Insights called a picture of Xi standing up through the roof of a parade car paired with an image of a Winnie the Pooh toy car “China’s most censored photo” of the year.

The ruling Communist Party is highly sensitive to comical depictions of its leader, particularly as Xi attempts to consolidate power ahead of a key party congress later this year.

China wouldn’t know a brilliant PR move if it karate chopped them in the face. Winnie the Pooh is one of the most beloved characters in fiction and these memes are phenomenal. President Jinping should be embracing his uncanny resemblance to Pooh and plastering these pictures all over billboards ahead of this upcoming election. But for some reason, the government is censoring them, reaffirming their stiff, tone-deaf stance. Echoes of the Muslim world’s ban on cartoonish depictions of the prophet Mohammed. As Barstool’s second voice on all things China, I’ll do my duty and break down the photos. 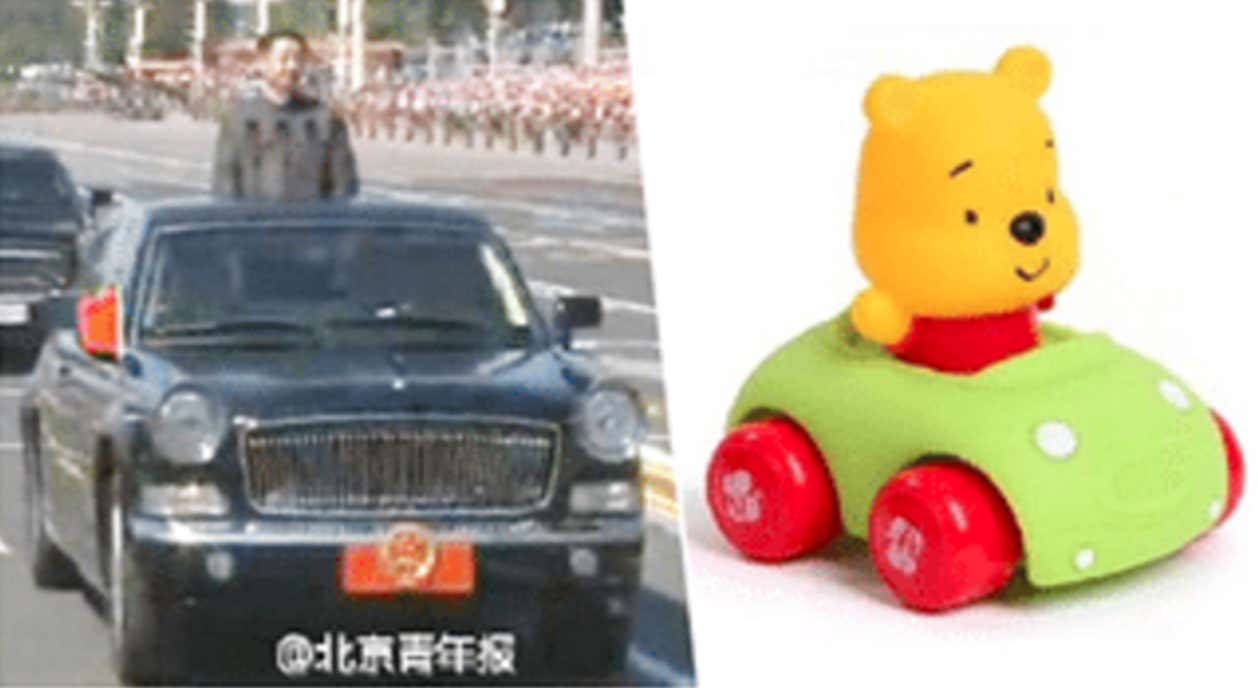 Pretty grainy photo but you get the idea. Apparently this was the most censored image of 2015 in China. Coming from a guy with the thinnest skin this side of the ozone layer, I’d say grow a pair China. This is harmless and not all that funny.

This, on the other hand, is brilliant. Bravo, internet. Look at the facial expressions on both sides: Shinzo Abe doing a spot-on Eeyore and Jinping has Pooh’s hooded-eye look down to a T. Not for nothing, but how shitty did that conversation go before the handshake? Both sides look completely defeated and exhausted. Wonder what they were talking about?

“Americans think China and Japan are towns within a country called Asia.”

First of all, my brain did a 2-minute racism test regarding the depiction of Obama as Tigger. Is this racist? There are many animals that one cannot compare to black people; are tigers ok?Certainly not ideal that his name is Tigger, which is, well, close… but I didn’t generate the meme so if the ACLU is tiggered about this, start with the source.

Racial disclaimers out of the way, this one is just insane. It’s almost like Obama and Jinping were recreating the cartoon, and they absolutely nailed it. Look at their feet and hands! The height difference! It’s a work of art and I’m sure Obama saw it and laughed because he’s smoking the finest weed in Hawaii. Meanwhile, Jinping should have seen this and realized that he’s the earthen embodiment of Winnie the Pooh. It’s indisputable and at this point, you have to own it compadre. You can’t hide from the internet.