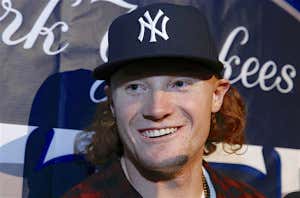 MINNEAPOLIS — Clint Frazier looked at the bottom of Monday’s Yankees-Twins lineup to see if he was in it.

His name wasn’t there. It was higher. Second. “I texted my parents and my agent,” Frazier said. “I had to do a double-take. I was surprised.” Frazier responded with a pair of doubles in the Yankees’ 4-2 loss.

“His at-bats have been really good,” Girardi said. “He’s athletic and he runs the bases really well, so we just thought let’s give it a look. I don’t think (hitting second instead of seventh) will really affect him.”

After last night’s game, Clint Frazier is batting .308 with an OPS of 1.035. Since coming over to the Yankees in a trade last year for Andrew Miller, he has at times been a distraction, but not really because of anything he’s done. He has fiery red hair that he didn’t choose and a confidence that he’ll need to survive in the big leagues at 22. Yet those things were considered negatives.

Spring Training was full of conversations about the length of Clint’s hair. Not once did he go to the media and say he wanted to discuss it. They came to him. Once the Yankees told him he needed to cut it, it was shorter. When asked about his approach to the game, he answered with the confidence of a 22-year-old millionaire who was selected 5th overall. Somehow thought that was being cocky.

Frazier played well in Spring Training but didn’t make the team because of a numbers game and the Yankees desire to bring this new crop of stars along slowly. That led to months of speculation that with Aaron Hicks playing well and the Yankees playing even better, Clint could and would be traded for another arm. Now with him showing that he can not only hold his own, but also be a rally starter, it’s time to end that conversation.

If Clint Frazier could bring back 3 starters, we should trade him today and I’ll personally drive him to the airport. But we can’t get that. Instead we should be encouraged by the role that he can play in the next couple of years and our next young core is taking shape. To make a run at the World Series this season, the Yankees are going to need some magic. The magic normally comes in the form of young players playing beyond their expected ability, not Sonny Gray.

Aaron Hicks is slated to start working out next week and then go through a rehab assignment. When he’s ready to come back, it shouldn’t be at the expense of Clint Frazier and if anything, the Yankees should be listening to offers for Hicks as he makes his way back. We have too many outfielders and unless we’re getting Justin Verlander and a time machine, Frazier shouldn’t be the one to move.