As one of the millions, maybe billions, of people on Earth that hates the fuck out of mimes, this brought a smile on my face to start the day. I was cheering during that meltdown like The Emperor in Jedi.

Because make no mistake about it, that mime is broken to the core. You cannot make an entire profession out of acting like a weirdo mute and then just go fully nuclear on someone in public unless you are fractured deep inside. Shit, just becoming a mime means you have some deep-seated issues. The guy in the black shirt knows he broke a mime, which in my opinion should be some sort of achievement badge in the game of life because of how hard it is to do but also how dangerous it is as well. 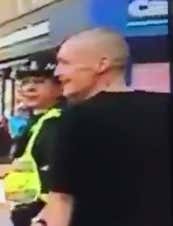 If that mime slit his throat on the spot, I wouldn’t have blinked twice. Again, the issues you must have that lead you to choosing Mime as your profession have to be deeper than the darkest part of the ocean.

However I will say that if this mime was one of those mimes that made his bones acting like a statue, I do have a little bit of compassion for him. Nothing like watching tourists in Times Square lose their shit after they realize the statue they were just looking at is really a person with a beating heart and lifeless eyes.