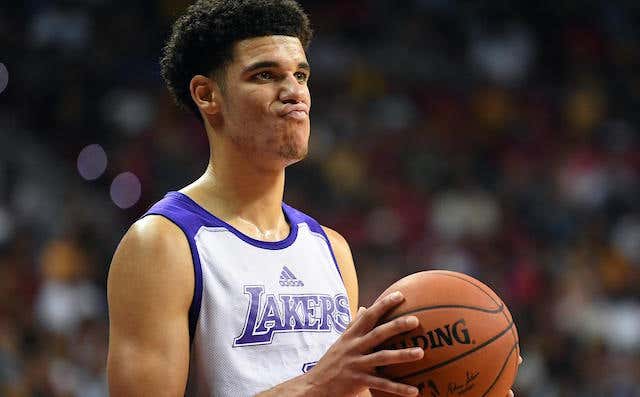 Not a huge surprise here as Ball was named MVP of the Vegas Summer League. Ball won the award after putting up 16.3 ppg, 9.3 apg nad 7.7 rpg, including a couple triple-double games as well. People will talk about his poor shooting or when he skipped the game against De’Aaron Fox, but Ball was who most people thought he would be out in Vegas. He’s provided a ton of highlight passes throughout his time in Vegas. Here’s just some of his best:

As I talked about earlier today, I’m not that worried about his shooting in Summer League. It’s a horrible way to judge someone, especially a rookie. What I did notice was how his game translated and how he looked like the best player on the floor more often than not. Summer League always has such a disparity in talent/athleticism between early picks and undrafted free agents. Ball never just looked like a random guy out there.

No real surprises here except for maybe Forbes being second team instead of first. Bryn Forbes, the Michigan State product, was absolutely ridiculous scoring the ball as he had back-to-back 35 point games. Forbes finished tied for second in scoring with 26 points per game, but tied with him was Brandon Ingram (one game) and above him was Donovan Mitchell (2 games played).

Two players on the first team that I was incredibly impressed with were John Collins and Dennis Smith Jr. I talked extensively about both of those guys during the Summer League, but they are showing they can easily step in at the next level and will have the opportunity to do so. For Collins, it was the development of more fluidity with his game, especially looking to attack from the midrange game. DSJ just showed what everyone expected him to with a spaced floor. He will attack the rim at will. However, people questioned his attitude and competitiveness heading into the Draft. He was arguably the most competitive dude in Vegas.

Caleb Swanigan is another name on here that was truly impressive. He showed his passing ability and how he can step out to the NBA 3-point line to stretch, providing Portland with a couple of different options for lineups. His rebounding is translating so far at the NBA level as well and while he struggles defensively and as a rim protector, he’s going to be in the rotation for Portland.

The final member of the first team was Josh Jackson, who continues to be one of the most versatile players in this draft. Again, he was going to thrive in Summer League due to his athleticism and talent combination, so it’s encouraging to see him just blow people out of the water.