UPDATE: I blogged this when the report was that they shared a plane to London. Turns out they didn’t, but everything I said still stands. 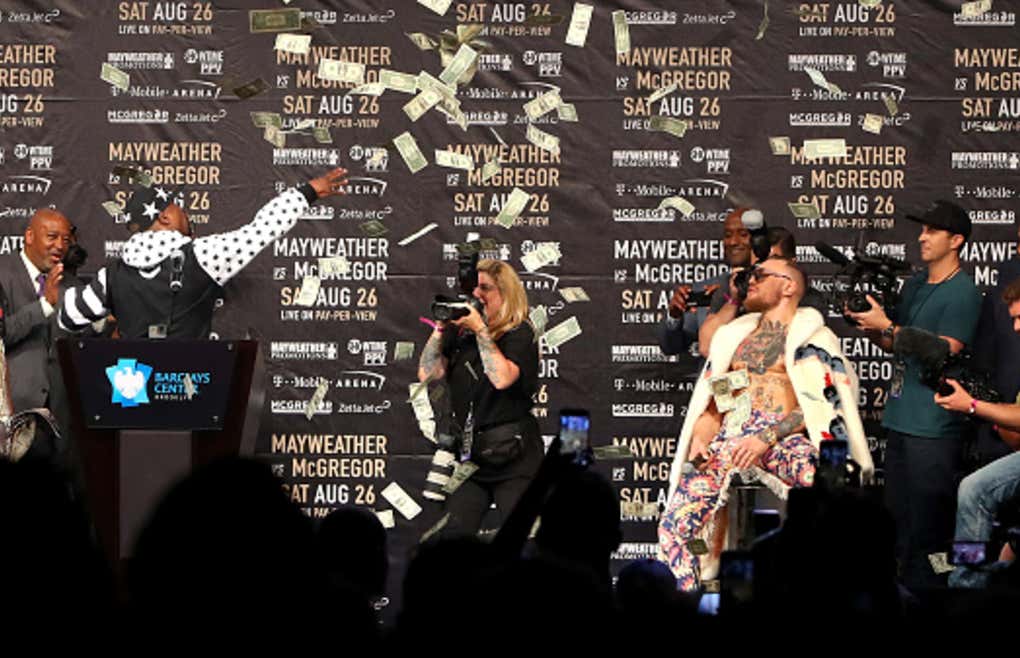 This fight is legitimately a content factory. Every day there’s 10 new storylines to go through and select for my blogs. It’s like if you covered politics and a reality TV star ran for Presiden-oh.

Mirror- Floyd Mayweather and Conor McGregor arrived in London on the SAME private jet this afternoon – hours after they almost came to blows on stage in New York. The pair jetted in to London for the final stop of the world tour to promote their super fight on August 26 in Las Vegas.

Tensions have simmered all week in Los Angeles, Toronto and New York with the fighters engaging in intense trash talk which threatened to spill over on Wednesday night.

Oh course these guys don’t hate each other, ya fuckin’ goofs. They’re laughing their way to the bank together. They sold out four arenas, four days in a row, for PRESS CONFERENCES. The cheapest seat to their fight (face value) is FIVE HUNDRED DOLLARS. They’re both making NINE FIGURES next month. The trailer for the fight says it best: this is big, big business…and everyone’s getting PAID. Including me. Look at the top right corner of this page and tell me you don’t want that shirt that may or may not have an expiration date. Back to the blog now.

Dana White and Leonard Ellerbe have both come out and said this was one of the easiest deals they’ve ever made. Everyone just instantly agreed to the terms and put pen to paper. There is just too much money involved to not go with the flow and make us all believe this will be a bloodbath, and god dammit it’s working. Every day I visualize the moment. The “What if?” moment. The “Could you imagine?” moment. Mauro Ranallo screaming “MAMMA MIA! DOWN GOES MAYWEATHER! DOWN GOES MAYWEATHER!”

Will it happen? I don’t know. I don’t think so. I originally said Conor McGregor had a 1% shot to win this fight. Going into the fourth and final presser today, I say it’s at least increased to 2%, and they don’t even hate each other. That’s how good these two are. Hats off.

Also, respect to Conor for paying tribute to Octagon Bob on his suit today.