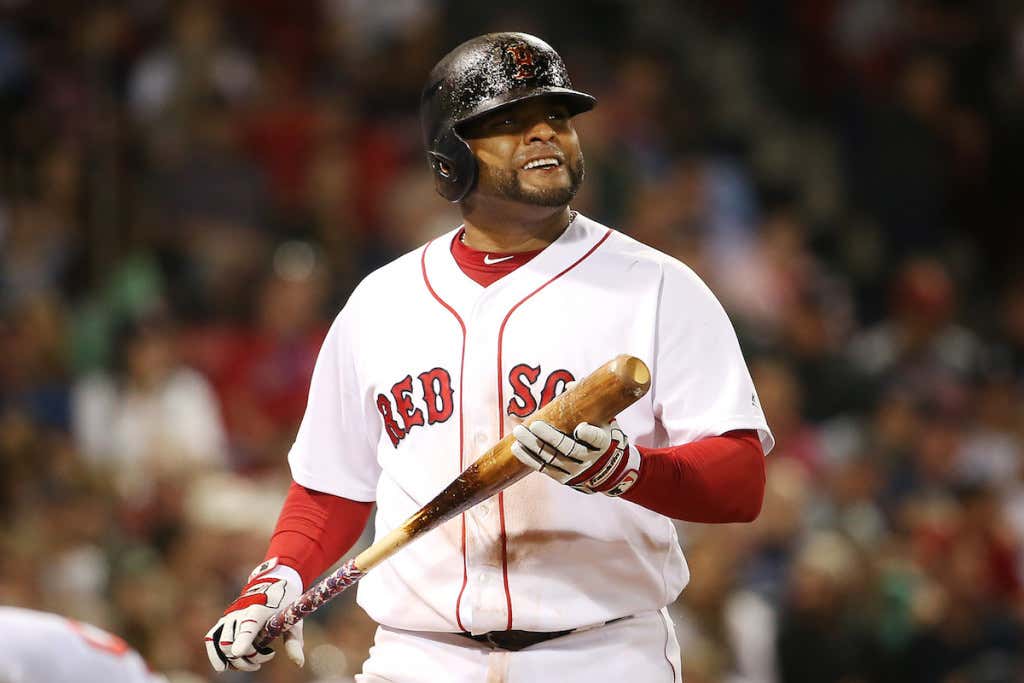 It’s over. It’s finally over. The Red Sox have designated that disaster of a signing, Pablo Sandoval, for assignment, ridding us of any more pain and suffering. I feel like Chief Brody after he blows up the shark at the end of Jaws. I’m safe, the people are safe, the children are safe, and there is an immense feeling of relief, satisfaction, and victory. Like the dark cloud that has been hanging over this team has finally been lifted after three long years.

I’d love to give Dave Dombrowski the credit for this, but this was totally an ownership call. You don’t just say, yeah I’m gonna eat the remaining $49.5 million on a player’s contract without getting ownership involved, so a big, big thank you goes out to John Henry for realizing that this “complacent” (in Pablo’s own words), washed up bum would be dragging the team down if you ever brought him back to the 25-man roster.

In the offseason entering the 2015 season, the Red Sox needed a third baseman, and Sandoval was the fourth guy on my depth chart. I wanted Josh Donaldson. The Red Sox tried to get him here, but the A’s lied and said he wasn’t available before trading him to Toronto. Second in line, believe it or not, was Hanley Ramirez, who was being shopped as a potential third base candidate. The Red Sox ended up with him anyway, but that was to play left field, which worked out fantastically. Third was Chase Headley, who ended up in New York, and I see Yankee fans complain about him all the time, but you don’t know what complaining about a third baseman truly is until you end up with the fourth guy down on my list, which was Sandoval.

If you read Terry Francona’s book, then you know that this organization cares a LOT about the marketability of their players. They wanted to sell Panda hats, and Panda t-shirts and have a Panda mascot at the press conference. He was supposed to be the next lovable fan favorite like he was in San Francisco. Sure, Sandoval performed well in October with the Giants and was a pretty good defensive third baseman in his time there, too, but the Red Sox just never saw that player here in Boston at any point. In the summer of 2015, some asshole noticed Sandoval liking pictures of big titty Instagram models during a game in Atlanta, and it was really all downhill from there.

Sandoval got suspended for that, missed all kinds of time in 2015 with foot injuries, knee injuries, ankle injuries, forearm injuries, elbow injuries, back injuries and fucking pneumonia ended his season. That was all just in 2015 alone. Then his belt exploded in Toronto in April of 2016, and he only played in three games that year, missing basically the entire season after he got surgery on his left shoulder. Prior to his injury, he actually lost his starting job at third base to Travis Shaw, which prompted his agent to make the most RIDICULOUS comment in the history of pro sports, asking the Red Sox why they’d “leave the Ferrari in the garage” in reference to Sandoval.

This past December, Sandoval did an interview with ESPN where he admitted to being “so complacent” after signing a $95 million contract with the Red Sox, and that he “did not work hard in order to achieve more and to remain at the level of the player that I am and that I can be.” That interview got swept under the rug for some reason, and I’m not sure why.

But for the people that were defending Sandoval for his shitty performance in Boston and blaming the media for why he wasn’t performing well, you can take those quotes where Sandoval admits to being a lazy piece of shit, shine them up real nice, turn them sum bitches sideways and stick ‘em straight up your candy ass. He didn’t give a fuck. He got paid, and he mailed it in. That’s coming directly from the player, and we didn’t need him to even admit that to know that that’s what was going on. It was obvious.

The debate is over on who has the worst contract in Red Sox history. It is hands down, unequivocally Pablo Sandoval. For those who think it’s Carl Crawford, the Red Sox were at least able to move that contract to another team, got out from under it entirely, and did so only a year and a half into it. Crawford was here for a year and a half, while Sandoval was here for parts of three years, and the two played the exact number of games for the Boston Red Sox, which was 161 games. Crawford hit .260 with a .711 OPS, while Sandoval hit .237 with a .646 OPS.

Sandoval was never going to live up to that $95 million price tag. He wasn’t that type of player in San Francisco, and he wasn’t even remotely close to that type of player in Boston. If you go by wins above replacement, Sandoval contributed negative production every year that he was in Boston. Now that’s he’s designated for assignment, the Red Sox can either trade him, release him, or option him to Pawtucket after he clears waivers. I’d imagine that the Red Sox will wash their hands clean of this whole thing, release him, and close this embarrassing chapter in the history of the Boston Red Sox. Good riddance.