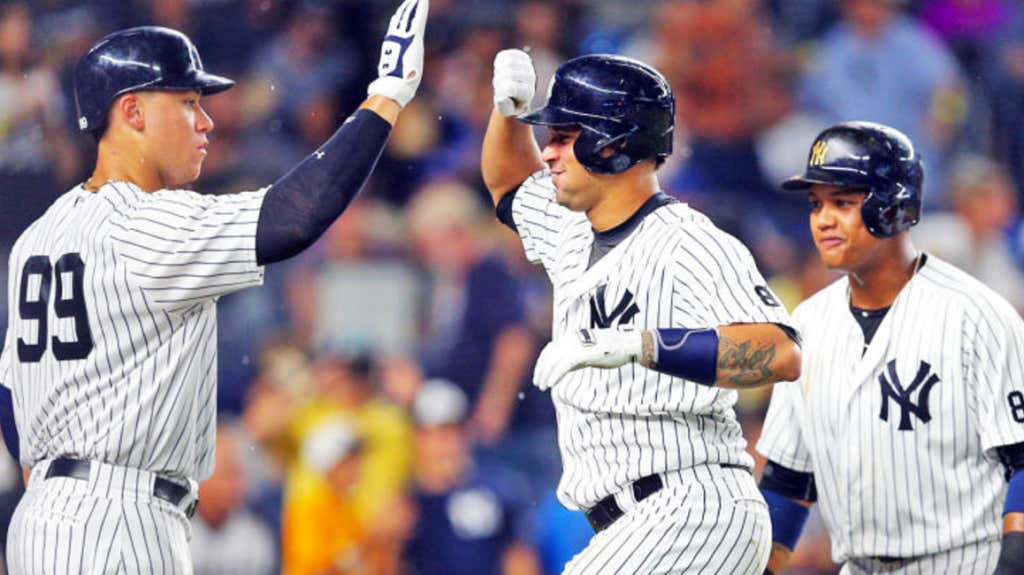 We were having so much fun in April and May. SO MUCH FUN. The most fun I’ve had watching the Yankees since the ’09 title run, by far. Of course it couldn’t last and the roller coaster of a first half ensued.

The All Star Break couldn’t have come at a better time as the ride we were on was pretty close to coming off the rails completely. It was tough to watch almost any game in June simply because no lead was safe. Tyler Clippard was responsible for almost every blown lead it felt like, and we continued to get absolutely zero production from first base. When it was all said and done the Yankees only trailed first place Boston by two games in the loss column. All things being said, that’s a prayer and a half considering how bad this last month and a half has been. July is going to be a huge month and a deciding month, more or less, on how this season is going to shape out.

Hoping to see a bunch of you guys on Saturday. Brazen Fox is on the corner of 13th street and 3rd ave and there’s going to be all sorts of beer deals going on. If this all goes well we’re going to do a bunch as the season heats up.

Literally as I’m writing this blog Cashman has made a move sending Tyler Webb to Milwaukee for this 26 year old minor league first baseman who’s been MASHING. Currently in Triple A, Garrett was hitting .366 with 17 homers and 82 RBIs. Cooper was a sixth round pick out of Auburn in 2013. He wasn’t listed in the top 30 in the Brewers minor league system and is 26 years old since he stayed all four years in college. A lot of people love the move because of that stat line he’s posted in the Pacific Coast League, but I really liked Tyler Webb. He took the pressure off of Chasen Shreve as the only lefty out of the pen and was pitching pretty solid in his short time up in the big leagues. I’m pretty bummed, but if this kid can mash the way he was in AAA then obviously sign me the fuck up. Looks like the first base carousel will continue to move at full speed.

Okay…now to the mailbag

Sure sign me up right now, but who in God’s name is going to give up a valuable reliever in return getting Chase Headley? Are the Mets dumb enough to hand us Addison Reed just to get a veteran on the team? If that’s the case then I will not complain one second. Would I rather a stronger power bat at third than Ronny Torreyes? Sure would, but at least he’s a smooth defender and hits for a solid average. If it meant getting Addison Reed and freeing up even more money for next year then I wouldn’t complain one bit. Oh, and more importantly KFC and Clem would have Chase Headley in his life which would make me very happy.

Clem’s Editors Note:
You are a sick fuck, Hubbs

Jose Quintana was my number one target heading into the trade deadline. Well, after the Cubs gave up a king’s ransom for him today, that dream has died. Reports came out that the Yankees were involved in talks, which comes at no surprise. But for what it cost Chicago, I wonder what New York would’ve had to give up. White Sox Dave suggested the asking price was hovering around Frazier, Florial, Fowler, AND Andujar and I scoffed at that. From the looks of the deal though, that probably wouldn’t have even been enough.

So back to the question, would I rather strengthen the pen or go after an arm in the rotation? Well, how about both? If they don’t answer both problems then the championship run is going to be postponed for at least another year. A rotation of Severino-Montgomery-Pineda-Tanaka-CC isn’t going to cut it and a bullpen with the unreliable arms we currently have won’t either. All Star reliever Pat Neshek will likely be the most coveted bullpen arm on the market as the Phillies have no use for him and try to get younger. In 35.1 IP the side-armer has a sparkling 1.27 ERA with a 36/5 K:BB ratio. I’m not sure what it’ll cost to get the man, but he’s a guy we desperately need. Oh and now that Tyler Webb is gone I’m guessing they’re gonna go out and get a solid arm.

For the rotation issues, I would love if Cashman hit up the A’s and got me Sonny Gray. I’ve been in on Gray since he made his debut and out-dueled Justin Verlander in the playoffs as a rookie. I wonder if his price tag will soar now that Quintana cost an absolute fortune. Gerrit Cole has rebounded nicely after a poor start to the year so I’m not opposed at going after him either. All I see in Cole is Roger Clemens. He’s an arm I need in my rotation, regardless of the numbers.

I don’t want anything to do with Justin Verlander. Nothing. He’s owed 28 million in each of the next two years and has an ERA that’s soaring towards the 5’s. He’s 34, severely overpaid, and flat out sucks at pitching. Absolutely not unless the Tigers eat at least half his salary and ask for nothing in return.

As great as Judge may be, I think the next captain is currently playing right field in Washington. When he comes over all hell will break loose.

Probably Andujar, Wade, and a middle level arm is the furthest I’d go. Maybe Sheffield and Andujar I’d do, but that’s it. I’m a big fan of Gray and I would strongly welcome a deal for the kid. He has a few more years of arbitration left and hasn’t had a big history of injuries. Gray would be a star for the Yankees, plain and simple.

Clint Frazier is Growing On Me

So we’ll have to wait and see if this Cooper kid is the fix for first base. Cashman’s next move has to be for a reliever and then if the right deal comes along pull the trigger. I’ve began to cool off on my Clint Frazier trade nonsense because I think he can be the guy who insights the rivalry back up with Boston. I’m excited to see the kid’s first taste of Fenway this weekend and it would be unreal if he was the one who started a brawl. Put one over the monster and bat flip to the fucking moon. Let’s go Clint, I need “Scorch Earth Clint” this weekend.

Hope to see some of you guys at Brazen Fox on Saturday. Should be a great time