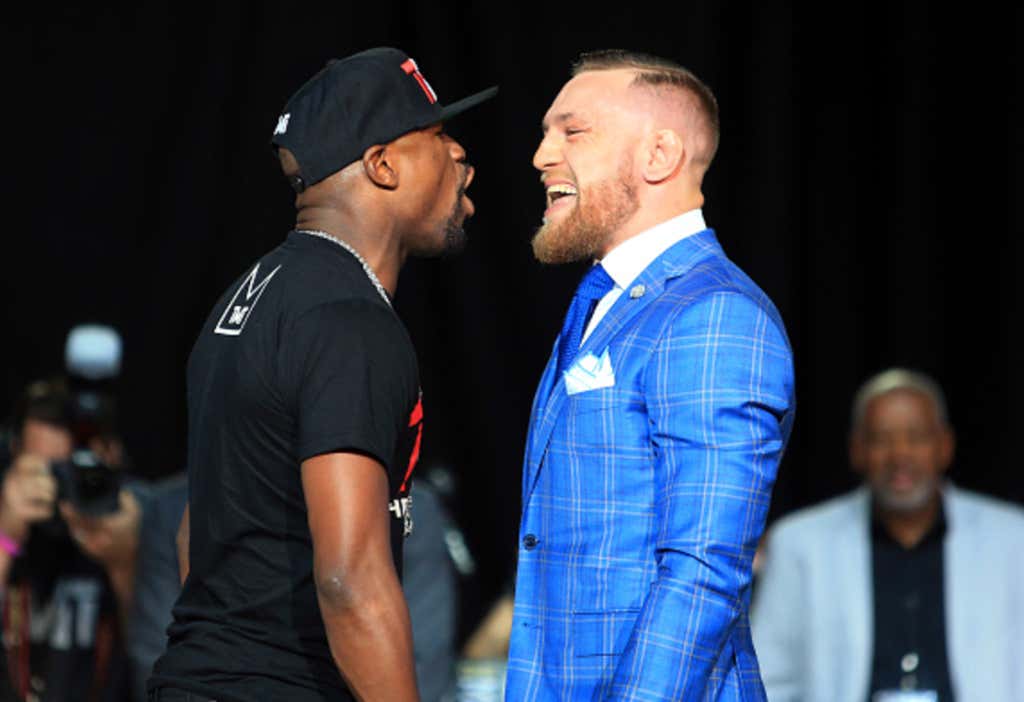 If you missed yesterday’s press conference, this Dana White vlog wraps everything up pretty well:

Funniest part is the audio of what they said to each other that we missed out on yesterday. Here’s the full transcript:

McGregor: Look in my eye. I’m gonna bounce your head off the canvas.

McGregor: I’ll bounce your head off the canvas.

McGregor: Keep your gloves up, too. I break the guard.

Mayweather: Not me, not me.

McGregor: My shots break the guard.

McGregor: My shots break the guard. You ain’t got shit.

White: Alright, alright. I get nervous.

Mayweather: You ain’t making it out of the first round. Keep talking.

McGregor: You ain’t gonna do shit.

So uhh, Mayweather was playing checkers while McGregor was playing chess. No surprise there. Today, we saw McGregor play the most complex game of chess EVER played while Floyd tried to fit the square block in the triangle hole. It was the most lopsided ANYTHING I have ever seen in my life. Drake introduced the presser in Toronto, I thought the crowd went INSANE, but then Conor fucking McGregor walked out, and everyone collectively cummed themselves. Floyd went out there in a new hat, featuring the “Toronto flag” as he called it (it was just the Canadian flag), and they did the staredown they did yesterday where they screamed in each other’s faces but we couldn’t hear a word, and I don’t even mind that. I could watch them silently scream in each other’s faces for hours.

Then he told Money Mayweather to go fuck himself, told TMT to go fuck themselves, told Showtime to go fuck themselves (for cutting his mic yesterday), called Stephen Espinoza (the Showtime Exec that basically made this fight happen) a fucking weasel, it was scorched earth central. The ultimate mic dropper was when he finally dropped the “YOU CAN’T READ” bomb on Floyd.

Dear god Conor McGregor is bringing the house down. I don't think I've seen anything like this before. #MayMacWorldTour #MayweatherMcGregor pic.twitter.com/23TptZMmVF

Floyd tried to follow that, and it wasn’t great! The crowd wouldn’t let him get a word in, booing him into oblivion and chanting “PAY YOUR TAXES” at him. Crying face emojis.

He rambled and rambled and did the “HARD WORK” thing. He showed us his check to the IRS again. Then he grabbed an Irish flag out of the crowd, and draped it around himself like it was a cape. Conor took offense, grabbed his bag “full of money”, and was laughably offended that there was only 5 grand in it. I wanted him to throw it into the crowd to bad, but tensions cooled and cooler heads prevailed.

10-8 rounds are very rare in combat sports. 10-7 rounds are almost nonexistent. This presser was a 10-1 round. It was over real quick. The good news is that we now have this FIRE shirt that may or may not have something to do with the money fight this summer. Declare your allegiance, and declare it now.

Make sure you also follow me on Twitter @RobbieBarstool because I just got my confirmation from Mayweather Promotions that I’ll be a credentialed member of the press in Brooklyn for tomorrow’s presser. Big fucking J like you hear about. WAR MCGREGOR. BUY A SHIRT.