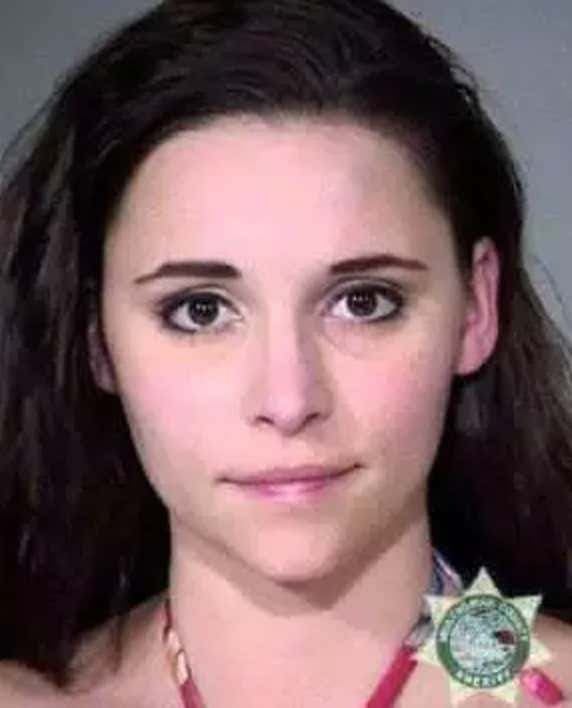 National Post- An Oregon woman who licked, groped and verbally harassed a female passenger during a flight from Las Vegas to Portland was sentenced Monday to eight months of home detention.

Heidi McKinney, 27, of Banks declined to make a statement during Monday’s sentencing at the federal courthouse in Portland, The Oregonian/OregonLive reported. McKinney, who wrote a letter of apology to the victim, pleaded guilty in March to assault with intent to commit a felony.

McKinney was arrested May 8, 2016, after the Alaska Airlines flight landed at Portland International Airport. The 19-year-old victim told authorities she had been touched without consent.

Assistant U.S. Attorney Ravi Sinha wrote in a sentencing memo last week that the abuse started before the plane departed. Sinha said McKinney, who appeared to have been drinking, tried to speak with the young woman, but the victim was reluctant.

Sinha said McKinney tried to pressure the woman into drinking alcohol she had smuggled on the plane, and subjected her to lewd taunts and physical aggression. He said McKinney licked the victim’s ear, forced her to touch her breasts and repeatedly placed her hand on the victim’s crotch.

At that point, the victim asked the flight crew to be seated elsewhere.

I’ll tell ya, it’s not Vegas that will get ya–it’s the flight home. One of the darkest places on earth. Never in the history of civilization has a person on the return flight from Vegas said, “I wish we could have stayed longer!” It’s like a transport shuttle full of liberated prisoners from a P.O.W. camp in Vietnam. It’s dead quiet; no one speaks because, while it’s nice to be free, the experience was so traumatic that it will be months before anyone can talk about it.

That’s one way to handle it at least. But Heidi Mckinney took a very different track, channeling her inner Nic Cage from Leaving Las Vegas. Apparently, she had no idea the weekend was over. Simply couldn’t turn off the fun. Wore the city onto the plane, along with some contraband booze.

Heidi, I’ve tried to hit on girls on planes before and you have to ease into it. They know they’re stuck next to you for the duration of the flight so you can’t come out firing. Breaking the ice with a boob grab is bold. Too bold. You have to earn that, and you’d better be damn sure your neighbor is consenting. Also, when initiating small-talk, you should avoid calling her poor and telling her how rich you are. Discuss the weather, the lack of leg room, or how the toilet flush makes you think you’re getting sucked out of the plane. Getting into a financial dick-measuring contest is a quick way to get the cold shoulder.

Of course, when you’re down in the count, sometimes you just have to swing for the fences. Heidi thought Ravi was playing hard to get, so she dispensed with the foreplay, straddled her, and said “let’s fuck.” I personally like a woman who takes charge in the bedroom/coach cabin, especially when it comes to thwarting terrorist attacks. But Ravi sounds like a nice girl. Can’t be that aggressive. Some people need to be snuggled and coaxed like a delicate flower.

[A month later] McKinney admitted herself to an inpatient treatment centre in April after she was found unconscious at a local bar, the sentencing memo states.

Sounds like it wouldn’t have worked out. Heidi is a wild, alcoholic stallion and Ravi is a cold noodle salad. Here’s hoping they’re still friends though.