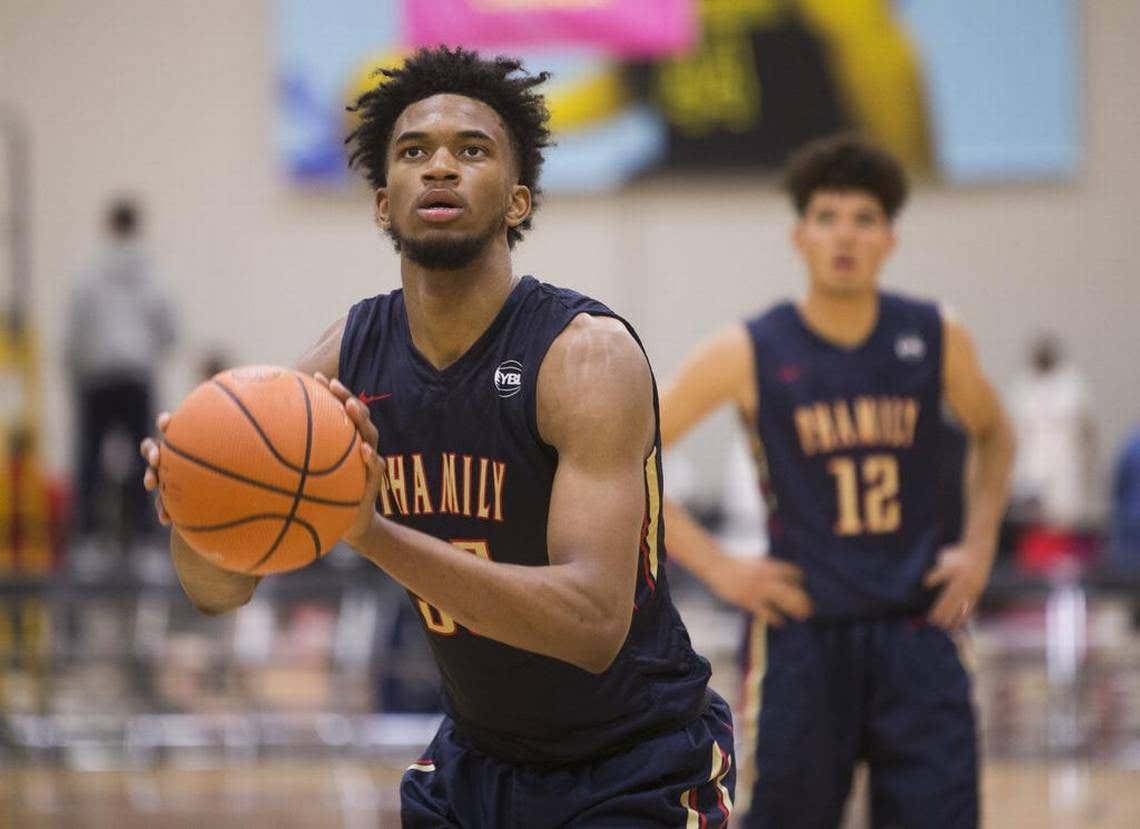 Today starts one of the craziest three weeks in college basketball. We have the July recruiting period starting at 5:00 pm today running until 5:00 pm Sunday. This is the first of three consecutive weeks with such rules, which just happens to coincide with the Peach Jam – which is the best AAU Tournament on the circuit.

So what does the July live period entail? Well, for starters you can’t make contact with a recruit or the families of the recruits. But, as Rick Carter, a former assistant coach told me, there are easy ways around that. You just happen to bump into them at a hotel or at a restaurant you exchange pleasantries and it’s a way around it. Staffs will go to games across the country to essentially sit and watch either their recruits or commits. It’s babysitting in a way, just to show your face to show your guys that you’re still interested in them and still want them even if they committed. As Rob Dauster pointed out, the general rule of thumb is more staff members at one game, the higher priority that recruit is.

These 15 days are really what makes or breaks a recruiting class. The coaching staff knows these guys and have seen them play before. It’s viewing they improved or what they added to their games that really push the way the coaches recruit. Now, there are stories of guys breaking out during the July AAU circuit and catching the eye of a bigger program, jumping from a mid-major recruit to a higher one and that will be the case yet again at the Peach Jam.

So what is the Peach Jam and why should you care? First off, it’s the best tournament on the AAU circuit and it’s part of the Nike EYBL Circuit. Why should you care? Well, if you’re a fan of a division I program, your future players are in this tournament. That’s really the only reason why. You get to see them play against top talent and get the first glimpse of what they can be. There are 40 teams in the Nike EYBL circuit and as they play a regular season it leads to invites to events such as the Peach Jam – which takes the top-24. The top 5 teams in each of the 4 divisions get automatic bids and then there are 4 wildcard selections. This year the only controversial selection was Nike Phamily (No. 1 prospect Marvin Bagley’s team) who went 2-14 in the regular season.

Here’s a look at the pool groups for the Peach Jam. Note Nike Team Florida beat Team Final in the play-in game, so Team Final goes to the Peach Invitational. Team Final includes Cam Reddish and Louis King. This was a somewhat significant upset: 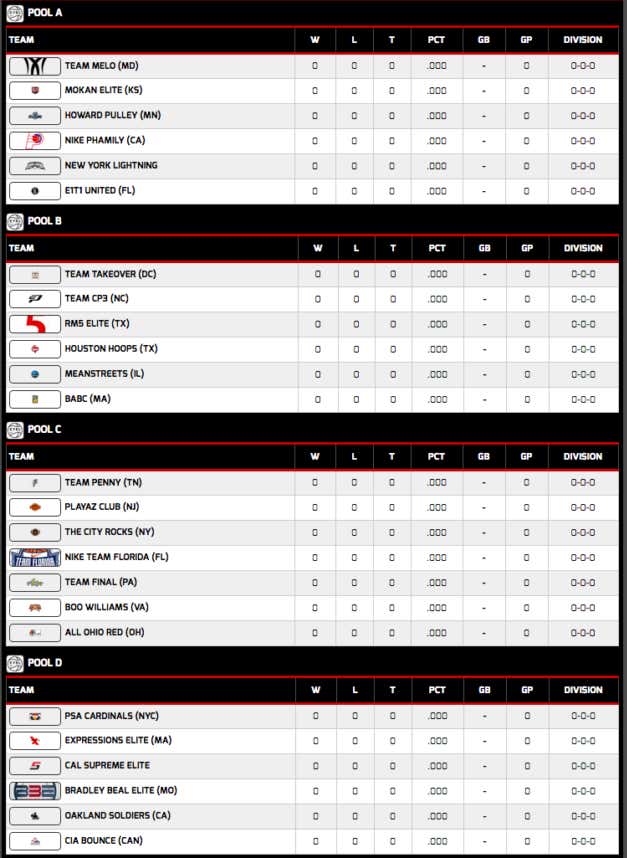 This is quite a group of names. The one thing with the Peach Jam is you get to see real basketball compared to the AAU world many are used to. These guys actually care about winning the event and Nike has done a great job cleaning up the circuit. These things matter as there are sponsorship deals and other things that can happen if you make the Peach Jam and win the event. 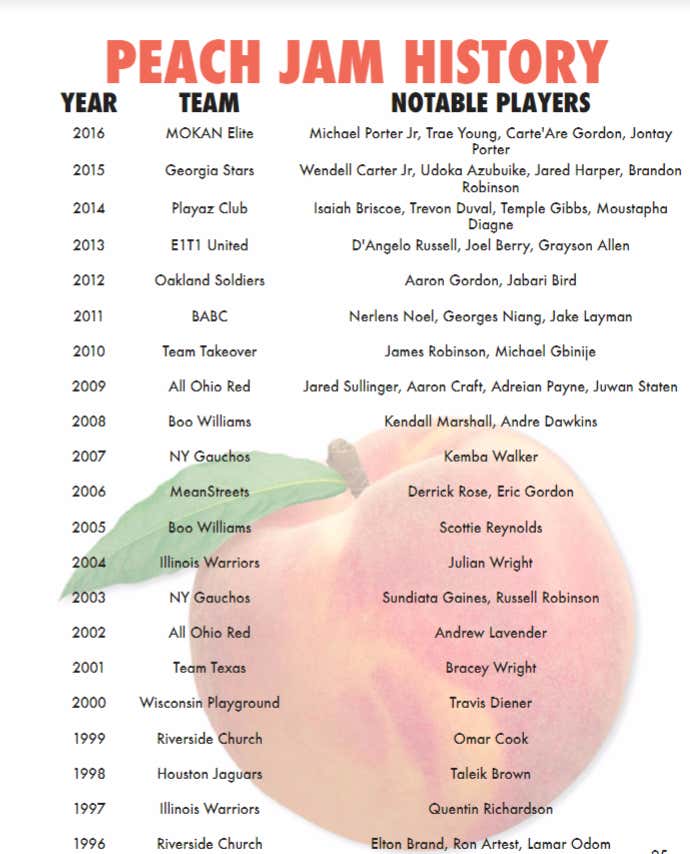 Players You Need to Know:

Bagley is the new age big guy. At 6’11” he has plenty of size, but can step out, beat you off the dribble and attack the rim from any standpoint. He’s drawn comparisons to Chris Bosh due to his size and ability to play away from the basket. He’s been playing in the Drew League and we’ve seen him go up against DeMar DeRozan among others. During the spring regular season, Bagley put up a stat line of 25.8 points/14.9 rebounds/3.7 blocks per game.

The son of Manute Bol, Bol Bol has made himself one of the top prospects in the class of 2018. He’s 7’3″ with a 7’8″ wingspan, making him an absolute monster rim protector similar to his dad. He was MVP of the EYBL regular season after putting up 24.1 points/10 rebounds/4.5 blocks per game. He’s doing this all while being one of the youngest guys in the class as he doesn’t turn 18 until November. He has good hands to run the pick-and-roll and being 7’3″ it gives his guards a good target to throw lobs to. Cal Supreme will be a favorite to win the event.

A first team EYBL selection, Jones is one of the guys who could really push to be a top-5 recruit after this event. He put up 19.3 points/8.3 assists/5.4 rebounds per game during the EYBL regular season. We’ve seen his brother (Tyus) breakout during the Peach Jam and win the event and Howard Pulley is one of the favorites after going 13-3 in the regular season. Coaches will be looking to see if he improved his jumper, which is the weakest part of his game so far. He’s a pass-first point guard, but can go get his own if need be.