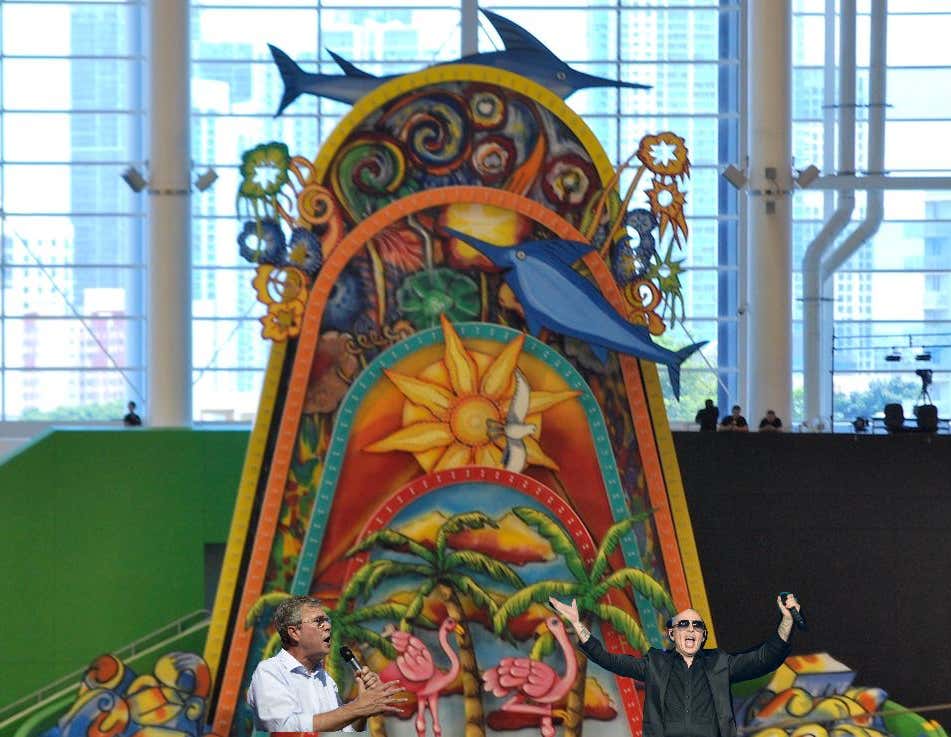 Miami Herald- Jeb Bush is getting some help from Pitbull in a bid to buy the Miami Marlins. A spokesman for Armando Christian Peréz, best known as the Miami-based rapper Pitbull, confirmed Tuesday that the celebrity is joining the investment group that includes the former Florida governor, a CNBC star, and the son of former presidential candidate Mitt Romney. “Yes, he is part of the group,” Peréz spokesman Tom Muzquiz said. He declined to elaborate.

As it faces competition from prominent Miami business owner Jorge Mas, the group that now counts Pitbull as a member is hoping to promote its local ties. The group is headed by New York-based Wayne Rothbaum, who allied with Boston’s Tagg Romney to pursue a bid that brought in Bush after the former governor’s own purchase attempt faltered amid a failed alliance with retired New York Yankees star Derek Jeter.

DALE MOTHERFUCKASSSSSS. Just when I thought that the team of Derek Jeter and Michael Jordan was the ultimate power couple looking to sit on the Iron Throne of Miami baseball, we have Mr. Worldwide descending from his floating mansion in the clouds (Pitbull DEFINITELY lives in a flying mansion) to team up with The Other Bush. Best odd couple since Kane and X-Pac were running wild during the Attitude Era of the WWE. My tiny blogger brain can’t even fathom what a meet-up with Pitbull and Jeb would look or sound like, but I know it would be pure, unfiltered electricity.

The real problem for Jeb is that this partnership is exactly two years late. Jeb already had the famous last name and the bloodline to become President, but he was bland as fuck and The Donald pounced on his biggest weakness. If Jeb had Pitbull in his corner, there is no way Trump would have just ragdolled hm around the debates the way he did. Your swagger rating goes up exponentially by the minute when you hang out with Mr. Worldwide. But I guess Pitbull and Jeb teaming up is better late than never. Jeb’s probably listening to Timber on loop right now with the volume actually in double digits as his wife keeps telling him to turn that racket down.

Anyway, I’d watch Pitbull and Jeb take on Jeets and MJ in Connect Four let alone engaging in political power plays for the Marlins. I’m going to pencil in Pitbush as the current favorites to land the Marlins because while MJ and Jeets may rule supreme when it comes to sports and legacy, Jeb is the former governor of Florida and Pitbull is the permanent President of Miami. Jeets may be the big swinging dick of Tampa, but once he hits South Beach, that is Pitbull Country. The only way Pitbush loses is if A-Rod and The Rock partner up. And if that happens, allllllll bets are off.