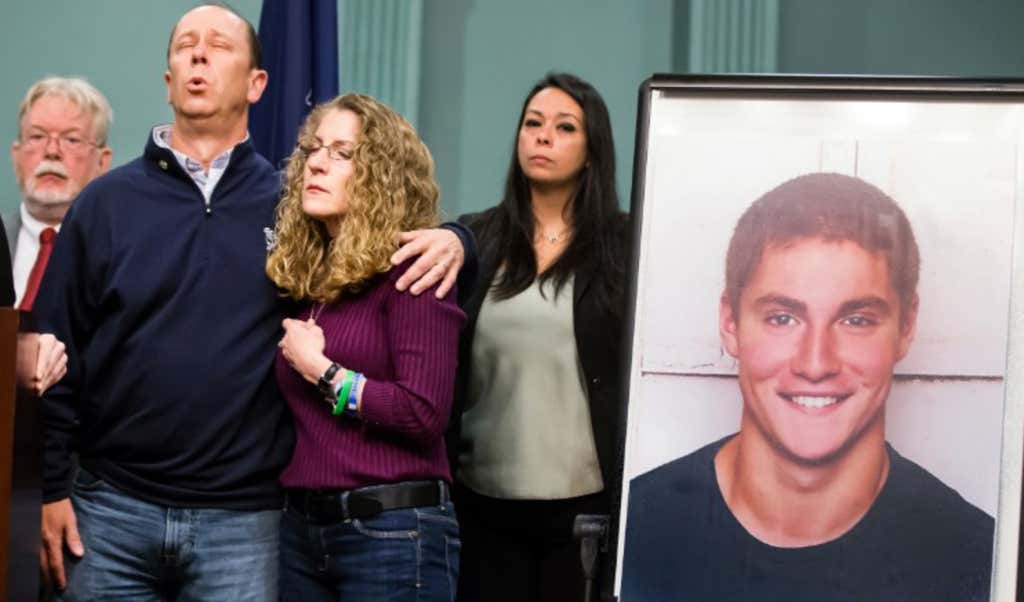 BELLEFONTE, Pennsylvania — “I think we are fucked. Like beyond fucked,” Daniel Casey, a Beta Theta Pi fraternity brother at Penn State University, texted his girlfriend on Feb. 3.

Casey was referring to events that led to the Feb. 3 hospitalization of Timothy Piazza, a 19-year-old sophomore who sustained multiple traumatic injuries after falling down several times during an alcohol-fueled “bid acceptance night” Casey, the chapter’s “pledge master,” and his brothers had organized.

“I don’t want to go to jail for this,” Casey texted his girlfriend.

The next day, Piazza died.

Casey’s texts were among dozens of messages presented by prosecutors at a preliminary hearing at Centre County Court in Bellefonte, Pennsylvania, on Monday.

Horrible story to revisit, but prelim hearings have started for the tragic death of Penn State pledge Timothy Piazza after a night of brutal hazing and all the disturbing details are starting to leak out.  16 Beta Theta Pi brothers are facing over 850 charges for it, including involuntary manslaughter and aggravated assault.  If you’re wondering why I haven’t defended the frat despite a history of standing up for Greek life during media onslaughts, it’s because absolutely nobody with a conscience could defend what these guys allegedly did.  It’s not even a frat thing at this point, it’s a human decency thing.

Video surveillance taken from the fraternity that played during the hearing last month showed that between the falls, Piazza spent much of the night in pain on a couch, where some of the brothers tied him with a backpack, sat on his legs, dumped liquid on his face, threw shoes at his head, and struck him on his injured abdomen.

And now a bunch of the text messages exchanged by the brothers accused of trying to cover it up have come out in court, and a bad situation is now somehow even worse.   A sampling:

-“I don’t think you fully comprehend the situation,” Young told his girlfriend after Piazza was taken away by an ambulance on the morning of Feb. 3. “He looked fucking dead.”

-“At the end of the day, I’m accountable for it all,” Young said in the text messages. “I’ll be the one going to court, paying for an attorney, and maybe put in jail.”

-“Also the guys taking care of him didn’t call an ambulance right away so they could get into trouble for negligence,” he added.

-A day after Piazza died, Young texted another member of the fraternity, saying the chances that the university would shut down the chapter were “very high.”

“I just hope none of us get into any lawsuits,” Young said. Beta Theta Pi has since been banned from returning to the Penn State campus.

-In texts to his girlfriend, Casey also expressed concern about going to jail because “hazing is a huge thing.”

“Drink hazing can send me to jail for organizing the obstacle course,” he said, referring to one of the activities during the bid acceptance night. His girlfriend then told him to “make sure no one says anything” about the obstacle course to people outside the fraternity, according to text messages read out in court.

“Don’t worry, it’s all staying in the house. Like only the brothers know,” Casey reassured her.

-According to Scicchitano, Casey’s Google searches on the day Piazza died included “how to delete a group on Facebook,” “dead Beta pledge Pennsylvania State University,” and “how would nine drinks in an hour affect a 200-pound guy.”

-Another message exchange between two Beta Theta Pi members on Feb. 3 suggested the brothers knew they were in trouble for hazing Piazza, Scicchitano testified.

“It’s not the fact that he drank,” Gary DiBielo, who is charged with aggravated assault and involuntary manslaughter, among other counts, texted another brother, Greg Rizzo. “He drank because we hazed him too. Main word being hazed.”

-Braxton Becker, a defendant who faces one count of tampering with physical evidence, texted another brother on the day Piazza died: “It’s awful Jeff. We got sloppy. Nugget for the last few days was saying we shouldn’t get the kids this fucked up on the first night but no one listened.”

There’s no doubt “hazing” has become kind of a catch-all term that groups trying to ban fraternities forever have latched on to any time there is drinking involved – but if ever there was a time it was completely deserved, it’s this Penn State tragedy.  Hazing in its most dangerous form – forcing a kid to drink so much that he hurts himself, beating on him while he’s hurt, then standing by and doing nothing except try to cover your own ass when he’s clearly in bad shape.

This whole story is fucked.