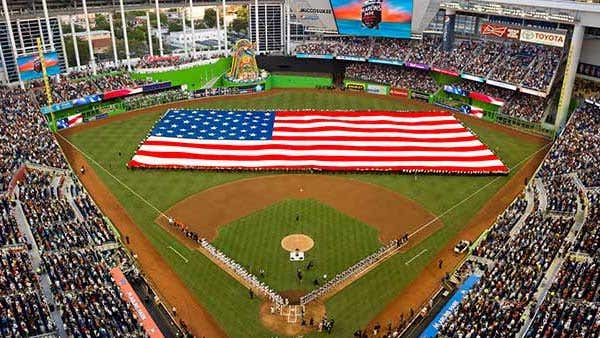 Tonight is the Home Run Derby, which means it’s time to analyze the dimensions of this year’s venue and its gambling implications, because nothing says you’re a degenerate like putting down a day’s earnings on one of the three days a year where there isn’t a professional sports game going on.

First of all, Marlins Park is unusually large. There will be few cheap pop-up HRs down the line, and they’ll really have to shit on one to get it out to center. Because of this, baseball’s two foremost freaks of nature, Giancarlo Stanton and Aaron Judge, are heavy, heavy favorites. That means of course you have to bet contrarian and go with somebody like Mike Moustakas or Miguel Sano, which makes it inevitable that they embarrass themselves in the first round and laugh it off, blissfully unaware of your irrational anger and determination to root against them for the rest of their career.

The bigger story here is what lies beyond the wall. Let’s start with the contraption slightly left of center.

Remember the “It’s a Small World” ride at Disney World? Throughout the ride, your attitude goes from “This is pretty neat” to “Ehh” to “If I see one more marionette dance to this annoying ass song I’m heading straight to the Tower of Terror and hoping it crashes.” This is the same emotional progression you’ll experience tonight. You can only take so many rotating Dolphins and neon lights before you’ve had enough. I would say that at least “It’s a Small World” is replaced by the soothing sound of Chris Berman saying “Back back back… Gone!”, but he retired from commentating the derby. We’ll see what Karl Ravech has in store.

Unfortunately, Marlins Park is a dome, so we won’t have the satisfaction of watching people borderline drown each other fighting for balls like they do in the Allegheny River in Pittsburgh or McCovey Cove in San Francisco. In place of this, there’s a pool attached to the club in left field. 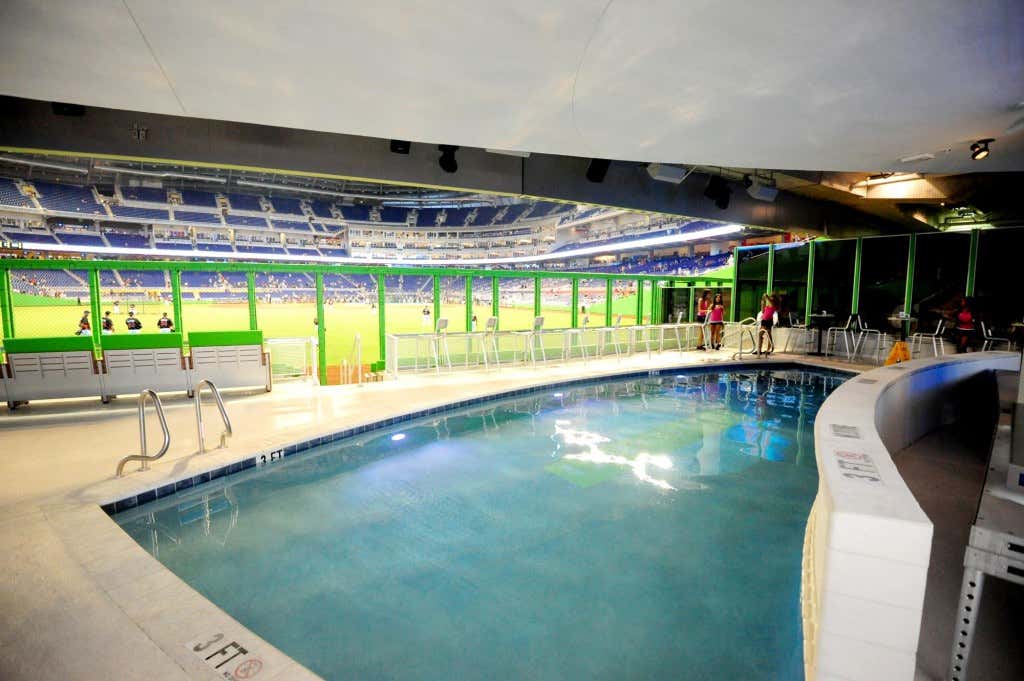 This will likely be filled with people wearing baseball gloves, which would be an odd sight, but if the swimmers ignore the action on the field, there’s a decent chance someone gets hit in the head. If we don’t get the cruel satisfaction of witnessing that, there’s always the one man child shagger on the field who savagely trucks littler kids in the pursuit of lazy fly balls. Survival of the fittest, I guess.

Here’s to superhumans with Hulk-sized forearms hitting baseballs farther than we normal people hit our 6-iron.