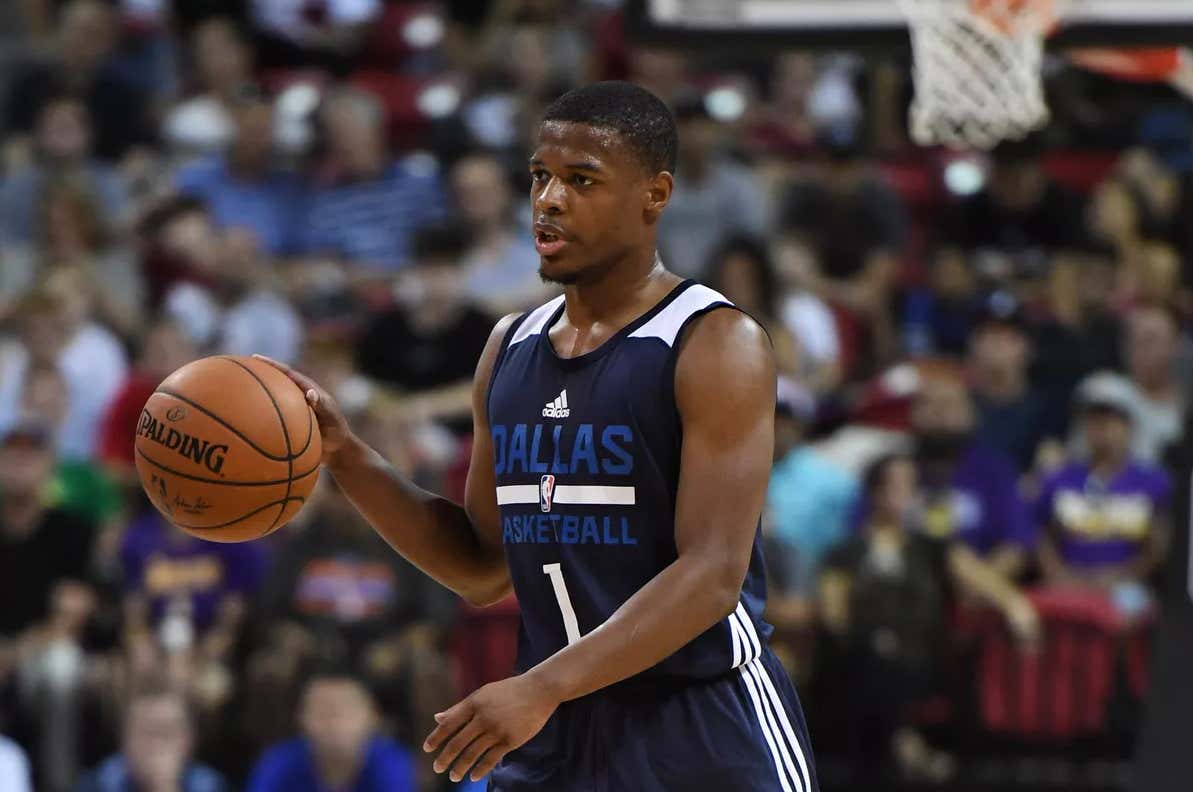 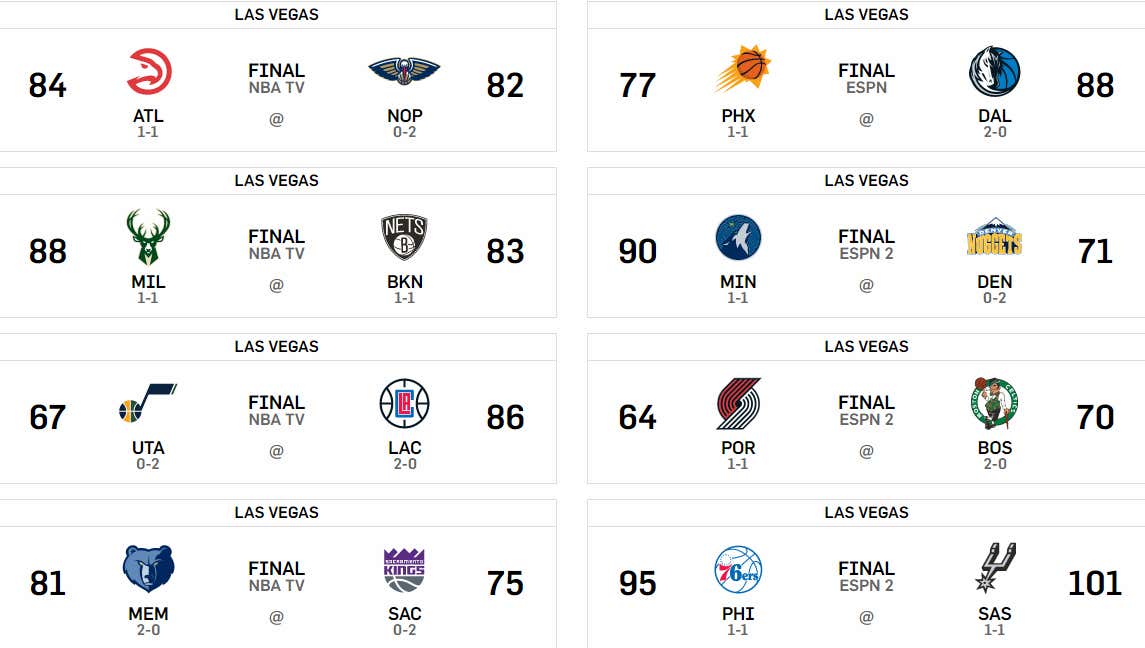 As a Knicks fan I advise you not to read this section. Dennis Smith Jr., will always be the one that got away when he fell to No. 8 and the Knicks passed on him for Frankie Nicotine. Josh Jackson, arguably the most versatile defender in the rookie class, spent most of the day yesterday guarding Dennis Smith Jr. It didn’t work out so well for him. DSJ put up 25 points, 8 rebounds, 4 assists and 4 steals along with 5 turnovers (not a surprise with his game). What made the game so surprising was Smith’s ability to drive to the rim. He didn’t settle for outside jumpers and beat Jackson – and whoever else – guarded him quite easily. This was something we saw a lot of:

There was that group of bigs all lumped together in the late lottery with Bam, John Collins, Justin Patton and Jarrett Allen. Out of that group, Collins was the most polished offensively – at least that was the consensus heading into draft – and he looked the part yesterday in the Hawks win over the Pelicans. Collins, who played mostly in the low post or in a pick-and-roll set at Wake Forest, showcased a couple of midrange jumpers while scoring 22 points and grabbing 10 rebounds. If he continues to show confidence in his jumper, he’s someone who you can play at either the four or five spot. Oh, he also can do this:

Bryn Forbes is one of those dudes who will always light up the summer league. That’s the reason he set a Spurs record by being the first undrafted rookie to play at least 30 games during his first year with San Antonio. The former Michigan State product dropped 35 points in the late game against Philadelphia including going 17-for-17 from the free throw line. During his first two games in Vegas, Forbes has 53 points on 45% shooting. He’s going to be in the rotation for the Spurs and be one of those guys who is exactly why the Spurs are good.

That bounce pass though made me gasp.

Vegas Summer League – Today’s Schedule; What Could Have Been 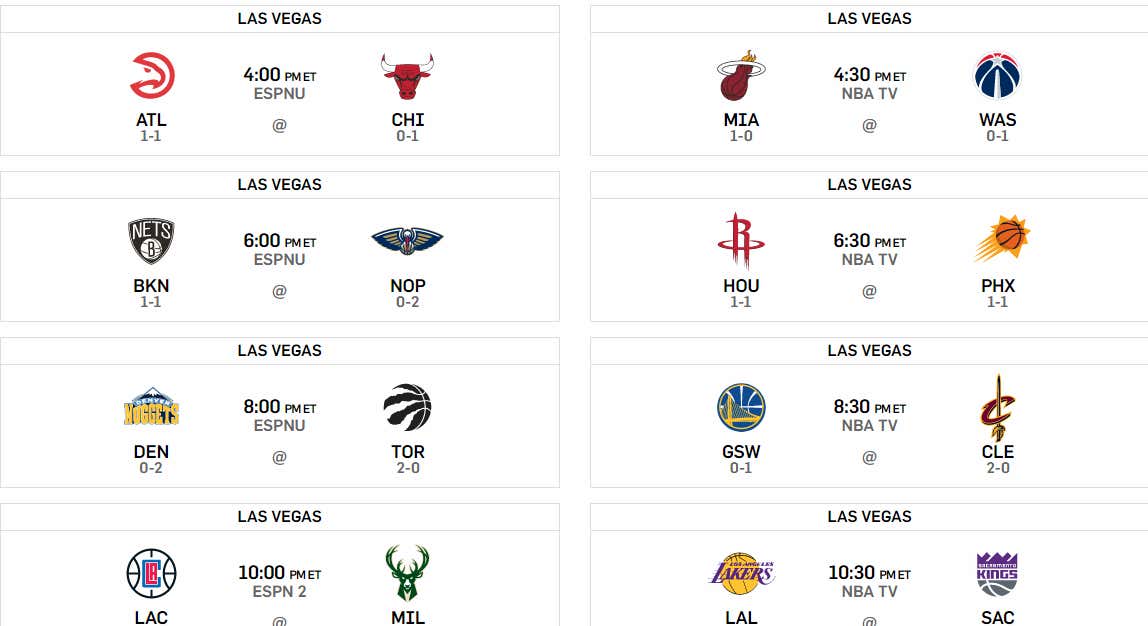 Can I interest you in Lonzo Ball vs De’Aaron Fox? Unfortunately I can’t because rumor is Lonzo Ball will not be playing tonight, which is a shame because this is one those individual rivalries that will be incredibly fun going forward as they played each other twice in college and their dads have already mouthed off about each other.

Strong response by Fox before deleting it though: 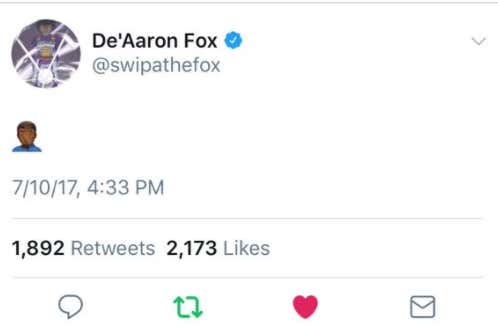 It’s not a secret they don’t love each other as they are two of the top point guards and players in their respective class. But, they are both wildly entertaining players who can drop a triple-double at any point. Watching Sacramento last night, this play by Fox had me rewinding the TV as he keeps the ball on a string before making the lob.

I do want to watch the Clippers at 10, especially Sindarius Thornwell. He’s obviously coming off a huge year and a ridiculous NCAA Tournament and should find himself in the rotation in LA, because they need help on the wings. He’s someone who can dominate summer league just due to experience and already being ready to contribute. I want to see how he attacks the glass and what moves he uses against a longer Milwaukee team.

Toronto Gets CJ Miles in Trade

This is an important get for the Raptors – who will contend for the No. 2 spot in the East. They were able to get CJ Miles due to the salary dumping of DeMarre Carroll to the Nets, in which the Raptors now have an established 3-point shooter. With the loss of Patrick Patterson, they don’t have many options to spread the floor as DeRozan prefers the midrange to the hoop.Miles is coming off a year where he shot 41% from the 3-point line and gives the Raptors someone besides Lowry to step out and shoot. The Pacers do take on the $15.5 million contract of Cory Joseph, but it also lets the Raptors develop Delon Wright and Norman Powell – who are younger and cheaper than Joseph.

Alan Williams Resigns with the Suns:

This is a really nice get for the Suns, who keep the young core together. Williams is just 24 years old and to get him on just a $17 million deal is pretty cheap when you look at the value across the board. Williams is coming off a year in which he played 47 games, averaging 15 minutes per game and put up over 7 points and 6 rebounds a game. All of those numbers will go up as the Suns will now have to decide what to do with Alex Len and Tyson Chandler. Len is currently a restricted free agent and Chandler is under contract for two more years. This seems pretty good:

The Bucks continue to have a type. Moore is a 6’8″ forward who can step out and shoot the ball (42% from three last year at Utah State). This is the beauty of the two-way contract though, it lets guys like Moore and those who will show out in Summer League train with the NBA teams and then work on their game in the G-League, all while being on two different pay scales. They have a chance to make $250,000 in their first year, which is more than reasonable. This is the second (each team is allowed two) two-way contract the Bucks offered, with the other one going to former Wisconsin star Bronson Koenig.

This is a great signing solely because it’s the Spurs. They’ll find a way to make the 6’11” Frenchman useful because that’s what the Spurs do. This is his fourth team in as many years after having his most successful year in Denver a couple seasons ago. But, he’s still just 25 and the Spurs need to add depth and youth to the frontcourt, so it’s worth the low risk. Now the question is what happens with DeWayne Dedmon.