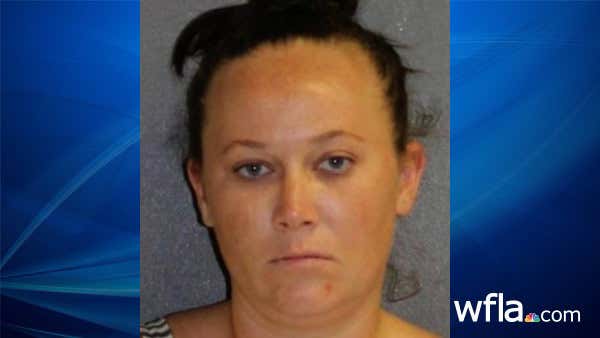 SOUTH DAYTONA, Fla. (WFLA) – A mother accused of leaving her 5-year-old son inside a hot car while she shopped complained to police that “it was hot” inside a police cruiser.

South Daytona police told WESH in Orlando that the temperature inside the car was 107 degrees.

A bystander said she saw the boy and heard his cries from the one window his mother left cracked open.

“He was hanging onto the steering wheel and just screaming. It broke my heart,” she said.

Police and firefighters rescued the boy and then waited for his mother. Colleen Walker, 30, told officers she spent 12 minutes shopping at the Dollar General, but security video showed her inside for 28 minutes.

Officers put Walker in one of their cars and took her to jail.

When police arrested her, she told officers to put on the air conditioning because it was “too hot.”

There’s nothing that I love more than a little weekend shopping trip to the Dollar General. Love that place. Deals on deals on deals. I could go on and on about my love for the dollar store but there are no free ads. If Dollar General wants a ringing endorsement, they are gonna have to pay for it like everybody else.

That being said, it’s easy to see how Colleen was lost in a world of deals. 28 minutes is a rather short time to be in the dollar general. Walking down the aisles and seeing baked beans are a dollar a can leaves you in a state of bewilderment. Every turn there’s more deals.

That’s why you simply can’t leave your kids in the car at the Dollar General. You think you’ll be in there for 12 minutes and the next thing you know, half of your afternoon is gone.

In all seriousness, though. I don’t get how stories like these still happen on damn near a daily basis.

And talk about no self-awareness. If you are getting your ass hauled into jail for leaving your child in the hot car, you might just wanna suck it up in the back seat for a few minutes. How? How are people still that stupid? Just take your dumbass kids in the store with you. Pretty simple fix.

Ps: Mom, if you’re reading this, I still remember you leaving me in the hot car. Just going to get bread and milk my ass. You had part of an ice cream sandwich on your mouth when you came back! Why couldn’t you share? Why?