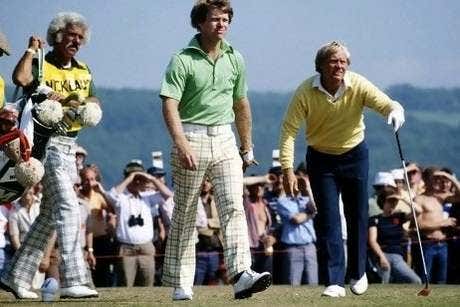 Tom Watson and Jack Nicklaus separated themselves from the field and put on a show for the ages at Turnberry for the final round of the 1977 Open Championship.

It’s a duel for the ages at Turnberry in Scotland, as Tom Watson edges Jack Nicklaus to win the Claret Jug for the second time in three years. The two golfers separated themselves from the pack and had one on one duel in the sun. Watson shots a four under par 31 on the back nine, beating Nicklaus by one stroke with a (-12) 269. It is the second major title of the year for Tom Watson, who had won the Green Jacket at the Masters three months earlier.

On bright sunny day in Scotland, it was two of the biggest stars in golf that shinned at Turnberry, in the final round of 106th Open Championship. Jack Nicklaus and Tom Watson appeared to be joined at the hip from the start of the tournament. In the opening round, each shot a two under par 68, and stood two strokes back of John Schroeder who had an opening round 66. On a rough course on Thursday’s second round, both Watson and Nicklaus had pars and found themselves one stroke back of leader Roger Maltbie at the midway point in the tournament. Moving day, was the theme of the third round, as Jack Nicklaus and Tom Watson surged to the top of the leaderboard. Each shot a five under par 65 and went into the final round tied at seven under par, three strokes clear of the remainder of the field.

On Saturday’s final round all eyes were on Tom Watson and Jack Nicklaus, as the rest of the field struggled. While Watson and Nicklaus were carving up Turnberry, everyone else was stuck in the high grass, as Hubert Green was the only other golfer to finish the tournament with a under par score, finishing at with a one under 279, which was ten strokes behind Nicklaus who finished second. The day started well for Jack Nicklaus, who took the lead on second hole with a birdie, as Watson got off to a slow start with a bogey. Nicklaus added a second birdie on the fourth hole to extend his lead to three strokes over Tom Watson. With the tournament, slipping away Watson found his stroke, recording birds on three of the next four holes to square the tournament once again. However, at the turn Watson made another blunder bogeying the ninth hole, and stood one stroke back at the turn.

While Tom Watson had his ups and downs on the front nine with three birdies and two bogeys, Jack Nicklaus was strong and steady recording two birdies and seven pars. Nicklaus would continue his steady play on the back nine, extended his lead to two strokes with a birdie on the 12th hole. Jack Nicklaus would record a bogey free round, as his four under 66, would have been good enough to win most days. However, Tom Watson went on a birdie barrage to finish the Open Championship, with four birds in his final six holes. Watson caught Jack on 15th hole with a monstrous 60-foot putt and the two were tied heading into the 17th. Each golfer had makeable birdie putts, while Watson was smooth with his putter again, Nicklaus made his first mistake of the day, two putting from four feet out to settle for par. Now trailing by one stroke heading into the final hole, Jack Nicklaus showed he was not going down without a fight as he rescued a bad tee shot and made a great shot out of the rough to get the ball on the green, where he nailed a clutch 40-foot for a birdie. However, Watson was strong and steady getting the ball on the green in good position, where he could easily answer, Jack’s clutch putt with a birdie of his own to finish with a five under par 65.

Jack Nicklaus, who won record 18 major championships in his career would recover to win the Open Championship for the third and final time in his career in 1978. Tom Watson would win the Open in 1980, 1982 and 1983 to become the first American born golfer to win the Claret Jug five times, and the fifth overall. The other five-time winners, are Harry Vardon of Jersey who has a record six championships, James Braid of Scotland, John Henry Taylor of England, and Australian Peter Thomson.