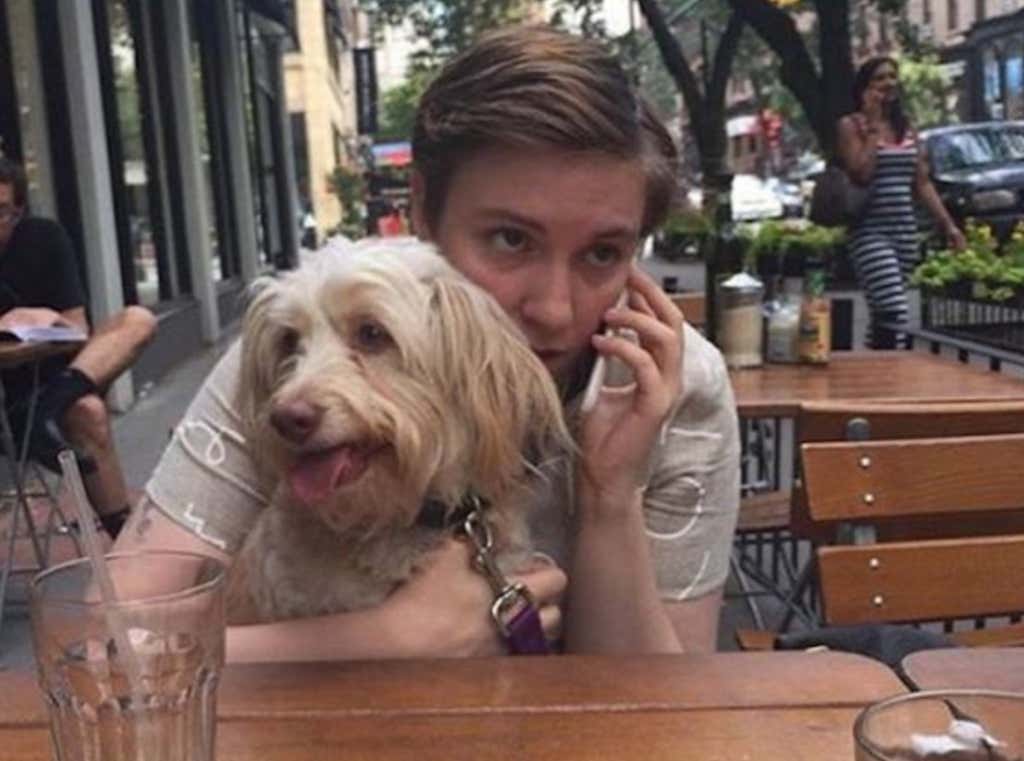 I know it’s a Friday and everyone is scrambling to finish up work and head out of town for the weekend, but this is a story that just couldn’t go un-posted.    And with resident Lena Dunham expert currently wrapped up in Radio I’m going to have to throw it up.

Here are the basics:

Lena Dunham adopted a rescue dog 4 years ago and, in the most humble way possible, wrote 1 bajillion words about it in the most overwrought New Yorker article ever. 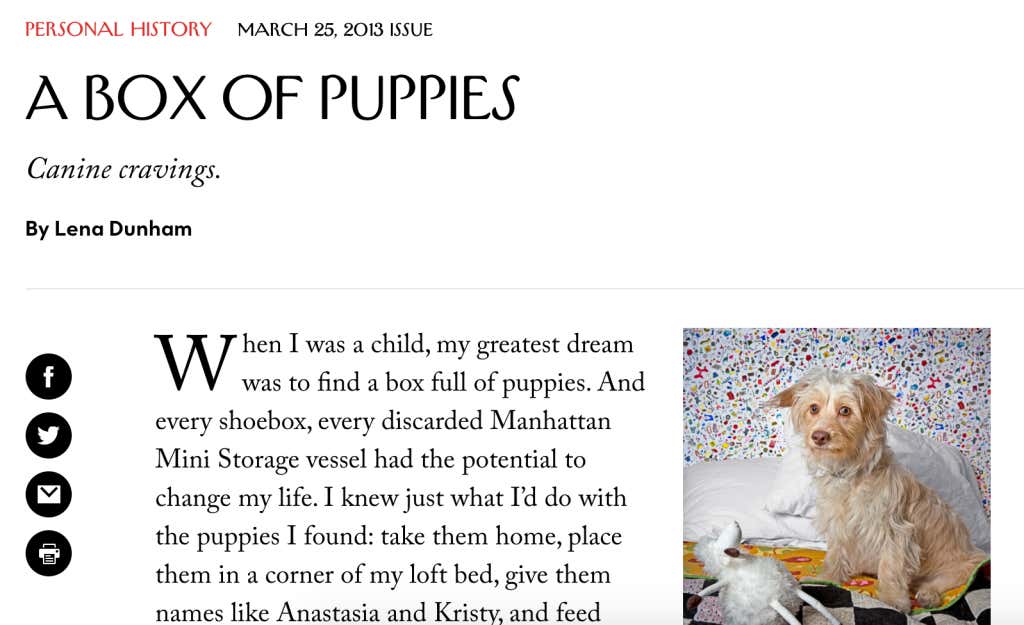 In March 2017, Lena apparently returned the dog – Lamby – to that same shelter because of “behavioral problems.”  It was aggressive and biting everyone, allegedly.  She claims it was because Lamby came from 3 different homes and 3 different owners and, try as she might, she just couldn’t get Lamby to behave.

A lot of you have been asking where Lamby is these days since he’s always been the star of my gram and I’ve been posting pics of my poodle girls. Well, you know honesty is my jam but this one has been really heartbreaking to talk about. But I feel I have to share that last March, after four years of challenging behavior and aggression that could not be treated with training or medication or consistent loving dog ownership, Lamby went to live at an amazing professional facility in Los Angeles @matt_thezendog where an awesome person named @therealdanishay (who is educated in a rescue dog’s specific trauma) loves him so hard. Lamby suffered terrible abuse as a pup that made having him in a typical home environment dangerous to him and others- we needed to be responsible to ourselves, our neighbors and especially our beloved boy. Jack and I will miss him forever but sometimes when you love something you have to let it go (especially when it requires tetanus shots and stitches.) Someday I’ll really write about the pain and relief of letting Lamby go off and really be Lamby, biting and peeing in his own mouth and all. There were so many lessons in it, about forgiving myself and loving with an open palm and giving in to a larger plan. Shout out to @jennikonner for listening to endless hours of Lamby pain, and especially my partner @jackantonoff for loving him even when he ruined floors and couches and our life. Jack knows what Lamby means to me and he let me come to the decision in my own time even when it made his days challenging. Susan & Karen will never be my first loves, but they are fuzzy and hilarious stuffing for the hole Lamby left and we cherish them deeply #lamby #thefirstcutisthedeepest #foreverlamb PS If you have a similar situation, please know its possible to responsibly re-home your rescue rather than sending them back into the shelter system. It can require patience, diligence and often a financial contribution but there are solutions that leave everyone happy and safe. You will always have been your dog’s first stop outside shelter life and that’s beautiful.

On June 21, the Girls alum shared on Instagram her “heartbreaking” decision to give away Lamby to an “amazing professional facility” in L.A. to be cared for by someone “educated in a rescue dog’s specific trauma.” Dunham noted that “Lamby suffered terrible abuse as a pup,” which “made having him in a typical home environment dangerous to him and others” and she and boyfriend musician Jack Antonoff “needed to be responsible to ourselves, our neighbors and especially our beloved boy.” They also needed to save their home, as the dog “ruined floors and couches and our life.”

Think that’s the end of it?  Lena got 4 years of Instagrams and thinkpieces out of a sweet puppy but just couldn’t do it anymore and reluctantly gave it back? Not so fast.  Because the shelter responded, and to put it bluntly:

A spokesperson for BARC Shelter in Brooklyn — where Dunham adopted Lamby in January 2013 before going on to make the dog a star by detailing his adoption in a New Yorker article, showing him off in magazine spreads like Vogue, and spotlighting him on her Instagram feed — has a different story though. For starters, the pet didn’t have a long history of abuse prior to Lena bringing him home. “We checked the records for Lamby,” Robert Vazquez told Yahoo Celebrity via email. “He was ‘owner surrendered, not enough time,’ so we do not know where she got ‘multiple owners that abused the dog.’” (In her New Yorker piece from March 2013, Dunham said the dog had “three other homes, three other names, but now he’s mine mine mine.”) At the time of his adoption by the star, the dog was just 1 “nearing 2-years-old” — and he didn’t have a history of being aggressive. “When she adopted the dog from us, it wasn’t crazy,” Vazquez continued. “I have pictures of the dog loving on Lena and her mom, which is weird if the dog was abused. It wouldn’t be cuddling with her or be in the bed with her ‘boyfriend’ in the pages of Vogue.” (Lamby appeared with Lena in a 2014 Vogue spread, which also featuring her co-star Adam Driver. The dog, which seemed like a trained pro, was with the pair on city streets, in bed, and chilling with the pair in the bathroom.) Vazquez says he personally was there “the four times Lena visited Lamby” prior to the adoption “because I’ve been in-charge of the dogs for the last 14-15 years at BARC. If Lamby had a bad past or was abused, do you think BARC would have adopted him to Lena knowing she’s a new star and put her — or the dog — in that situation? We would have told her if the dog had issues. We are a no-kill shelter. We don’t lie about the dogs’ histories because that gets them returned — and mentally it’s not good for dogs.”

And, wait for it…

The BARC rep said, “It’s just hard to believe the dog was nasty when she took Lamby to every green room with her when Girls was still a thing 4 years ago.”

Oh my fucking god. Insert all the mic drop GIFs.  Not only could Lena have no knowledge of the dog’s history like she claimed, they also have a ton of visual evidence that the dog was perfectly calm and adjusting to every possible type of environment.   Oh, and that “Girls” diss.  Unreal.

Don’t you dare think Lena wouldn’t have the last word on this.

lenadunham It’s come to my attention that the staff at the shelter where I adopted Lamby have a very different account of his early life and behavioral issues than I do. While I’m sorry to have disappointed them, I can’t apologize. Lamby was and is one of the great loves of my life. When I met him I knew we’d have an amazing journey. But his aggression – which was unpredictable- and his particular issues, which remain myriad, weren’t manageable, at least not by me. I did what I thought the best mother would do, which was to give him a life that provided for his specific needs. He’d been with me for nearly four years and I was his mom- I was in the best position to discern what those needs were. After countless hours of training, endless financial support and a lot of tears he was given access to a better life. I still support him financially and I’ll always be there for him in every way but he’s notably happier in his new surroundings.
Why should this story be subject to scrutiny and anger? It is willfully misunderstanding the truth. I hope those judging can imagine the incredible pain of letting go of your favorite creature on EARTH because you know you can’t help them be healthy and happy. I would never say an unkind word about the staff of BARC, what they do is amazing and life saving for these animals- but we have different accounts of Lamby’s behavior and they were not present in my home nor did they live with him for an extended period. They did not witness the consistent and responsible care I provided.
I have weathered a lot of micro-scandals but this one hurts MOST, because of the vulnerability of letting people know Lamby and my story, and because I miss him so damn much. This is the painting that greets me every day when I walk into my home. This is the animal who taught me about loving and letting go.
I know I’m a lot of fun to place your issues on, but I won’t let anyone hang their hat on this peg. Not this time.