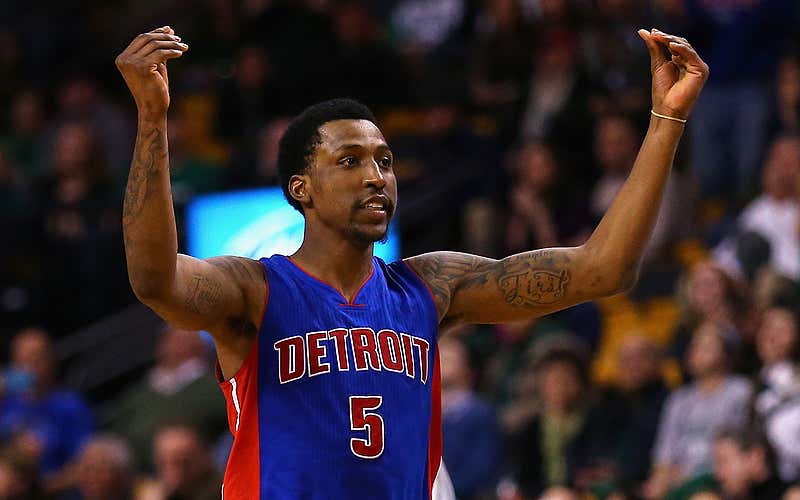 Well, with the trade for Avery Bradley, this all seemed like a guarantee. Throw in the fact they made the Langston Galloway signing official, there simply wasn’t a lot of money to go around for KCP. The Pistons were hard-capped with that move.  It’s a weird yet somewhat expected move by the Pistons. They are pretty much saying they don’t buy into KCP as a long term successful wing and more importantly how well he can create his own shot. He’s a career 33.4% 3-point shooter and averages over 11 a game for his career. So with him as an unrestricted free agent now, two teams who would likely make a move to sign him (the Nets and the Knicks) currently can’t due to money being tied up in offer sheets for Otto Porter and Tim Hardaway Jr., respectively. I highly doubt the Hawks match Hardaway, which means you could see them make a push to bring KCP back home as he is a Georgia native. Either way, Detroit is rolling with Kennard and Bradley on the wing for this year.

This is somewhat significant as it’s two years of a fully guaranteed contract. But, at the same time it makes a ton of sense for the Hawks to do this. They need to rebuild and Dorsey is a young guy with a ton of potential, the question is how does he do taking care of the ball at the NBA level. During his two years at Oregon he averaged over 14.1 ppg while shooting 41.6% from the 3-point line. At 6’4 he has the ability to play off the ball in Atlanta while providing shooting – something the backcourt lacks, especially if Hardaway does go to New York. Right now that’s going to be his role. He’s a catch-and-shoot or pull up off a bounce guy. Regardless for the No. 41 pick to get a fully guaranteed contract is a pretty nice bonus as they usually have somewhat partially guaranteed deals. Smart on Atlanta to commit to the rebuilding process as Dorsey is just 21 years old.

A quick look at today’s schedule: 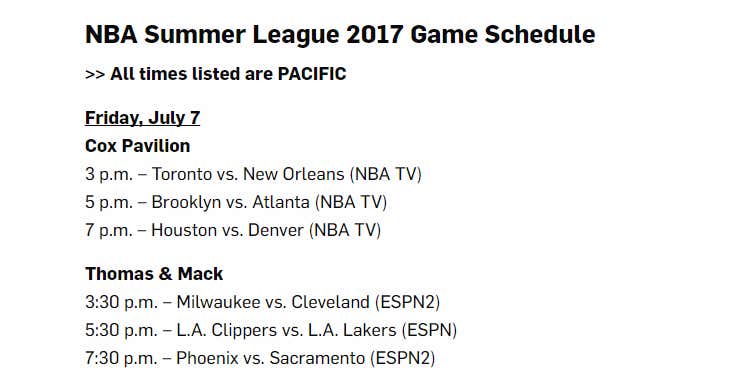 Right off the bat we get a couple juicy games, starting with the Clippers and Lakers at 5:30. The Lakers will obviously have Lonzo Ball and Brandon Ingram, but I’m interested to see how they use Josh Hart and Thomas Bryant. Hart is a guy that can spot up and shoot or slash into the lane. With guys surrounding him that can shoot, it will be somewhat similar to his offense at Villanova. As for Bryant, he was a guy that would have been a first round pick a year ago, came back to school and fell to the second round. He did improve his shooting, but how will he translate to the NBA? The Clippers have a couple of pieces here that will be intriguing as the season goes on – most notably Jawun Evans and Sindarius Thornwell. Evans is going to get pushed down the depth chart a little bit with the addition of Teodosic and Beverely, but he’s a guy that can come in and give you offense off the bench. Thornwell will have a chance to be a rotational player due to the weakness on the wing – even with the signing of Gallinari. Regardless Evans vs Ball is going to be all sorts of fun to watch during a happy hour.

Then for the nightcap we get the No. 4 pick Josh Jackson vs No. 5 De’Aaron Fox. More importantly we have two young teams, with a young core that’s going to play up and down. I’m interested to see how the Kings use Harry Giles in the summer league and more importantly how fluid he looks after struggling at Duke coming back from injury. The Kings have a good number of starters and guys in the rotation playing in the summer league including Fox, Buddy Hield, Justin Jackson, Skal, Frank Mason, Giles, Malachi Richardson and Papagiannis. The Suns will have Jackson, Bender and Chriss out there (Ulis and Peters are injured), and I’m anxious to see how Jackson looks on the offensive side of the ball. He’s going to be the best player on that roster so will he continue to attack and more importantly will his shooting (way up in the second half of last year) still be there?

There are 24 teams playing in the Las Vegas Summer League this year with plenty of recognizable names. I’ll get more into the rosters as the league goes on but guys like Dennis Smith Jr., (assuming he’s healthy enough), Markelle Fultz, Thon Maker, Patrick McCaw and all the rookies will be there.

I like to picture them waiving Marshall Plumlee to sign one of the other 19 Plumlee’s. This was strictly a salary cap dumping move so they can have enough money for the Hardaway offer sheet.

Everyone knew the Celtics had to trade someone out of Crowder/Bradley/Smart to create space for Hayward. That said, getting Marcus Morris back is a weird fit. I’ve known Marcus since high school – I say this just because of how well I know his game in terms of strengths/weaknesses – and he’s not going to fit what the Celtics need. He’s not providing you rebounding strength. He’s not providing you post play. He wants to play out on the wing where he’s a career 35.5% 3-point shooter. He’s an okay defender, not someone who is going to save your defensive scheme and I know the thought process here is it’s another guy to try and slow down LeBron. He’s a career 4 rebounds a game guy and he’s not protecting the rim. Bradley was the one guy the Celtics should have tried to kept as he’s the best defender against Kyrie and the best player out of the bunch. Throw in the fact now you continue to have a logjam on the wing with Morris, Tatum, Brown, Crowder, Smart, it was just a weird return. For the Pistons, it gives them a chance to offer him an extension at 120% of his salary and keep a wing tandem of Bradley and Luke Kennard, which is really nice for the future. If they can find consistency at the point guard spot (I don’t believe in Reggie Jackson) that’s a solid core of the backcourt. It wouldn’t shock me to see Bradley walk after the season though as he’ll be a free agent. Personally I believe the Celtics would have been better off drafting Fultz/keeping Bradley than drafting Tatum and giving IT the max for the long term.

So the Kings and Grizzlies are just swapping dudes at this point, right? A $3.3 million gamble on Evans isn’t a bad thing for the Grizzlies though. They add an offensive weapon to go in the backcourt with Mike Conley who can play on or off the ball depending what you need him to do. The question with him will be how well he shoots the ball as he’s a career 29.5% 3-point shooter but is coming off back-to-back years of shooting over 35%. Memphis will likely be at a hard cap now and should contend for the No. 5/6 spot in the West. Again, getting Evans at $3.3/million for just one year is a really nice deal.