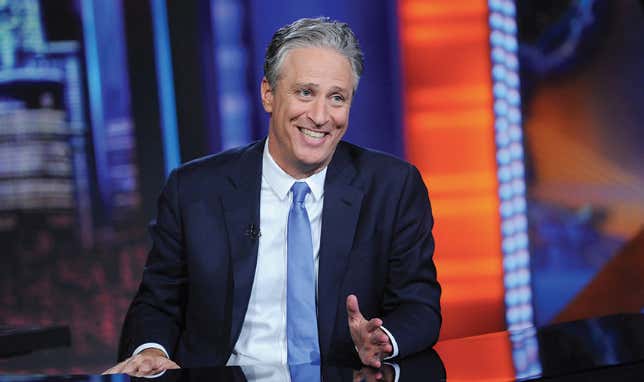 Source -  ESPN has enlisted Jon Stewart to co-anchor SportsCenter’s special coverage of the 2017 Department of Defense Warrior Games, a multi-sport event for wounded, injured or ill service personnel and veterans.

The former Daily Show host and ESPN’s Hannah Storm will anchor SportsCenter from the games’ home base at the United Center in Chicago at 7 p.m. ET on Friday, July 7. “It’s a thrill for me not just to be a part of the Warrior Games but also to work with someone who’s one of the best-known hosts in the television industry and such a great talent,” Hannah Storm said in a statement. “I’ve always been a fan of his work, and he’s so involved and so passionate about this cause.”

The world needs more Jon Stewart. It’s been too long since we’ve seen him behind the desk. Yeah, he’s had the occasional guest spot on Colbert which is great, but he needs to be running the show. He’s too talented to let someone else drive the conversation. The Warrior Games seem like a great fit, too. Especially considering his rapport with the troops.

It strange to think that Jon Stewart, a guy who’s hosted over three thousand shows, is being called “refreshing.” But it makes sense; comedy reflects culture. The political climate was completely different when Stewart went off the air, which probably contributed his retirement. People didn’t want sharp, witty  banter they wanted celebrity charades and “egg smash.” Fast forward two years and we’ve come full circle. Americans wants someone who’s actually going to have an opinion and make fun of stuff. The old is becoming the new again. I don’t hate it. Hopefully more of the old returns to TV.

Regardless, I’m exited to watch. Not just because Stewart is hosting, that’s a bonus, because it’s great event that supports the troops. And if you’re worried it will “get to political” or he “won’t be funny,” don’t. I’m sure this is like riding a bike for Jon. Once he sits in that chair it will be like he never left.