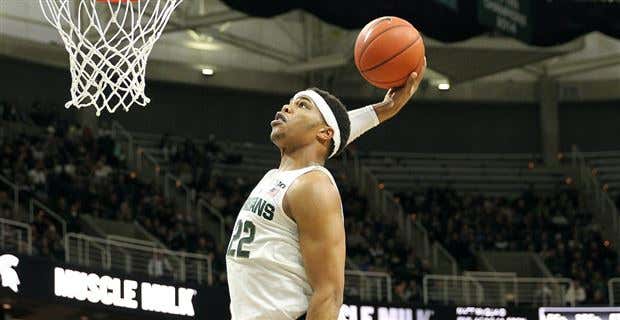 Miles Bridges is a couple of things. He’s an unbelievable basketball player. He’s going to be a lottery pick next year. He would have been a lottery pick this year. He’s also one of the most exciting dunkers in the country, at any level. He absolutely showed off last night too at the Moneyball ProAm. The Moneyball is in its 14th year of existence that includes most Michigan State players, former college players and guys who are playing overseas. Michigan State players were separated with no more than 2 on any team with Bridges being on Team Green (this was the 2nd game of the tournament) along with Tum Tum Nairn. Needless to say Brides put on a show, starting with this throwback Vince Carter tribute:

If that wasn’t enough, he won the game with a dunk at the buzzer, because of course he did:

Then there’s the NBA All-Star game pass to yourself special:

Bridges is going to be a favorite for National Player of the Year as Michigan State will be a consensus top-3 preseason team. Needless to say he’s must watch TV as he’s the best in-game dunker currently in college basketball who also happens to have a pretty well-rounded game. He can step back and shoot and take people off the dribble. Another year under Izzo will just be scary to see how good he is this season.