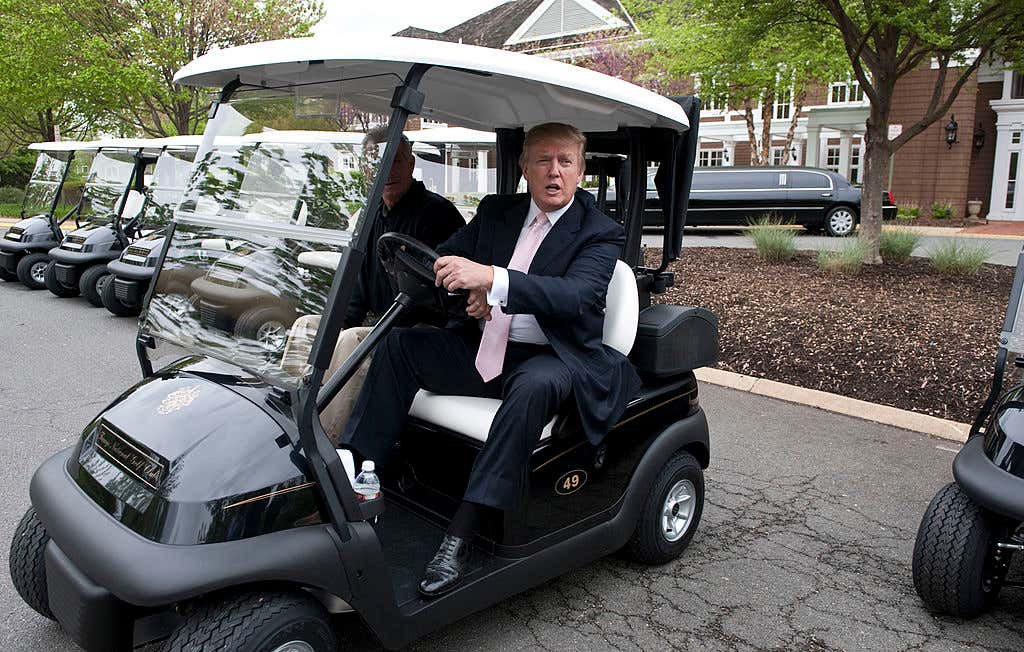 Page Six — Sources tell Page Six that years ago there was a rule at his swanky Trump National Golf Club Westchester in Briarcliff Manor, NY, that Trump was allowed to “play through” whenever he was golfing at the club — meaning he could pass other players who were ahead of him on the course.

To ensure that the real estate mogul could speed ’round the greens faster than the others, sources told Page Six that the future commander in chief “had a golf cart that went twice as fast as everyone else’s” so that he could zoom about.

At the time, a Trump source told us of the president’s supersonic cart, “This is correct, but the members love it.” The insider added, “He has great respect for them, and if they objected, he would never do it. One of the things he likes to do, when and if he plays through, is to make sure to greet the members as he passes. They really enjoy the banter, as does Mr. Trump!”

You may recall that a few weeks ago I blogged how Donnie plays golf by his own rules:

Of course he does, as he should, and here’s yet again more corroboration of this fact. Trump rocking a fucking supersonic cart so he not only play through people, but play through people as fast as humanly possible. Just Fast & Furiousing his way around the course chirping the members as he plays through every group. That’s what billionaire mogul leaders of the free world and most powerful military in the history of the planet do.

Viva La Donnie’s golf rules, and TBT to what sparked the unveiling of them all…