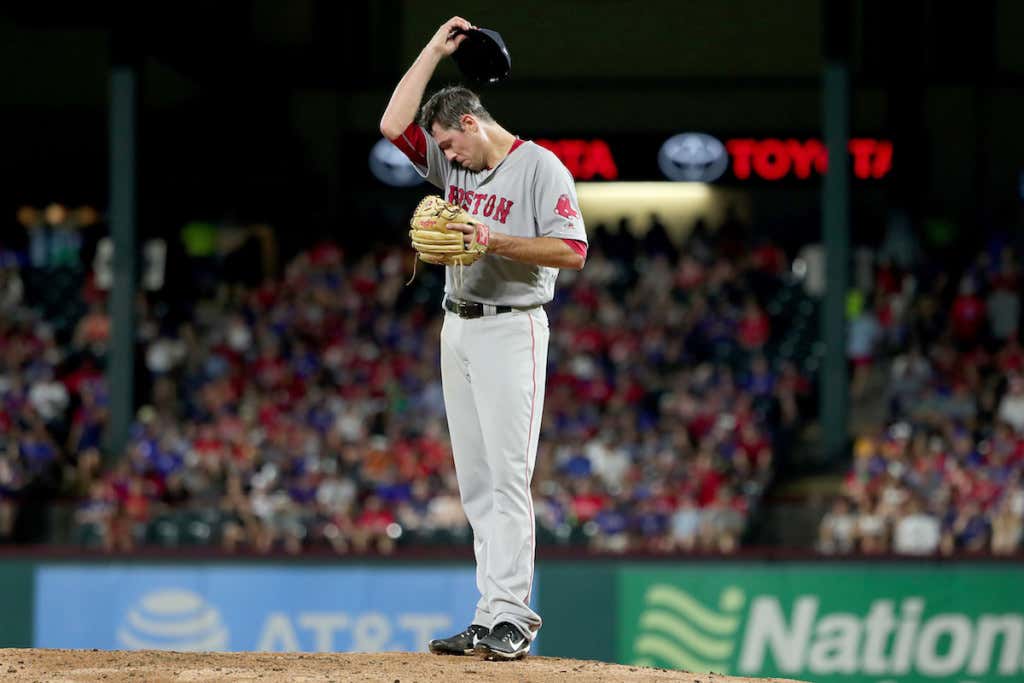 When the Red Sox picked up Doug Fister from the Angels, my first thought was that this was a commendable move by Dave Dombrowski, given that the team’s starting pitching depth left a lot to be desired. My second thought was that the nickname, blog headline, and tweet opportunities would be endless. Sadly, I just can’t bring myself to make the easy joke here — Red Sox get fisted in Texas. It’s just too easy, and easy jokes are not funny. I will say that he’s gotta be used to it by now, though, right? Like, he’s had to have come off the mound after a poor outing at least once before and thought, “I wonder what kind of references to knuckles being inserted into buttholes are being made right now?” Tough hand to be dealt; no pun intended.

I still like the Fister move, by the way. He was picked up to essentially be your number six starter, and that’s basically what he’s pitched like thus far, which you’ve needed in the absence of Eduardo Rodriguez and Brian Johnson. He gave up three earned runs in each of his first two starts, and this was the first outing that he’s struggled in, although two of his six runs were not earned. The problem for Fister last night is what we sort of saw with David Price when he struggled earlier in the year — location. In just three and two thirds innings, Fister walked three batters and gave up two homers.

Much like Rick Porcello, Fister is a sinkerball pitcher whose success greatly depends on being able to keep the ball down. Of the 89 pitches that Fister threw last night against the Rangers, 54 of them were in the upper half (60.6%), and 43 of them were in the upper third (48.3%). That means that just a quarter of his pitches (24.7%) were in the lower third. That, and both of the homers that Fister allowed were right over the heart of the plate. Also, only 48 of those 89 pitches were strikes (53.9%), so that would be your indicator right there that Fister wasn’t really sure where the ball was going once it left his hand.

In an outing like this, the scrutiny usually falls more on the pitcher when the offense is lifeless because fans just see the pitcher out there giving up a million runs and putting the game out of reach, even though the Red Sox offense did next to nothing all night. In reality, this was a piss poor performance by Boston’s lineup, but how upset can you really get over that when they’ve gotten a million hits over the last week?

Sure, you want 100% effort from your team every single night, and I’m not calling their effort into question last night, but that’s baseball. One night, you’re setting your season-high with 21 hits, and a couple nights later you’re getting no-hit through five innings by a dude who had an ERA over five last year. It happens. I’m going to cut them some slack, and you should, too. If a downward trend develops, then we’ll talk. For now, it’s a one-game offensive funk in the middle of a run for this Red Sox team that saw them go from four games down to four games up in three weeks time.

Xander Bogaerts broke up Andrew Cashner’s no-hitter in the sixth inning with a two-run bomb, his sixth. Bogaerts is in the Final Vote competition (again) to make the All Star team this year, and yeah, I’m obviously a Red Sox guy, but not only is Bogaerts not the most deserving player out of that group, he’s not even the most deserving shortstop. Not by much, but Rangers shortstop Elvis Andrus is having a slightly better season than Bogaerts at the plate. However, Logan Morrison is having a better season than the rest of the Final Vote candidates by a pretty wide margin. He shouldn’t even be in the Final Vote. He should just be on the team with the seventh best OPS (.945) and the eighth best runs created plus (145) in the American League.