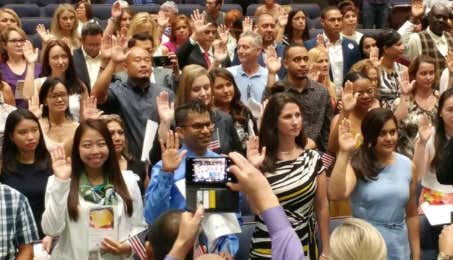 Source - Every year, the U.S. holds special citizenship-induction ceremonies on or around the Fourth of July. This year, nearly 15,000 people were being sworn in as U.S. citizens at more than 65 such gatherings across the country, according to U.S. Citizenship and Immigration Services.

They took the oath of citizenship in public libraries, national parks and museums. Some of the ceremonies were on aircraft carriers or baseball fields. One was at Monticello, the Virginia home of founding father Thomas Jefferson.

“Whenever you feel that future is threatened, whenever those values of liberty and justice for all that drew us here seem under assault, you need to speak up and speak out,” Harris said at a ceremony on the battleship Iowa in the Port of Los Angeles on Monday, according to prepared remarks. “That’s the whole point of the freedoms we cherish.”

In order to become a citizen, immigrants must be a permanent resident, or green card-holder, for at least five years; read, write and speak English; and pass a citizenship test. That test isn’t easy ? check out some of the questions ? but more than 97 percent of would-be citizens pass, compared to only about two-thirds of voting age Americans.

Imagine trying to become a citizen in 2017. Like actually try to imagine it. Imagine the effort it takes to learn a new language, a new culture, new laws, new social norms. Imagine spending years getting your ducks in a row, playing things by the book, not getting frustrated. Imagine the pressure of taking a citizen’s test knowing one wrong answer could ruin everything. Imagine living with the reality that you may have to go back to a country without free speech or freedom of press. Imagine knowing your kids might have to grow up in a place where they can’t be whatever they want, where hard work doesn’t pay off. Where the people are at the mercy of their government not the government at the mercy of it’s people.

Now imagine getting a call that your all efforts paid off.  That you’re finally going to become an American citizen. On the fourth-of-fucking-July, no less. Must be emotional to say the least. I get second hand excitement just thinking about it. Mostly because of all the things they’ll get to experience as Americans. And I’m not even talking about the fourth of July. I’m talking the weird stuff, like celebrity melt downs and Presidential twitter feuds.

America is a lot to digest. We just don’t notice because we’ve been digesting it our whole lives. It’s crazy to think how people are just taking their first bite now. Regardless, I’m happy for them and you should be too. How can you now be? Take a look at these proud Americans: