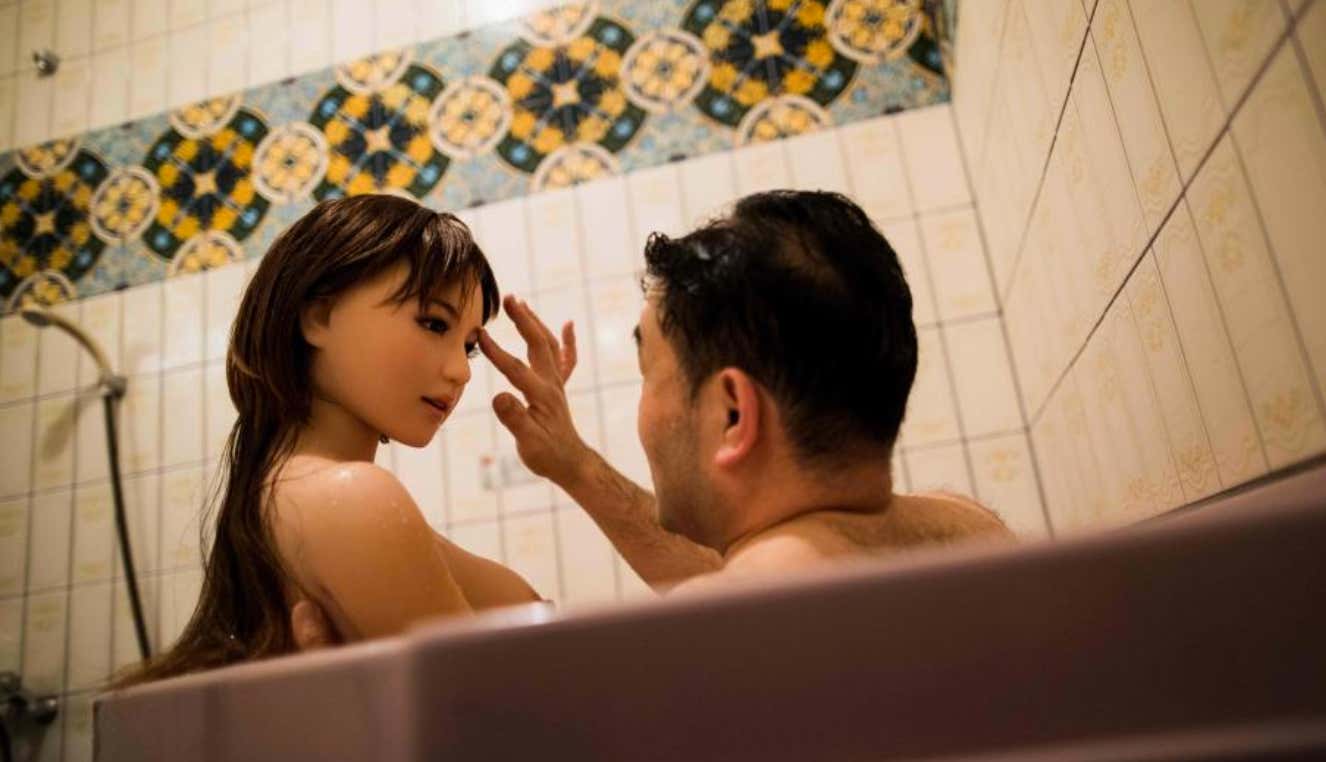 The Sun- MASAYUKI Ozaki bounced back when the spark went out of his marriage — by starting a new romance with a rubber sex doll he swears is the love of his life.

The ultra-realistic silicone dummy, called Mayu, shares his bed under the same roof as his wife and teenage daughter in Tokyo, an unusual arrangement that triggered angry rows before the family declared a delicate truce.

Masayuki, 45, said: “After my wife gave birth we stopped having sex and I felt a deep sense of loneliness.

“But the moment I saw Mayu in the showroom, it was love at first sight.

“My wife was furious when I first brought Mayu home. These days she puts up with it, reluctantly.

“When my daughter realised it wasn’t a giant Barbie doll, she freaked out and said it was gross — but now she’s old enough to share Mayu’s clothes.”

Masayuki, who works as a physio, takes his doll out on dates in a wheelchair and dresses her in wigs, sexy clothes and jewellery.

He admits to being turned off by human relationships, adding during a seaside stroll with his rubber companion: “Japanese women are cold-hearted.

“They’re very selfish. Men want someone to listen to them without grumbling when they get home from work. 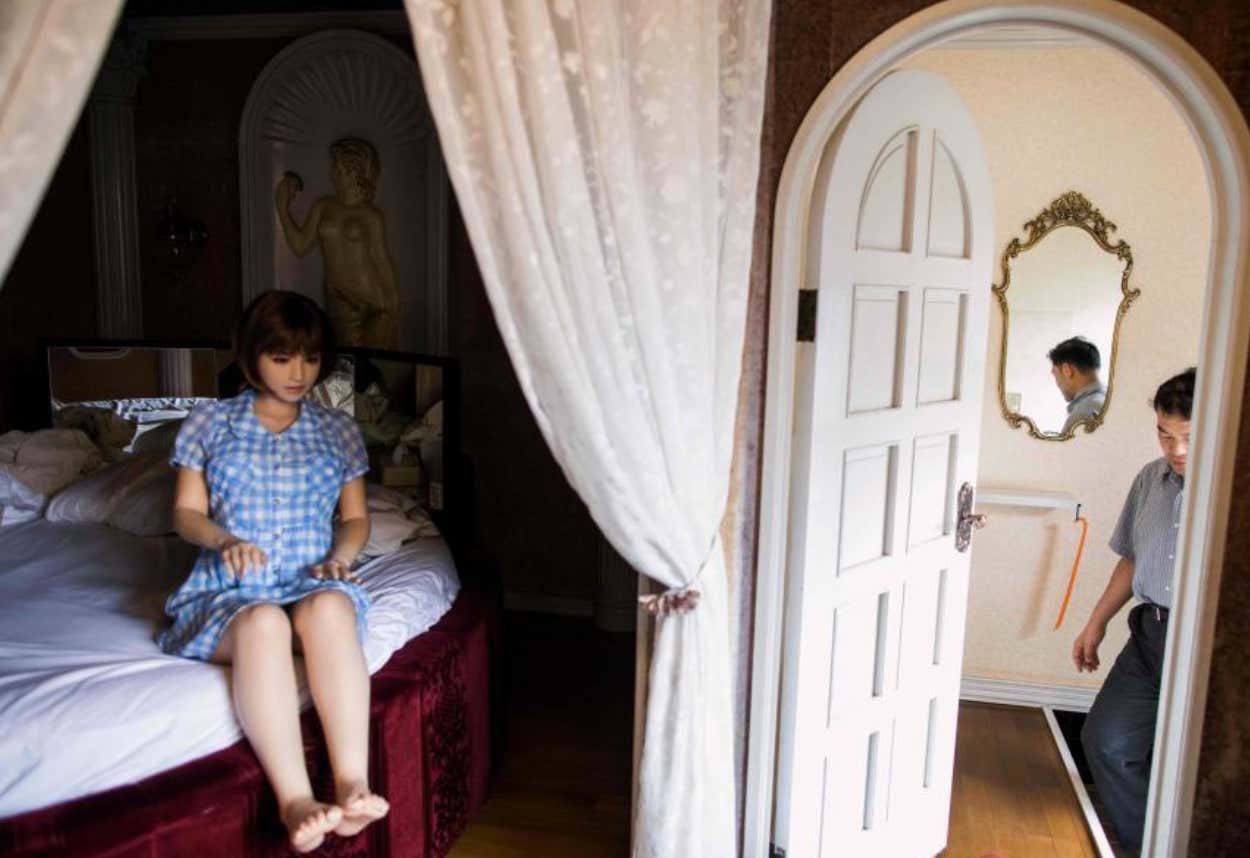 Talk about practical! What a dad. One outfit for his two girls. Would I want to be a girl wearing my dad’s fuck-doll’s outfits? No, but I wouldn’t want to be a girl either. They make 80 cents to every dollar men make and childbirth looks brutal. Maybe in 20 years or something.

You youngsters will look at Masayuki Ozaki and see a weirdo, a pervert, a warped old man. But not me. At 28, I’ve known enough heartbreak–had enough women ghost me–to recognize that Masayuki is searching for love, just like any of us. If anything, he’s an example of what you can find when you don’t give up. True love doesn’t discriminate based on age, looks, or the fact that one of you has a vagina made out of rubber. Look at this picture: 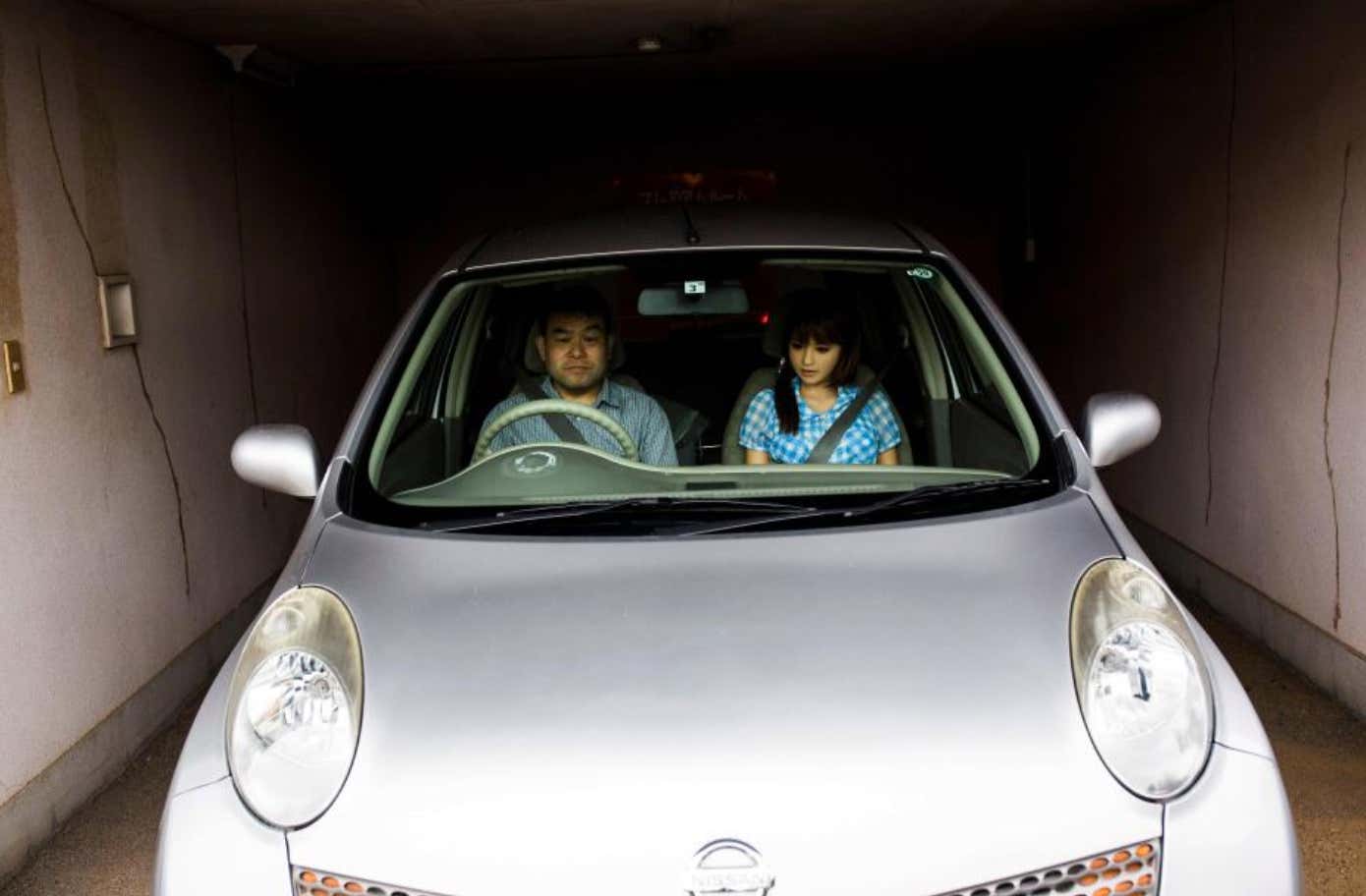 He fastened her seatbelt and she doesn’t have a pulse! That’s consideration, tenderness, and respect. I see a loving partnership. I see a girlfriend that will never insist upon taking a fifth selfie just because she looks ugly even though you look amazing. I see a quiet, dignified teammate who is just as happy letting Masa wheel her around a fancy party as she is taking a night off and letting him ride her mouth to completion.

I’m giddy over the wife’s reaction. They have a kid and she no longer wants to have sex with him so what does he do? He runs down to the local doll-maker and orders the hottest chick in Japan. Moves her into his home and completely cuckholds his wife like some mormon dad, forcing them to coexist under one roof. “She’s staying,” he says, finding his backbone for once in his life. “The door is open. I won’t stop you.”

These pictures killed me: 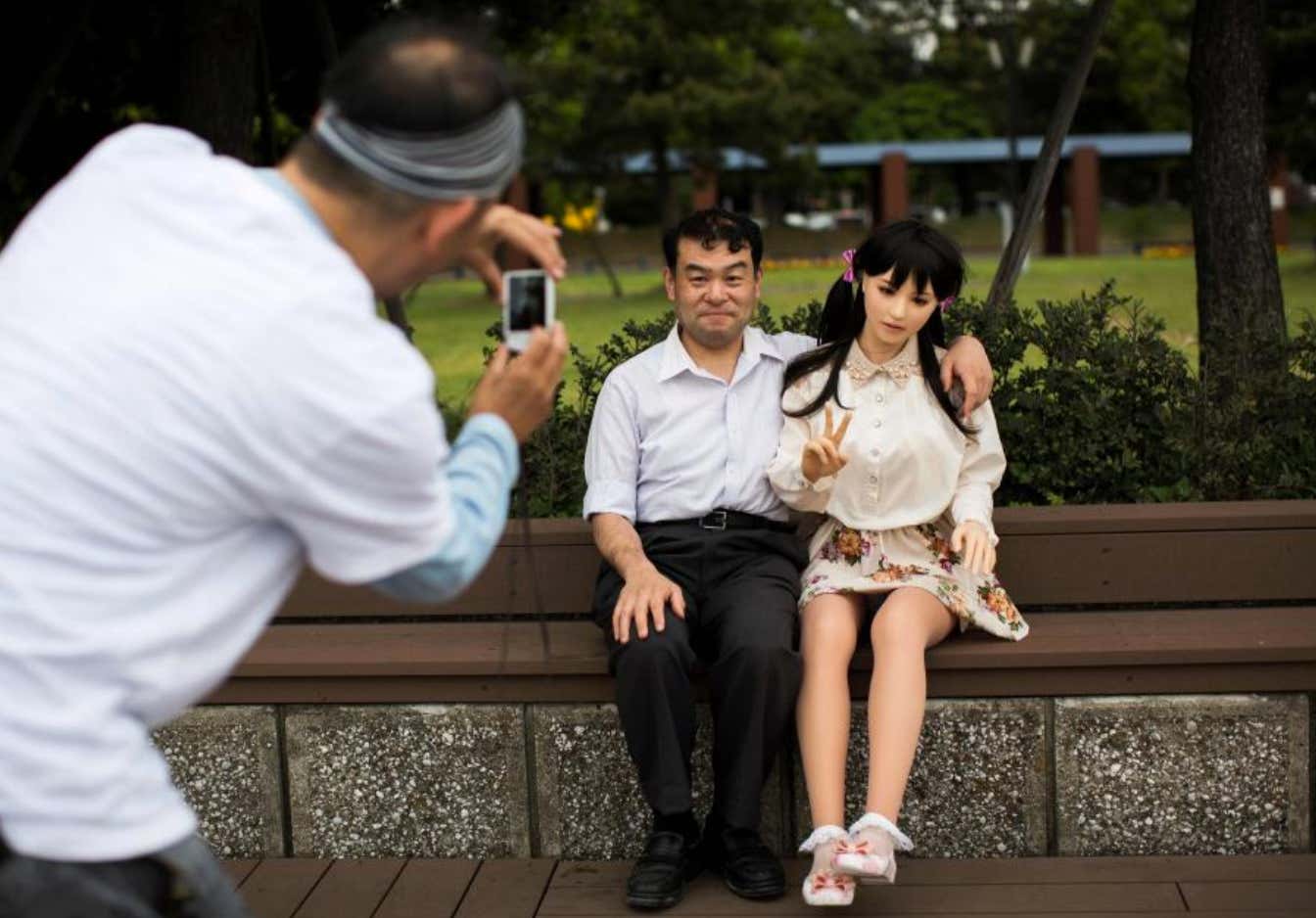 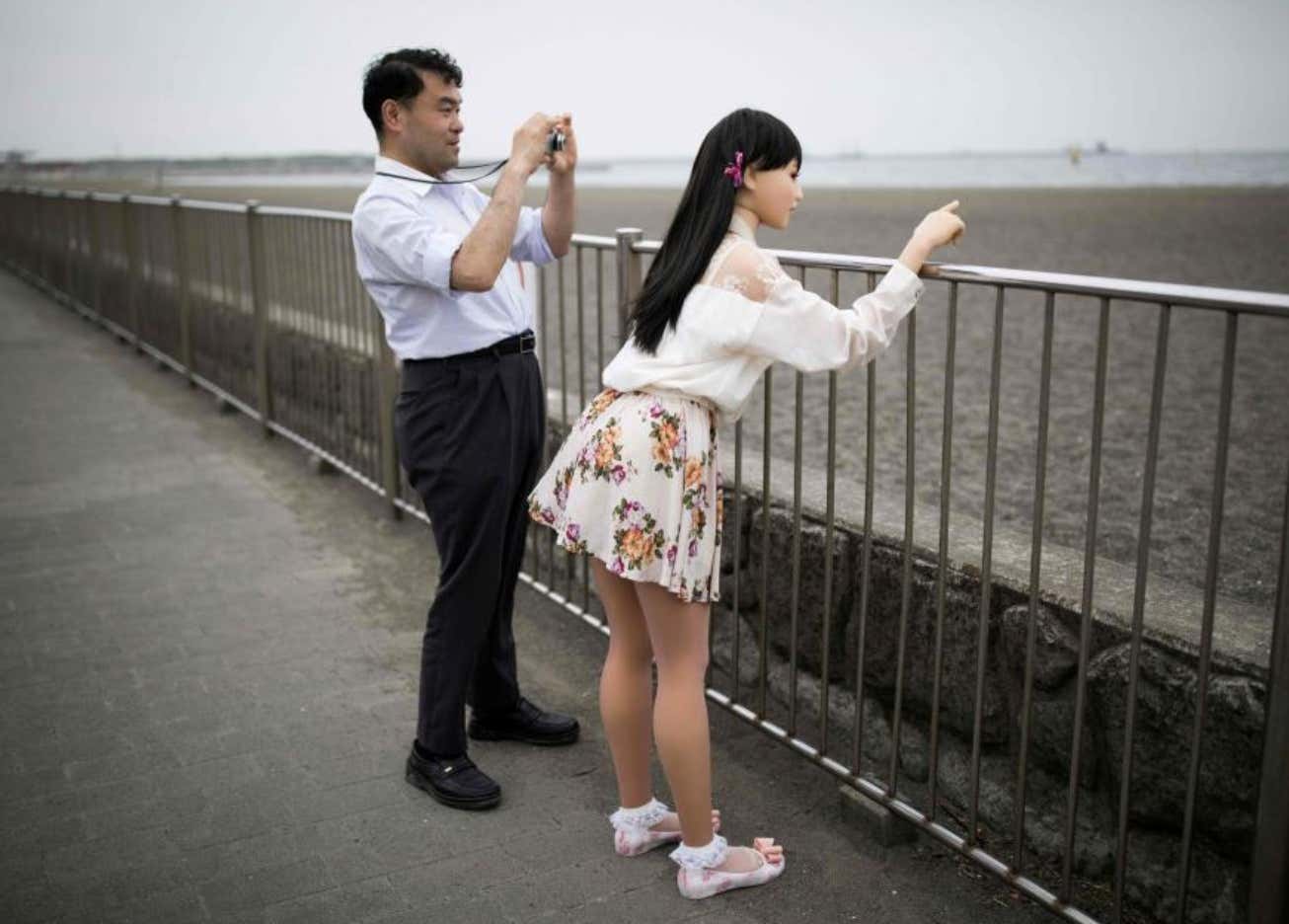 Haters will say it’s contrived, that he staged that peace sign and the point to the ocean. But I believe that somehow, deep down, Mayu wanted to pose for those pictures. Let’s let the man enjoy his perfect woman; I hope to find my own Mayu one day.

PS- One of the greatest of all time