AOL – National Public Radio dedicated over 100 tweets on Tuesday to posting the Declaration of Independence in its entirety, but some mistook the historic language as a dig at Trump.

The Declaration of Independence, which was crafted as a statement of freedom from British rule and approved by Congress on July 4, 1776, has been a symbol of U.S. liberty since the era of America’s Founding Fathers.

As a patriotic tribute to Independence Day, NPR tweeted the text of the declaration in its entirety, but some Trump supporters thought the public media outlet was aiming shade at and inciting violence toward the 45th president.

So I guess Morning Edition has been reading the Declaration of Independence out loud every 4th of July for 29 years.   That’s a pretty long running tradition.  Their big mistake this year?  Advancing into the Twitter age and putting it all in writing instead.

And so on and so forth.  Over 100 of those.  Just a massive flood of the historic document line by line.  Naturally everyone, being the 4th of July and everything, saw it as their patriotic duty to take it all in and remember the birth of this country and those who fought for it.

Well, except for those who thought NPR was putting out their call for a revolution to overthrow the government. 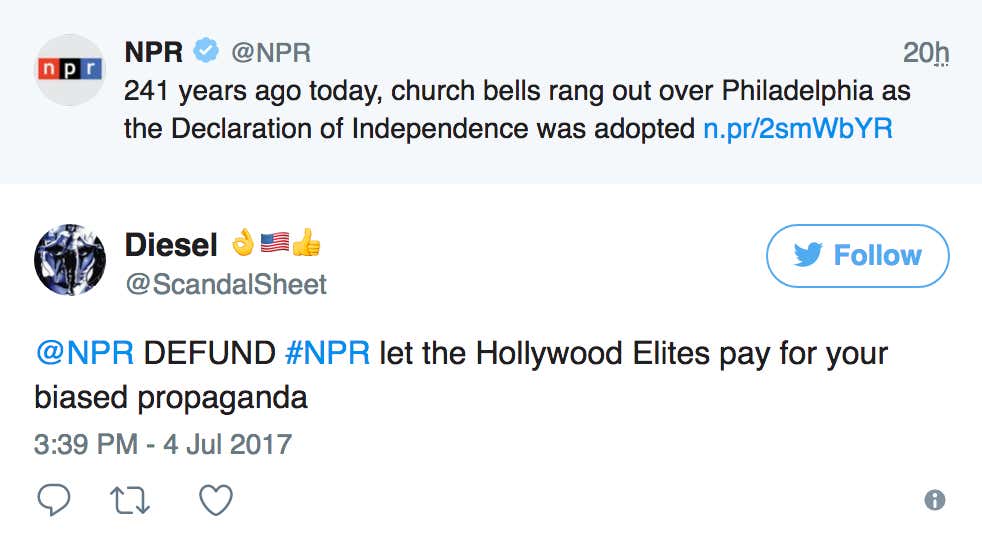 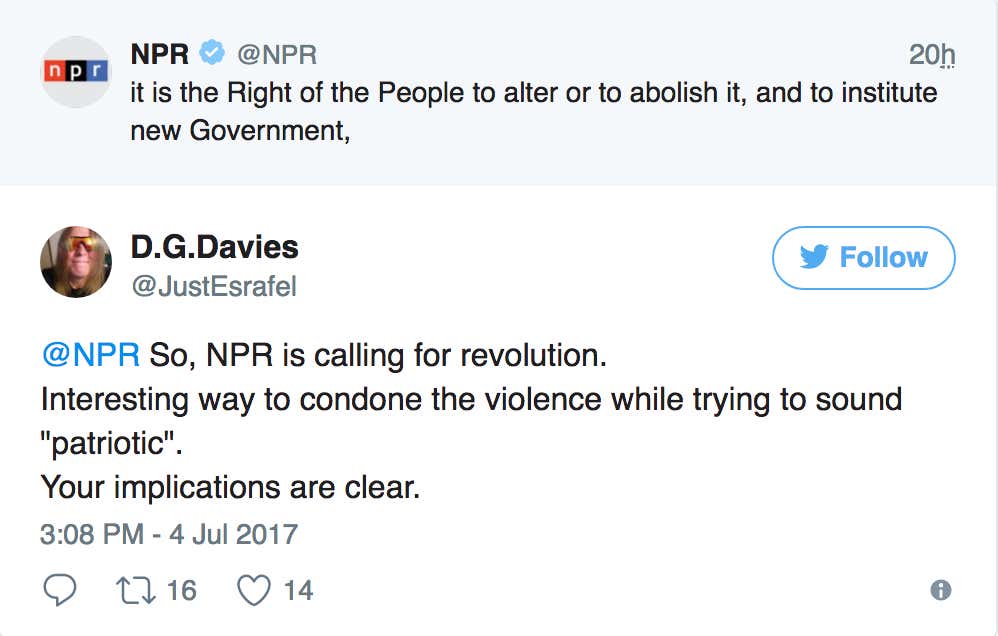 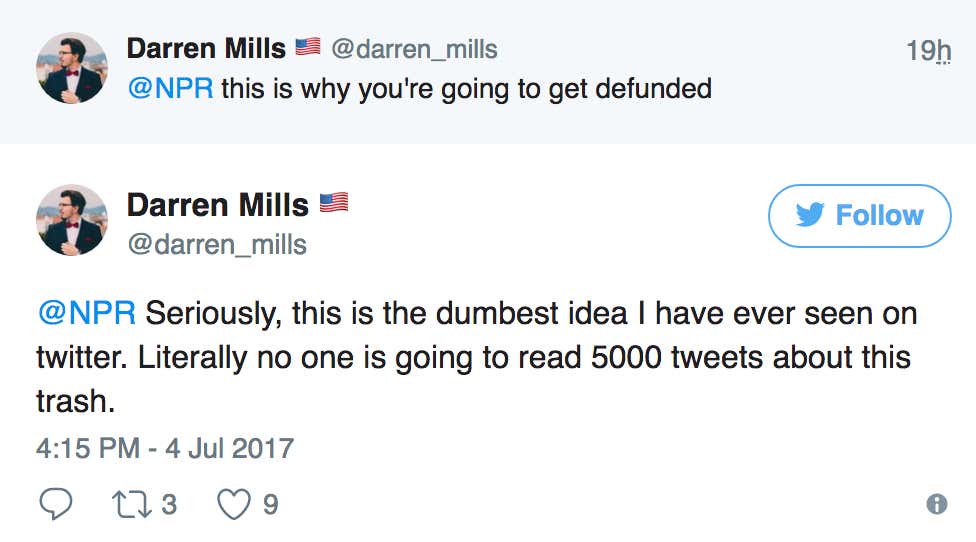 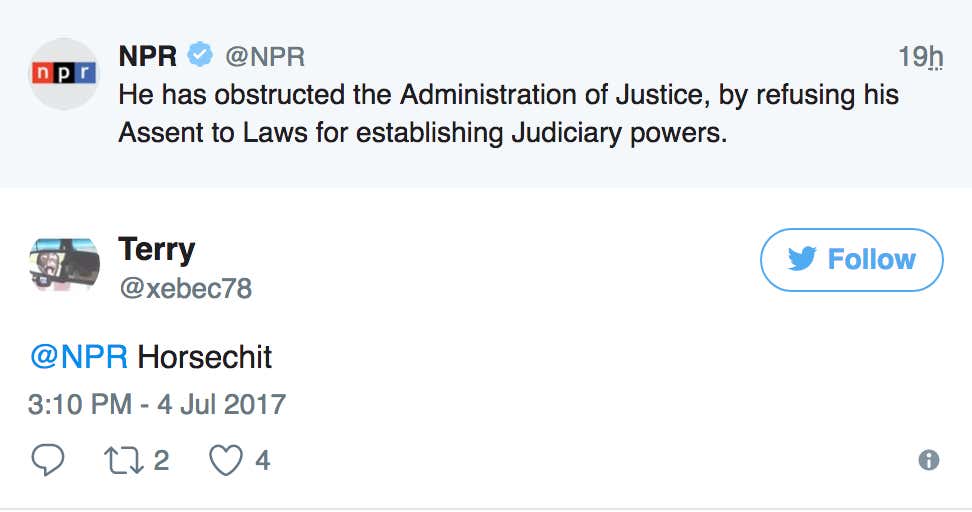 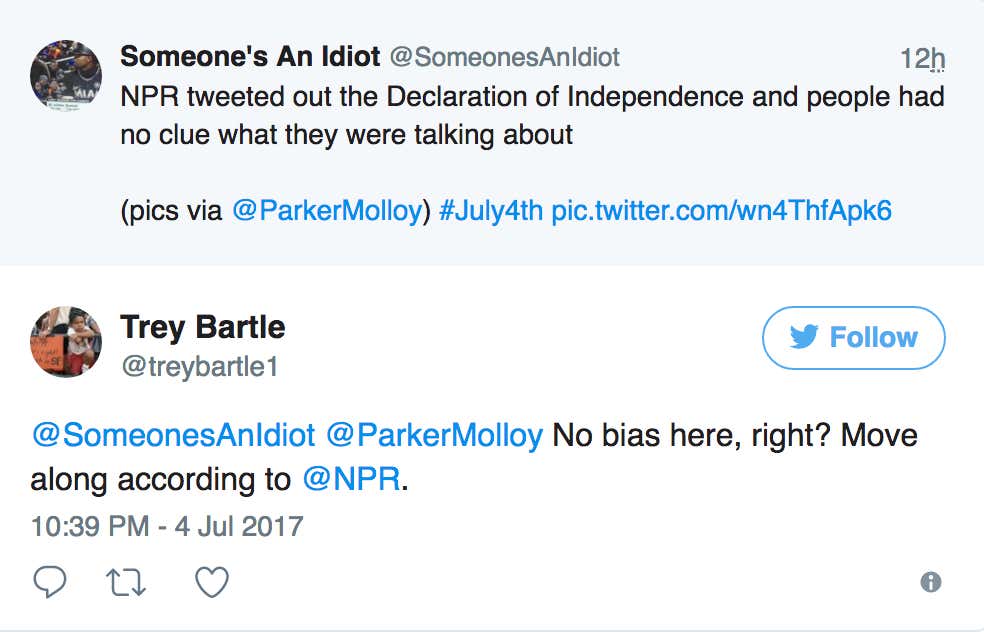 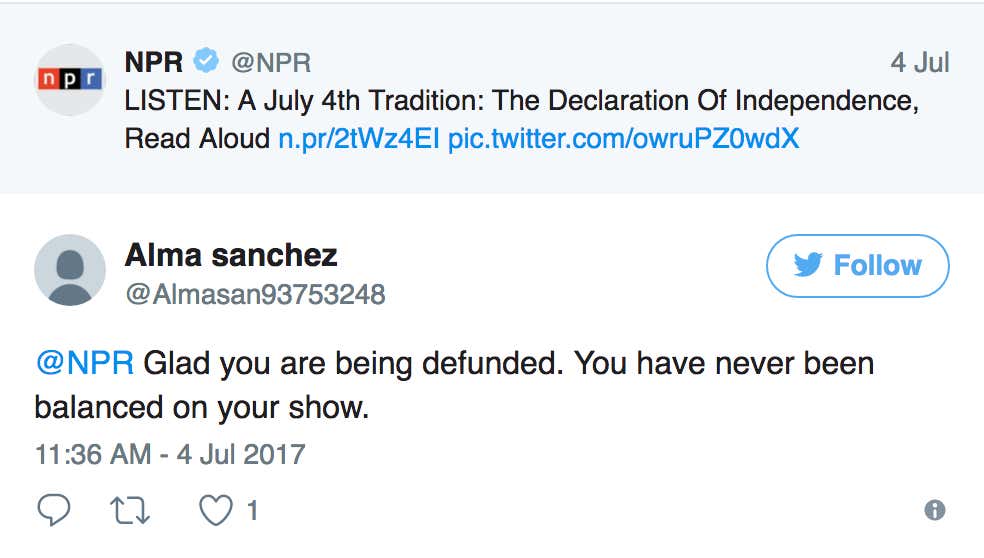 Obviously hilarious.  Always fun to laugh at idiots no matter what the topic is about.   But of course this being 2017,  these handful of morons spawned a bunch of political thinkpieces and quickly made everything wayyy too serious.

Shocker of the day coming up, brace yourselves – there are stupid people in the world.  There are uneducated dumbasses with access to the internet that are going to say dumb shit.  You can cherrypick tweets from almost anything you want and use them to frame your argument to make fun of people and define an entire group by it.  Such as every site using  “Trump Supporters” in their headlines about this, as if 10 morons who don’t know the Declaration of Independence represent every person who voted for Donald Trump.  Just chill out and laugh at the dumb people man.  Dumb people are the best.

And let’s not let the important thing get swept under the rug here – NPR tweeting out the entire Declaration of Independence is such an obnoxious Twitter move.  I don’t care if you’re the most patriotic motherfucker in the country, nobody likes a timeline that cluttered.  George Washington himself would mute these fuckers if they stated blasting his feed with historical documents line by line.