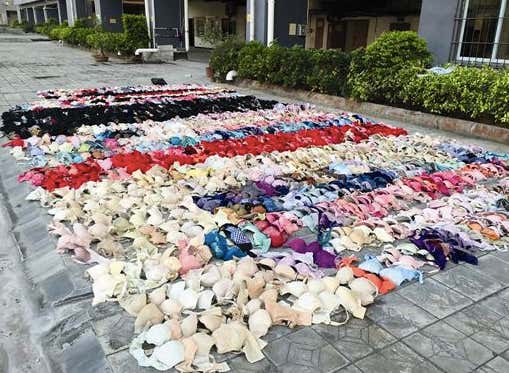 Source - Police in Tokyo said Tuesday have arrested a 61-year-old deliveryman on suspicion of stealing women’s underwear and said they had found more than 1,000 items of women’s lingerie and clothing at his home.

According to police, the suspect, Yasushi Kobayashi, has admitted to the charge and said he had been stealing women’s underwear and stockings for the past 20 years because he liked to wear them ever since he was young, Fuji TV reported.

Police quoted Kobayashi as saying that while he was making deliveries in his truck, he would often steal lingerie that been hung out to dry on balconies or from washing machines in coin laundries. Police said Kobayashi was identified by street surveillance camera footage which showed hin getting back into his truck after having stolen the items in April.

It was a good run, Kobayashi. Twenty years is a long time for any criminal, let alone a panty snatcher. Seems to me like he was asking to get caught. It would be one thing if he was creeping around the back of his truck opening packages but he wasn’t. Homeboy was literally running around in broad daylight stealing panties off drying racks. Bold move, especially considering if you get caught your life is pretty much over. How do you explain that in a job interview? “Ever been arrested?” “Yes.” “Oh something stupid when you were younger orrrr?” “I stole a thousand pairs of dirty womens underwear…” “We’ll be in touch. Thanks.”

He wasn’t even trying to sell them, just wear them. Which is fine, to each his own. If YB wants to feel the silky smoothness of a material typically reserved for womens genitals, who am I to judge? He said it himself, he’s been wearing them “ever since he was young.” Old habits die hard, I guess.

This is what I call a generational crime. Something tells me our panty stealing scrondrel has never heard of the internet. If he had, he’d be relaxing in a nice pair of Victoria Secrets, not rotting in a Japanese jail. I’m sure his grandkids are writing coding and surfing the internet. You’d think they could take five minutes out of their day to show grandpa how to buy lingerie. Nope. Pretty rude if you ask me. That being said, I hope he learned his lesson. I sure did, if you’re going to wear panties, buy them online.