If you would have told me at the start of this off-season that the Sixers would sign JJ Redick to a $23 million a year contract, I would have messed my pants, and not in a good way. Signing someone like Redick is a brilliant move—the team needs veteran leadership and shooting and he has those in spades—but committing that much money to him, and worse doing it long term, would have been a not-smart move. But when I found out that they got Redick and that it was only a one year contract, I messed my pants. In a very good way.

Having Redick on a one-year deal allows the team to develop good habits and be immediately competitive, while not paralyzing their long-term-financials. Signing Ben Simmons, Joel Embiid and Markelle Fultz to long term deals (provided they earn it) is going to be very expensive. If we were still paying Redick $23 milli a year in four years when he was 37, that would be bad cap management and the ultimate fear of a lot of fans. But we control those young players for now anyway. We had to spend that money, and indulging on a perfect fit like Redick makes a lot of sense.

JJ also gives the Sixers one of the most coveted articles in all of sport; a white guy with a full sleeve tattoo that doesn’t look overwhelmingly douchey. 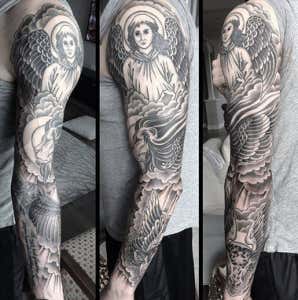 Who else is there? Jeremy Shockey? David Beckham? Jason Giambi? Birdman? I’m starting to wonder if it’s possible to have a sleeve tat and not be douchey. Somehow it seems that JJ lives in his own vortex where he has become a less of a douche with the more tattoos he gets, and with the modern NBA’s affinity for analytics, that’s a statistical phenomenon that can’t be ignored.

Meanwhile the Sixers made another savvy signing by bringing Amir Johnson aboard for a one-year contract of his own. The Sixers will fork over $11 million to Johnson, who has flown under the radar in the league since the mid-80s. In return, Johnson will provide interior toughness, a newfound three point stroke, and will hopefully teach Jahlil Okafor how to rebound. And, with a single year deal, Johnson’s contract will be up just around the time when Sixers fans start to hate him like fans did in Boston.

Mostly, the Sixers will grant themselves options next summer when they have a better idea of their own talent, as Fultz and Simmons begin to play, and as we gauge how healthy Embiid can stay.

Meanwhile the Sixers summer league slate starts tonight. That means Markelle Fultz in action in the red, white and blue, and I really can’t think of a better Fourth of July present than that.