In one of the most exciting finals in the history of Wimbledon, Bjorn Borg of Sweden beats American Jimmy Connors in five sets, (3-6, 6-2, 6-1, 5-7, 6-4). Connors who had won 1974 appeared to have all the momentum, rallying to tie the final set after falling behind 0-4. However, after double faulting in the ninth game Borg regained control as Connors flipped off the crowd in London.

It was a battle of the titans to close out the 100th anniversary of Wimbledon as Jimmy Connors was ranked #1 in the world, while Borg was ranked second. Both were seeking their second title at the All-England Club, with Borg looking to repeat his 1976 title. Connors at the time was not popular at Wimbledon as fans were turned off by what they perceived as an arrogance. This was made even worse when the number one player in the world refused to participate in a parade of champions at the start of the tournament. Bjorn Borg on the other had was very popular among the fans and had the crowd firmly on his side. The fact the crowd was behind Borg clearly rubbed Connors the wrong way.  As he was battling late in the fifth set, his frustrations got the best with him, as he lost the ninth game after double faulting. With the crowd cheering his misfortune, Jimmy Connors raised his middle finger to the fans in obscene gesture. Bjorn Borg would go on to serve out the match and win his second straight Wimbledon title. 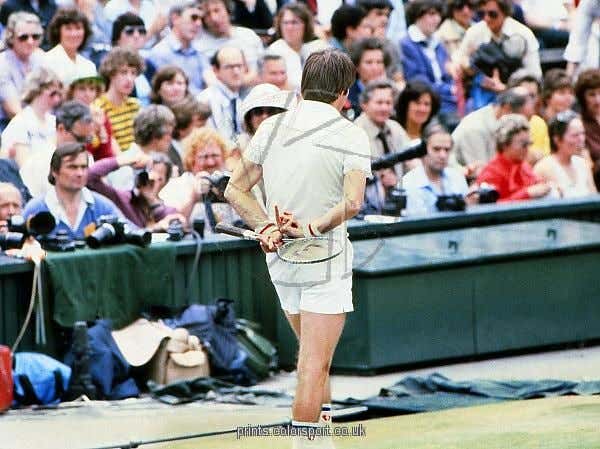 1977 Wimbledon Championships
The USA’s Jimmy Connors gives a rude gesture behind his back while talking to the umpire on Centre Court.

With his win at Wimbledon, Bjorn Borg would take over the top spot in the world rankings, he would hold the number one ranking several times over the next four years. Borg’s only Achilles’ Heel was struggles on hard courts, as he rarely participated in the Australian Open and struggled in the US Open. However, Borg dominated on grass and clay, winning Wimbledon and the French Open 11 times between 1974-1981. This included five straight titles at the All-England Club, that ended with a loss to John McEnroe in the 1981 finals. Over this period, Borg set a record by winning 41 straight matches on the grass in London.

Bjorn Borg stunned the tennis world in 1982, by announcing his retirement at the age of 26, he played sporadically over the next few years and briefly attempt a comeback in the early 90’s. He would be indicted in the International Tennis Hall of Fame in 1987.