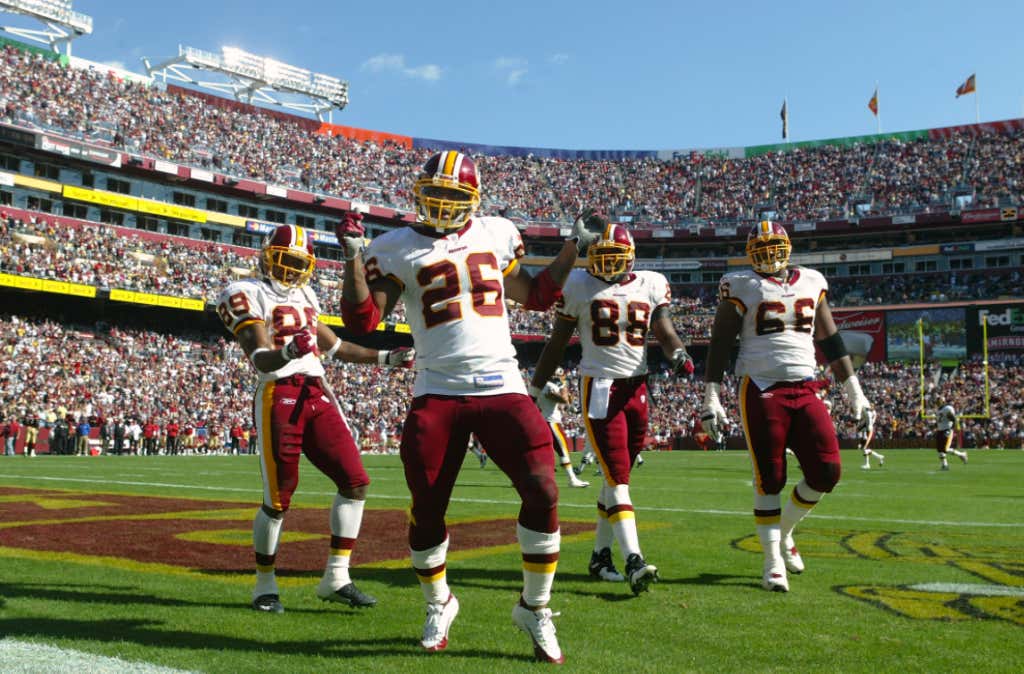 SI - Fortune pilfered, Clinton Portis contemplated revenge under the veil of darkness. On a handful of late nights and early mornings in 2013 he lurked in his car near a Washington, D.C.–area office building, pistol at his side, and waited for one of several men who had managed a large chunk of the $43.1 million he earned with his 2,230 carries over nine NFL seasons. Purportedly safe investments had suspiciously soured, and almost all the money Portis set aside to fund his future had evaporated. That future included a mother who doubles as his hero and four sons scattered across the Southeast. Their comfort and security. Their happiness.

The hucksters he deemed most responsible ignored his calls. None were bound for jail. Their coffers were dry; a lawsuit seemed pointless. Once his helplessness gave way to rage, Portis lusted for a confrontation. He would meet this betrayer not with pleas or demands, or even blows delivered by thick fists attached to thick forearms. Bullets, he thought, were his sole means of balancing the scale.

This article is fascinating. Absolutely fascinating. Clinton Portis was swindled out of the majority of his $43.1 million he made in the NFL, and then he spent some nights hoping to see one of the men so he could shoot them. The article dives deep into Portis, explaining his struggles with Sean Taylor’s death, his lavish spending habits that followed.

Taylor’s death, compounded by the loss of several other friends and family members in short succession, marked the end of Portis’s trademark frivolity. Football became a vocation; chasing accolades and solidifying a legacy proved not to be worth the concussions, the broken bones, the dislocated joints.

Portis says that sex, not drugs or alcohol, provided the salve he needed after Taylor’s death. He took lavish, impromptu trips overseas, sometimes with women he hardly knew, sometimes three or four at a time. “It was empty,” Portis laments.

As Portis’s fortune grew, so seemingly did its gravity, pulling more properties, luxuries and hangers-on into his orbit. Former teammates and friends in the league, even those of comparable means, dared not try to keep pace. “Portis was on a different level,” says former Washington teammate Santana Moss, who himself once owned 11 vehicles. “He didn’t think about tomorrow.”

Not all of Portis’s expenses were typical of what he flaunted on Cribs. He built a house for his maternal grandparents. He helped support a vast extended family in Mississippi. He bought his mother the Jaguar and the 8,381-square-foot purple abode in Gainesville, Fla., that he knew she craved. He hosted massive picnics in Florida and Virginia for anyone who wanted a free meal.

But my favorite part of the entire ideal is how the investors came from Stratton Oakmont. Name sound familiar? They are the company portrayed in Wolf of Wallstreet.

Simultaneously, Brahmbhatt steered Portis and other NFL players to invest with Success Trade Securities, overseen by his former Stratton Oakmont colleague Fuad Ahmed, whose Ponzi scheme would unravel in 2013. Nearly $14 million of those investments vanished.

I wish I hated it but I love that movie so much I don’t mind CP lost 14 million to them.

Had he seen them though? Well….

Prepared as he was to commit murder, sacrificing his freedom and his name for revenge, he never found whom he was looking for. But what if he had caught a glimpse before coming to his senses? What if their paths had crossed, there in the darkness? Portis doesn’t hesitate: “We’d probably be doing this interview from prison.”

So basically, CP blew a ton of money, was frauded out of the rest, thought about killing some motherfuckers, and now lives happily ever after with nice paying TV gigs. Wild, wild story.