I saw this video and jumped into the dashboard to blog it because it was that damn good. Legit internet gold during the summertime when things get pretty slow. I was even ready to slap a MUST WATCH on its ass because the nickname Weather Boy is soooooo fucking great and condescending. That kid appeared to rip the reporter’s heart out and eat it on live TV. Most vicious thing I have seen on the internet since Portnoy pointed in Riggs’ face and called him Bozo.

But then I started researching the video and it turns out that the kid is the reporter’s son.

What the fuck kind of shit is that? This is no ordinary reporter. Dude has to be a member of the Screen Actors Guild with a reaction like this. 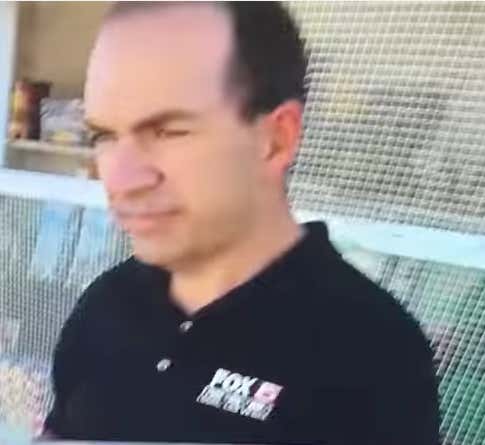 Leo DiCaprio couldn’t throw on a better face on after getting his guts ripped out. Give that man a Daytime Emmy or whatever weather boys win. Same for his son who played the “rabble-rouser who hangs out at the local fireworks spot” role to a tee. I have to respect them even if I don’t like it. In fact, I kinda hate it. I miss the old internet. The wild west. Kimbo Slice wasn’t fake pummeling motherfuckers on some WWE shit. I would probably kill myself if I found out the Mobile Leprechaun was fake. And if it came out that the D’Jais Belmar crew were a bunch of actors in Los Angeles, we would have to pull the plug on the internet as a whole, wait 15 seconds, and then plug it back in after everyone promises to not make hilarious fake videos that are intended to go viral. That’s a blatant violation of Internet Code.

Oh yeah and this guy has to be called Weather Boy for the rest of his life. It will grate on him once the shine of this video wears off and he will snap sooner or later. You don’t spit in the Internet Gods eyes like that and get away with it. You need to pay a penance for that kind of tomfoolery.