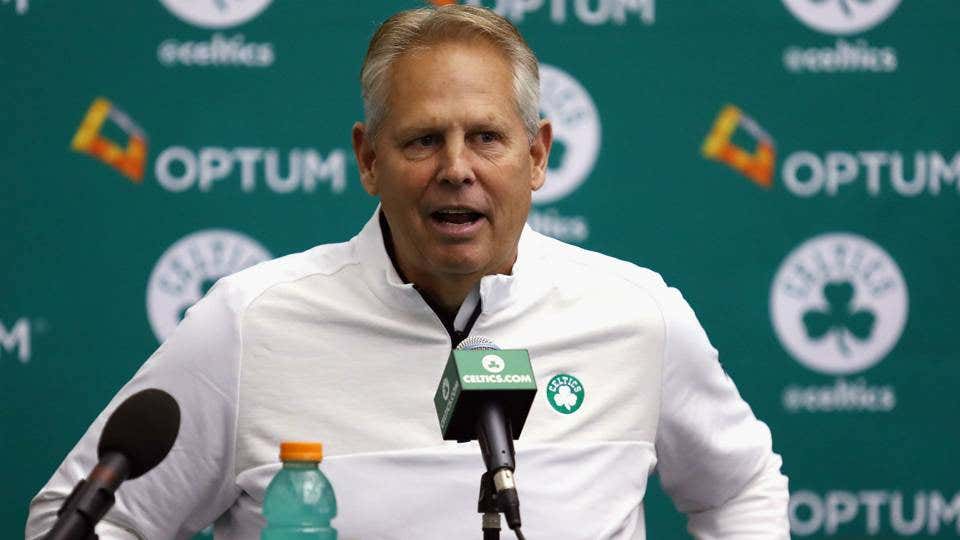 Stop me if you’ve heard this before: The Celtics were in the middle of hot trade rumors for everything from a unicorn to a All NBA player to an All Star….only to not do anything! Hilarious and sad all at the same time. This time around I tried to just have fun with these rumors without putting any stock into them because again, we’ve played this game for what seems like the last 40 years. When it was all said and done, there was no trading (yet?), and for the second year in a row the Celtics kept all their draft picks (so far). Heading into this draft, everyone brought out their favorite hot take that Ainge is in fact not good at drafting. One All Star in 38 picks they scream! Who cares about context when facts are facts right? Listen I don’t want to rehash this for the millionth time so before we move on let’s all agree on something. Ainge has missed on players. Ainge has passed on players that ended up being pretty fucking good. He’s also found legit NBA players in the later half of the draft. His average pick during his tenure is something low like #19. His high lottery picks are still TBD in terms of a final result so I don’t think it’s outrageous to say he has shown to be a B drafter.

Which brings us to last night. If you are of the camp that Ainge should have never traded Fultz, you probably walk away from the draft with the thinking that Ainge had a bad night. That’s totally fine, you are entitled to your own opinion about which 19 year old basketball player is the best one, only without ANY of the scouting material the Celtics front office had. It doesn’t mean you’re wrong, but it doesn’t mean you’re right either. After the Draft when you heard Ainge’s quotes, you could understand why they did this PHI move.

Ok first thing’s first. NO SHIT Ainge was going to say Tatum was who they were going to pick at #1 either way. That’s about as predictable as them actually not making any trades. Maybe he’s lying, maybe he isn’t, but it’s safe to say Ainge is banking on this being the right choice. Also if you missed it from today’s presser, here’s what Brad had to say

Ever since the Celts decided to pass on Fultz, in my opinion the focus shifted to Josh Jackson vs Jayson Tatum. You could argue that Jackson was a bit repetitive given that Jaylen Brown guy, and offensively Tatum certainly makes a quicker impact on that second unit which DESPERATELY needs someone who can create his own shot. That is not to say he doesn’t have flaws, he is 19 after all, but hearing Ainge talk about how things went down with Jackson, it shouldn’t really be a surprise they went they way they did

While who they took at #3 wasn’t that much of a surprise, what Ainge did the rest of the night goes a long way into how people perceive his draft went. Taking Semi Ojeleye at #37 certainly turned some heads. If you’re like me, you had no idea who this player was. I can’t sit here and tell you I saw him play one second of college basketball, or even watched one YouTube highlight video. Here’s his info 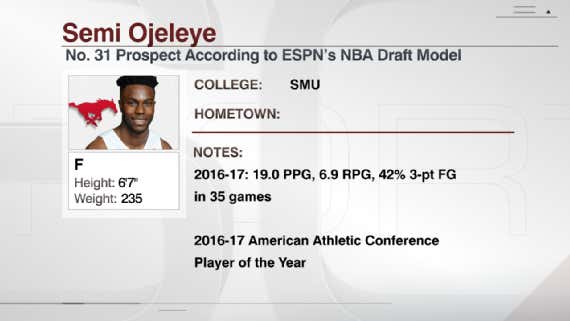 An NBA ready body who shot 42% from three in college? Yes I’ll take that with the 37th pick every day of the week. ESPN Analytics projects in his first five seasons he has a 5.33% chance of being an NBA starter and an 11.95% chance that he’s an NBA role player. I have no idea if that’s good or not compared to other guys who were taken around this spot in the second round, but at least they aren’t 0%s! As with anything Ainge seems to do, this pick wasn’t without a bit of controversy. If we can agree on one thing, it’s that the Celtics currently do not have a plethora of good big men. There are two hopefully coming this year in Zizic and Yabu, but I would have been happy if Ainge went with Jordan Bell here. A defensive monster who blocks everything despite being 6’9, there is obviously a fit on this team for a player like that. It doesn’t help that Twitter told me he was the next Draymond Green, and then next thing we know the Warriors bought the rights to him which is maddening. HEY NBA TEAMS STOP SELLING THE WARRIORS YOUR SECOND ROUND PICKS THAT WILL PROBABLY TORMENT THE NBA FOR A DECADE.

From what I’ve seen Semi’s value is around 20, so we can’t be that mad. Also, this picture made me very excited, this dude is a monster 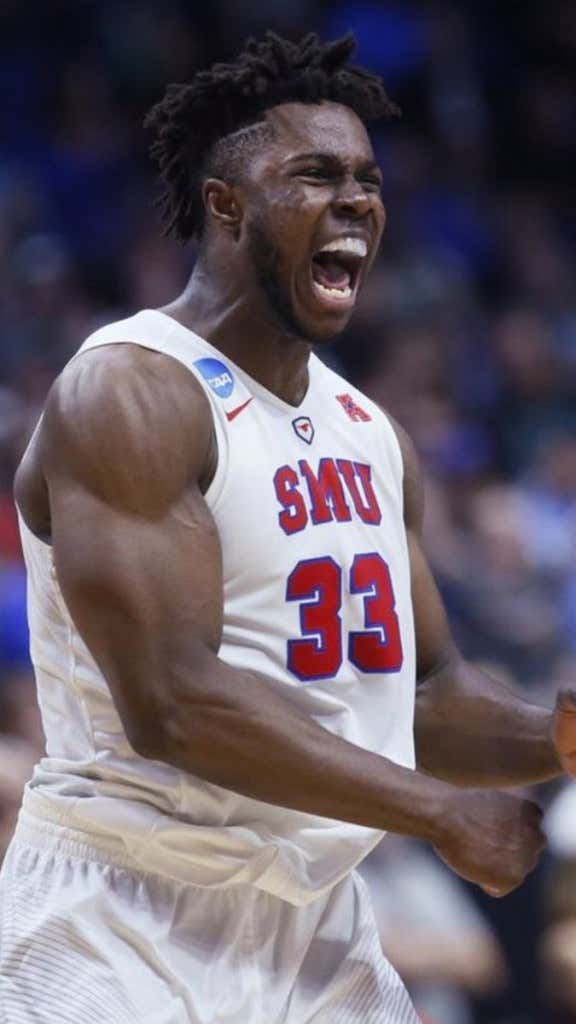 Not picking again until the 50s, these guys are most likely going to be featured on our beloved Maine Red Claws, if at all. The surprise here is Ainge ended up taking TWO guards after trading away from a guard in the first round. What was he thinking! But I digress. Personally, I cannot root for Kadeem Allen and his Arizona Wildcat ass. Can’t do it won’t do it. Sure maybe I’ll hate watch him during the summer league but my Sun Devil hands are tied. Word on the street is he is a plus perimeter defender which is nice, but fuck UofA so it’s w/e.

At 56 Ainge went with another guard and Jaylen Brown college teammate Jabari Bird. You know what this means right? That Bird is walking through that door! Ok that was a cheap joke, but that doesn’t mean it isn’t true. A 6’6 guard he’s sneaky old at 23, I suppose his size is attractive, but he didn’t really shoot the ball that well in his last year at Cal. Honestly I have no idea where a guy like this fits, so I don’t really expect him to make the roster. Summer league will give him some run, but that’s probably about it.

Now, perhaps the biggest knock on Ainge will probably be that he didn’t trade for Jimmy Butler, and I think people need to take a step back here. YES, Ainge probably could have given something better than what CHI accepted from MIN, but why should he? Remember, the Celtics situation is all about timing. It doesn’t make good business sense for them to eliminate their cap room just weeks before free agency starts. Why give up assets (whatever they are) for Butler when you can just pay Hayward in cash? The Celtics clearly prefer a chance at Hayward and more over Jimmy Butler and why does that have to be a bad thing? If you want to believe the PG13 rumors flying around this morning, Ainge still has a chance to land both PG13 AND Hayward. I know fans wanted to see something get done given how much we throw around the name Trader Danny, and I know it’s annoying as FUCK to see other teams make lesser trades for players that could help the Celtics, but try and remember there is clearly a plan in place. If we get to free agency and the Celtics strike out on Griffin or Hayward, and also don’t pull off a trade, I think that’s when we get really mad. Getting worked up at this point in time is just silly in my opinion.

Ainge’s drafting history was a hot topic heading into the draft, and from what you read by people who know things they mostly say he had a pretty good night. With everything, time will tell. For me, if Semi turns out to be legit to the point where he can be a second unit rotation player, that’s a huge fucking win. Fultz and Tatum will forever be linked together, and for the next 10+ years I’m sure Celtics fans will roll their eyes every time Fultz scores 20 points and the Sixers lose while Tatum has like 7 points on 3-5 shooting in 12 minutes in a Celtics win. That’s fine. Last night was about Step 1 in whatever plan the Celtics have moving forward, so while it would have been more fun to trade for Porzingis and shit, it’s hard to come away from last night as a Celtics fan and not feel good. Again if you always wanted Fultz your mind was already made up no matter what Ainge and the Celtics did, but after all the anticipation heading into the Draft, I’m coming away confident that we won’t look back at this Draft and say Ainge fucked everything up.

At least I hope, which is all we can really do.