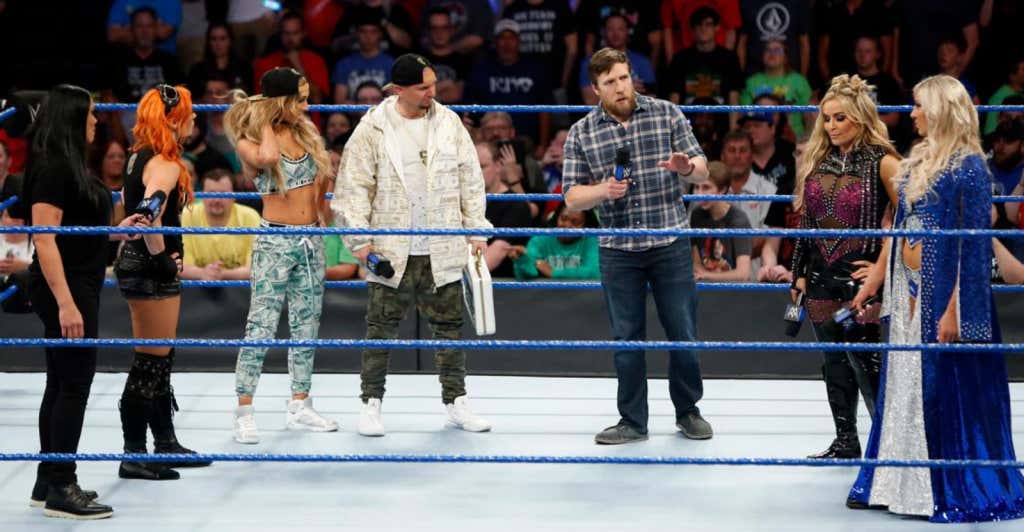 Hey y’all, it’s that time of week again! Time for the SmackDown Live not so live recap, presented by Barstool Sports. Just a reminder, I’ve got a wrestling podcast now with Jared Carrabis, and our episode where we recapped this, as well as RAW, and interviewed WWE United States Champion Kevin Owens went live today. You can listen to that on PodcastONE HERE or on iTunes HERE. For the people that prefer words…let’s go!

The NEW Miss Money in the Bank, Carmella, opened the show by defending her win on Sunday. She came off more confident than ever on the mic, and played the part perfectly. Oh, and she also pointed out that neither her or James Ellsworth did anything to break the rules at the pay per view. The match has no rules, and states the only way to win is to be the first woman holding the briefcase, which Carmella was. She simply exploited a loophole. Brilliant.

Our pal Kevin Owens kicked off a United States Championship Open Challenge, open to residents of Dayton, Ohio only. AJ Styles answered the challenge, KO denied him access because he’s not from Dayton, and Chad Gable, who claimed he moved to Dayton that morning answered the challenge. They had a REALLY fun match, and like I said on From The Top Rope today, Owens is the perfect guy to do this with. You can have a 20 minute block on TV every week from here on out for a promo, call out, and match. It’s also a nice parallel to Owens’ debut, answering John Cena’s US Title Open Challenge (and not actually having the match).

Daniel Bryan gathered all of the women on Smackdown and announced he’s stripping Carmella of the Money in the Bank briefcase, and he can do that because we’re in “uncharted territory”. They will be REDOing the match next week. This screams “We’re answering the ‘WWE is anti-women’ outrage because a MAN grabbed the briefcase”, and I hope it doesn’t result in Charlotte or Becky honorably winning it. Carmella deserves it, and I want to see her as Miss Money in the Bank. Tamina forgot her line at the end of the promo, so she just repeated Charlotte’s. I laughed very hard.

Shoutout to the guy who Venmo’d me $5 to get on Jinder Mahal’s “workout plan”. My Venmo is open for more donations to get what Jinder takes for his big natural muscles, it’s ThatRobbieFox.

Make sure you listen to From The Top Rope today! Kevin Owens reveals his favorite match of all time and it’s shocking!