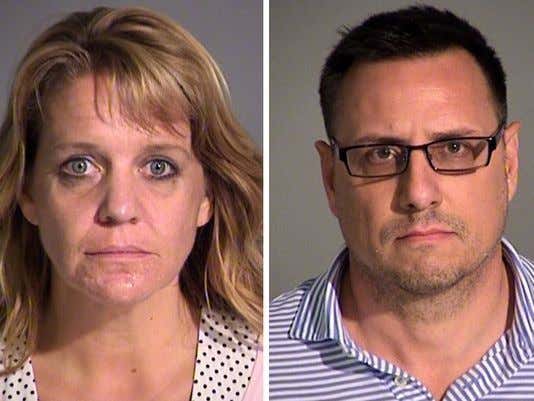 IndyStar- “The parents of a 7-month-old girl have been charged with neglect after police say they took the infant to a bar, where the mother allegedly breastfed her daughter while drinking beer.

Shari Treba, 42, and Michael Trosclair, 45, both face charges of neglect of a dependent and public intoxication after police found them intoxicated at a Downtown bar with their 7-month-old daughter, according to court documents detailing the incident. Officers were called to the Wild Beaver Saloon on East Maryland Street just before 1 a.m. Saturday, after callers reported an intoxicated woman with a baby at the bar, according to court documents detailing the incident. Officers found Treba standing outside a roped-off area of the bar next to a stroller, drinking beer. She told officers the baby was hers before taking another drink, documents say.

Witnesses told police she had been offering sex to people who would go inside and get her beer, according to court documents. They also said she had been seen drinking while breastfeeding the child and alleged she had left the baby unattended to go inside the bar and buy more beer. Treba, who police say never denied breastfeeding the child at the bar, tested a .193 percent blood alcohol content, according to court documents.

Soon after, Trosclair approached Treba and the officers, explaining that he was planning on calling an Uber to return to the hotel, documents say. Officers noted Trosclair appeared to be stumbling and smelled of alcohol. Trosclair grew agitated, and officers placed him in handcuffs to avoid a possible fight, according to the documents. Officers said Trosclair repeatedly asked to call a lawyer and couldn’t understand why the baby would be in danger with a mother who had consumed multiple drinks, documents say.”

There are a couple of things that you should know won’t be received well publicly. I don’t really have an issue with women breastfeeding in public, if it keeps a baby from wailing in a restaurant or wherever you are, I’m all for it. However, breastfeeding your baby at a bar while sucking down a few cold ones is not a good look. Was that the only option? Were they not aware we now possess devices that let you monitor something from a different location? They could’ve spent 15 bucks at Toys ‘R’ Us and grabbed a shitty baby monitor, and voila, crisis averted. But, I guess if you’re offering blowjobs for a Bud Light, Toys ‘R’ Us might be out of your price range.

I love how a cop approached her and asked if it was her baby, and she just flexed on his ass. Giving a simple yes and then slamming the rest of her beer in his face is such a power move. Albeit the wrong one. Luckily, her white knight almost resolved the situation. “How is the baby in any danger if the mother has had multiple drinks?” Airtight logic there, I’m shocked the cops didn’t bite on that. He would’ve been better off going the Randy Marsh route to settle the dispute.

Luckily, the baby shows no other signs of mistreatment, was taken to the hospital for tests, and is doing well. Here’s to hoping we don’t have to hear about these two shit-kicking scumbags again, but that might be wishful thinking. If you see a situation like this in the future, don’t be afraid to intervene. Just make sure you choose your words carefully, or you’ll become the villain very quickly.