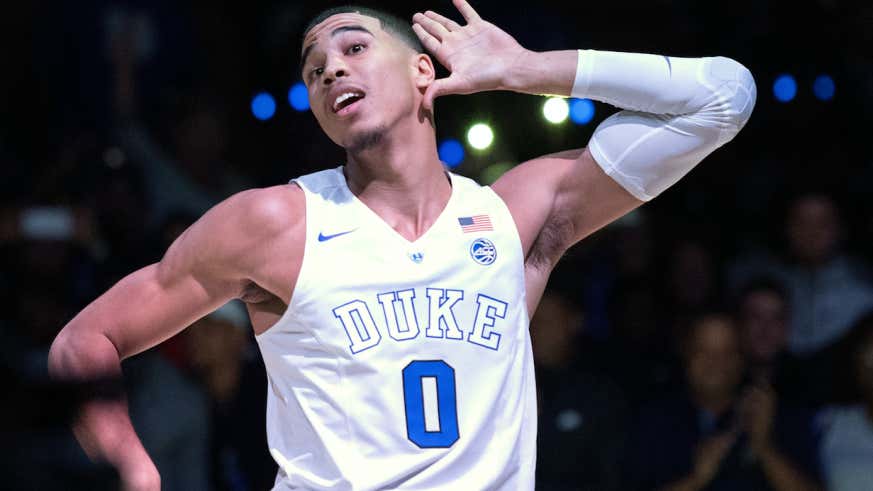 As we are just a handful of days away from the NBA Draft I’ll be breaking down the scouting reports for various players across the country who are expected to be taken in the top-10 of the 2017 NBA Draft. If there is someone specific you want on here, please let me know @barstoolreags. All videos are courtesy of Synergy and Krossover and the stats will come from Synergy, Krossover and KenPom.

Background: Yes, Duke wasn’t as successful as everyone in the world expected them to be last year. However, Jayson Tatum was. He put up a stat line of 16.8/7.3 while shooting over 50% from the floor. He even threw in over 2 assists a game and blocked a shot and grabbed a steal each time on the floor. My vote was for him as ACC Rookie of the Year, which went to Dennis Smith Jr., but Tatum did solidify himself as a top-10 (and should be top-5) pick in the NBA Draft. He has good size to play the wing in the NBA as he’s 6’8″ with a 6’11” wingspan and weighs 205 with plenty of room to get stronger. One benefit he does have is he’s still 19 and a whole year younger than Josh Jackson – the player he’s most often getting compared to in this draft. He also had the benefit of playing the small ball stretch forward position at Duke, which is where he’ll likely be the best fit at in today’s NBA.

Strengths: Tatum has been called a ‘ball-stopper’ because of his love to play in the ISO game. The positive here is he’s really damn good in ISO sets. He graded out in the 70th percentile nationally as he scored .896 points per possession out of 115 ISO sets this season. What makes him incredibly special in this set is his ability to keep the defender guessing based on his moves. He has really nice footwork including a jab step into a crossover that creates space and lets him shoot his midrange shot that he’s effective at. Over 36 percent of his jumpers came in that midrange area, which yes, draws comparison to Carmelo Anthony (that’s not a bad thing, I swear). Here’s a look at his shot chart this year from Krossover: 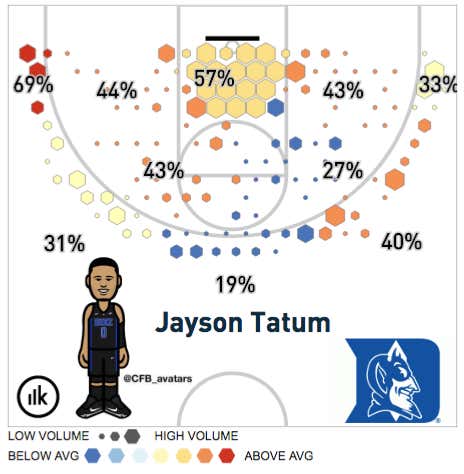 For those who like visuals, here’s another chart to coincide with the shot chart. This one shows how effective he is out of the ISO set and what his tendencies are in terms of which way he attacks and from where. 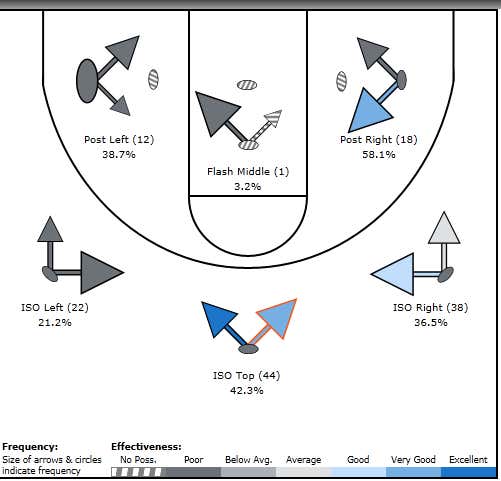 He’s most effective catching the ball at the top of the key and going left. This is where he likes to use his crossover to set up his opponent get to the wing and pull up. Again, it’s an old school style game, but he’s good at it. I know in today’s analytics the midrange is sort of the forgotten part, but when you can play the small ball four, drag a defender out of the lane and attack, there’s value there. While he can rely on that at times, he’s not afraid to take it to the rim and finish there either. You can see that here against Jonathan Isaac, one of the best defenders in this class. He uses a slight change of speed with a hesitation dribble to get a step on Isaac before finishing with a little scoop. Following that you can see him step into the midrange with the rhythm dribble that he likes. In fact, this video highlights most of what he enjoys doing with the ball in his hand. He jab steps, takes a rhythm dribble then goes into a crossover to create space and keep his rhythm. His shot form here is good as he elevates straight up and down and has a release point at the peak.

While the ISO game is fun to talk about, one of the reasons I like Tatum a lot is his ability to sit in the post when there’s a mismatch. That’s one of the biggest things lost in today’s small ball era, too many times stretch players like Tatum will lose the ability to post. As you can see in the chart above, Tatum was most effective when posting on the right block and turning to the left. In fact he graded in the 99th percentile in post ups with 1.303 points per possession. What’s perhaps even more impressive than that 1.303 number is the arsenal of moves he had in the post. Going back and watching post ups from the right block he showed a Dirk fadeaway, a spin back to the baseline, a finger roll and a face up game. It’s pretty impressive for a 19 year old to have that many moves when playing in the post is his secondary position. On top of that his footwork is there, meaning that will translate to the NBA and he just has to work on finishing over better defenders. Here are just two examples of the polished moves he has in the post.

Weaknesses: As the trend is in this draft, the first weakness that sticks out is his defensive ability. Yes, he has great size and length and does use that to contest shots, he’s still not strong enough to guard bigger fours. When he gets pinned in the post, guys will play bully ball with him, forcing him out of position and often giving up a layup. He needs to get stronger to hold his ground there, where he can use that 6’11” wingspan to contest before getting pushed below the rim. He gave up .973 points per possession on post ups and if he’s going to play that small ball four in the NBA, he’s going to get put in that situation more often. On top of that he’s not a great athlete. Yes he shows flashes of athleticism, but overall he’s the old school guy who is going to beat you with moves and not with speed. Same goes defensively as his lateral quickness or lack of it shows. He uses his length to help with close outs, but when he goes to get in a stance on a smaller guy, they often are able to get a step past him due to the quickness. He needs to be more consistent with his pick-and-roll game and shooting off the dribble while not in an ISO set. His first dribble is often a little high and erratic, which causes problems and when he’s coming off the screen to shoot, his form is rushed. He was an inconsistent shooter from deep because of that, but there are signs that it can improve. For the pick-and-roll, a combination of getting forced into that rushed shot and not being a great passer show.

Draft Stock/Projection: I like Tatum a lot because of his offensive sets. To me when footwork is already there and you just have to work on getting stronger or not rushing your form when contested, it’s easier to be good quicker. That’s Tatum. Throw in the fact he’s still young at 19 and there’s the reasons why he’s expected to go No. 3 to Boston (assuming they keep the pick). He’s projected to be a decent 3-point shooter at over 36% from the NBA line, which means if he can add muscle to that 205 frame and be a little better athlete, he’s going to hold value as one of the 3 best players in this draft. He’s not a bad rebounder as he uses his legs for positioning and ability to hold off other players, which combined with his offense will make him a rotational player from day one.