ROB AND REX RYAN GETTING INTO BAR ROOM BRAWLS pic.twitter.com/5FwXxuPODn

“He alleges that he saw the Ryans in Margaritaville on Broadway, went up to their table, and that after being there for more than an hour, Rex Ryan reached across and grabbed at his neck,” Aaron wrote via email. “Havel alleges it was unprovoked.”

I wasn’t in Nashville this week, enjoying overpriced drinks and mass produced appetizers in a tropical escape-themed chain restaurant. So I can’t claim to have seen what happened between Matthew J. Havel and the Ryan brothers. But what I can claim is that I’m a student of human nature. And a guy who’s been in way more bars than any man should be. Which is way more useful here than what my eyes would have told me. And I can say categorically, without a subatomic particle of doubt, that Havel is completely full of shit in this one.

As the world is well aware, I am no fan of the Ryans. Rex is a pompous, ego-maniacal gasbag in love with the sound of his own voice. Rob is an overly emotional dirigible and every defense he’s coached has been better without him than with him. Their own senses of self-worth are way out of whack with what they’ve actually accomplished. And if they weighed 190 lbs each and didn’t make wild facial expression on the sidelines, the country wouldn’t know their names. But does any of that describe the kind of guys who start barfights? Not on your life. Not to mention the Video clearly shows Rob with his hand on this squeef’s throat. Which by the way is the best defense he’s ever demonstrated.

Barfighters are like serial killers: It’s always the quiet ones. No one was ever interviewed on the news while police were carrying body bags out of a neighbor’s house and said “He’s a big, pushy loudmouth who was always up in everyone else’s business.” It’s always a loner. So there’s no way a Ryan would just haul off and choke a bitch he’s been hanging with for an hour “unprovoked.” Simply no way.

My theory has always been that 95 of all punches thrown in bars are landed on the same five percent of the population. Everyone knows That Guy. I had one in my neighborhood. At least once a month you’d see him with a shiner, ask what happened and he’d say “I was at the Good Company Lounge, minding my own business and a guy hit me for no reason.” But it happened to him constantly. And to practically no one else knew. I promise you that the bars around Pueblo, CO are lousy with guys who had enough of Matthew J. Havel’s nonsense and slapped him around.

Not to mention we’ve got this Stoolie, whose boyfriend took the original video: 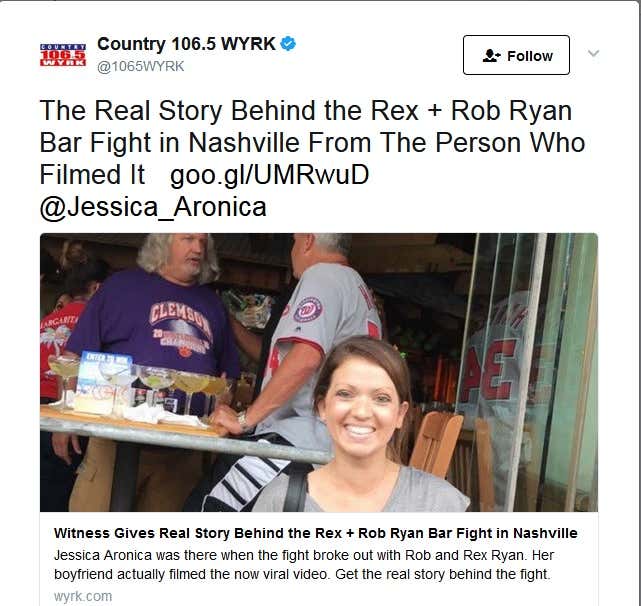 Her version of the event is slightly different than Matthew’s lawyer’s. “I was just about to go over and tap Rex Ryan on the shoulder,” she told WYRK “When all of the sudden this kid like came up to them and threw a drink in Rex’s face!”

Boom. Done. Judge Thornton’s ruling is that Rex and Rob Ryan are the kinds of assholes who’ll talk crap about their opponents and will never win in the NFL. But not the kind who start bar fights for no reason. Case dismissed.