“He broke me … And I apologized because that was the right thing to do and I meant it,” Kathy Griffin says https://t.co/T5uqozQu3e pic.twitter.com/hmgqqDQy0Z

We are what? 48 hours since she put out the Trump severed head photo, and she’s already playing the victim card? That has to shatter the old mark. It used to take a week or more for a humiliated celebrity to start asking the public for sympathy. The gameplan was you issue the apology, lay low for a few days, ride out the storm, then cry to Barbara Walters about how difficult your life has been. That took time. But to go from “Edgy Comedian Who Isn’t Afraid to Shock the World with Her Art” to “Victim of Bullying” in less than two days is a hell of a turnaround.

I mean, how many boxes did Griffin and Lisa Bloom check here? It’s almost too many to count. Claiming she’s the victim of bullying? Check. Fake tears? Check. A non-apology apology? Yup. Blaming Trump for giving her no choice but to pretend cut off his head by being the most woman-hating and tyrannical president in history”? All set. Her shows are only being canceled because of a conspiracy by the Trumps? Yup. Claiming “older white men” have been trying keep her down her whole life (since she’s a member of the that oppressed community of wealthy, famous, redheaded Anglos)? Affirmative.  “He broke me. He broke me. He [sob] broke me?” Roger that.

But the claim that finally gave her Victimhood Bingo was when she tearfully said how unfair it was that they made it all about Barron and she would never try to hurt a child. Which takes an unbelievable talent for self-pity, given that just six months ago she said this to Vulture: 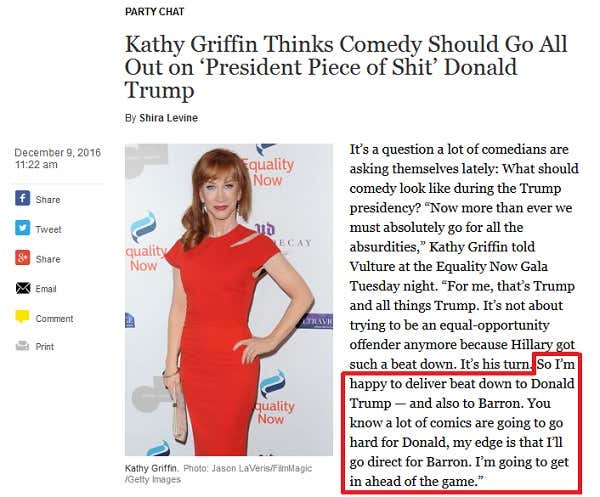 It’s takes a huge gift of ego-maniacal vanity to openly say you’re going to beat down – your words, not mine – an 11-year-old kid, pretend to decapitate his dad and then complain about “bullying” once his family Tweets at you. Especially when you’ve always positioned yourself as some iron willed, outspoken feminist icon. Which makes Kathy’s claims of victimhood all the more impressive. I don’t know this Lisa Bloom, but apparently she’s Gloria Allred’s daughter and she learned from the master. The fact she is so utterly shameless and devoid of even a trace of legal ethics that she can look into the cameras and say Kathy Griffin is the victim in this means we have a new celebrity attorney superstar in our midst.