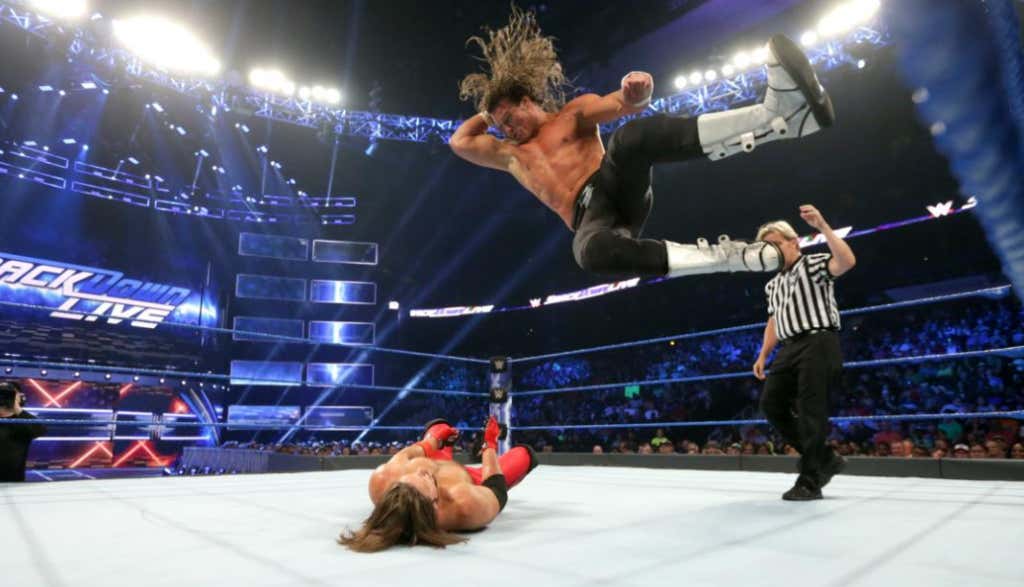 Welcome to the weekly Jinder Mahal is still the WWE Champion Recap! Let’s do it!

The Face of America Kevin Owens began the show with a highlight reel, paralleling The Miz opening up the show with Miz TV the day before. He’s the best in the company on the stick, so when Shinsuke Nakamura who doesn’t speak much English picked up the mic, things sort of went downhill. Over the past few years it seems Vince McMahon believes everyone needs to talk to get over, but that is simply not the case. Shinsuke doesn’t ever need to grab the mic, and I’d prefer he didn’t. Why not just let some people be silent ass kickers?

P.S. Audio pyro was added to Shinsuke’s entrance. Don’t fix what ain’t broken. Take that out.

A tag team match followed when Sami Zayn made the save on Shinsuke Nakamura, and was very similar to the one last week (this is a good thing, last week’s tag match was great). Nakamura pinned Kevin Owens clean for the second week in a row, and if he’s the next big thing like he’s apparently slated to be, okay, but why not alternate just a little bit and have him pin Baron Corbin this week? It’s looking like Shinsuke could be the favorite to win Money in the Bank though, so we have an entrance with a briefcase to look forward to.

The New Day returned! Finally, after weeks and weeks, they’re back, and this could be a huge saving grace for SmackDown Live. They’ll be on the show every week, they’ll have 10-20 minutes dedicated to their segments/matches, and could start main eventing pay per views for the tag team championships if fans start turning on Jinder in the “we’re not going to react more way”.

Shane McMahon attempted to have Charlotte Flair, Becky Lynch, Tamina Snuka, Carmella, and Natalya compete in a five way match to determine the #1 contender to Naomi’s SmackDown Women’s Championship, but it turned into complete and utter chaos, so they’re gonna settle it in a regular exhibition match to make sure that doesn’t happen again. Kidding! The five of these women will now face each other at Money in the Bank in the first every Women’s Money In The Bank ladder match. I’d like to see Naomi in the match too, somehow, and I know that doesn’t make sense because she’s the champion, but it could work. Play it up as her thinking the concept isn’t fair unless she can win the briefcase to make sure she doesn’t get screwed. She’s one of the more athletic women we’ve ever seen in a WWE ring and these matches typically have 6 participants.

Randy Orton and Jinder Mahal had a segment. It was the same segment they’ve had for the past few months. Jinder has go away heat, not heel heat.

AJ Styles had his big homecoming to Atlanta and the red tights to match. It was cool to see him main event in his hometown as a face, and see the fans just be so receptive (as they always are). It was not as cool to see him lose to Dolph Ziggler in said hometown, but hey, it was a really great match to close the show, which was also a pretty clear improvement from last week. I think I’m gonna start a weekend blog series soon to combat complaining about the WWE product where I’ll highlight other promotions from around the world, give you guys a little introduction and some must watch matches from said promotions, and generally just show that there’s alternatives. It’s not like the 90s when we used to trade VHS tapes to see Japanese or Mexican wrestling, these promotions are now very easily accessible due to the internet. So look forward to that in the future.

See ya next week, (for the people who only read SmackDown recap blogs, see you tomorrow for everyone else)!