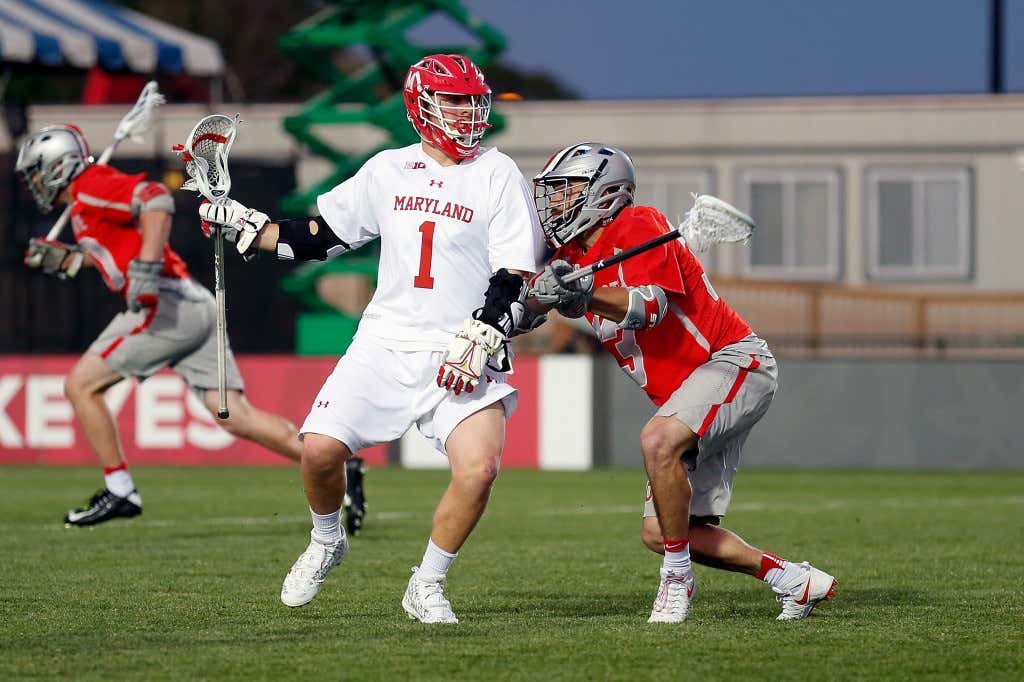 Where: Gillette Stadium for those of you who are lucky enough to be in attendance. ESPN2 for the rest of us.

Why: Because Stone Cold said so. Also because Ohio State makes their 1st national championship game appearance after completing their comeback against Towson on Saturday in the semis. Thanks to senior attackman Eric Fannell putting the team on his back.

The Buckeyes went into halftime down 7-3. It looked like Towson’s 6v6 defense was just too much for them to handle. But they came out to score 8 in the 2nd half and only gave up 3. Just two completely different games from the 1st half to the 2nd. And now Ohio State has a rubber match set up against B1G rival Maryland.

Maryland was playing in their 4th straight semifinal game and advanced to their 3rd straight National Championship game after Connor Kelly was unnecessarily ruthless to Denver goalie Alex Ready and the rest of the net.

A casual bomb from 15. Followed up by one of the prettier BarDown’s you’ll ever see.

Pure filth. Waits until he’s out of his roll to switch to his right hand. Protects the stick. And then it’s bombs away. Alex Ready never had a chance. We already talked about the wild final 2 minutes of that game and you can read about it here. But after losing to Denver in the championship in 2015 and then losing to UNC in the championship in 2016, Maryland final has a chance to win their first title since 1975. Makes sense that a Philly kid is leading the Terps when you see the start year of the championship drought.

This will be the 3rd time Maryland and Ohio State play each other this year. The first game was in the regular season when Ohio State knocked off the Terps 11-10 in overtime.

Johnny Pearson scored the game winner but it was Eric Fannell leading the way that game with 5 goals on the night. The second game was the B1G championship game when Maryland took the 1-seed in the tournament from Ohio State after winning 10-9.

Rambo turned it on late in the game and finished the night with 1 and 2. But it was Connor Kelly leading the Terps to the championship with a 5-goal night. And as the kids say, there was no love lost after the end of this one and a true, blood-thirsty rivalry was born.

2 games. Both decided by 1-goal. And I wouldn’t expect anything different today.

Now depending on what the weather does today will determine the type of game we’ll see. No matter what, I’m taking Ohio State +1.5 but Maryland coming out on top. But the weather will determine if we get something like a 7-6 game or if both teams are able to hit double digits. If it’s shitty weather than both teams will gladly sit on the ball on offense and be a little more hesitant in their shot selections. The way that the sticks and mesh are made these days, rain doesn’t have as much of an impact on the game as it used to. At least in terms of passing and shooting. But we already saw how slick the turf is at Gillette Stadium. So rain will only make it worse for shooters to get their feet under them before they grip and rip. So I probably wouldn’t touch the O/U on this thing just because it’s too hard to judge the difference the rain will make. But yeah, this one is coming down to a 1-goal game and I’ve got Matt Rambo and the Terps coming out on top.

It’s just a destiny thing at this point. You have a senior class at Maryland who have 4 quarters left in their career. They’ve been to Championship Weekend all 4 years of their careers. They were 1 game away from being National Champions the past 2 years. At some point, something has to give and you have to win one. I know that wasn’t the case for the Bills in the early 90s. But I just see today as a game between a team who has been there plenty of times before vs a team who might let the size of the stage get to them a little bit.

Terps by 1. Heacock with the game winner. Preferably another hockey goal.

P.S. – Two B1G schools playing for the National Championship in a year that zero ACC schools made it to the Final Four. Gotta love it.