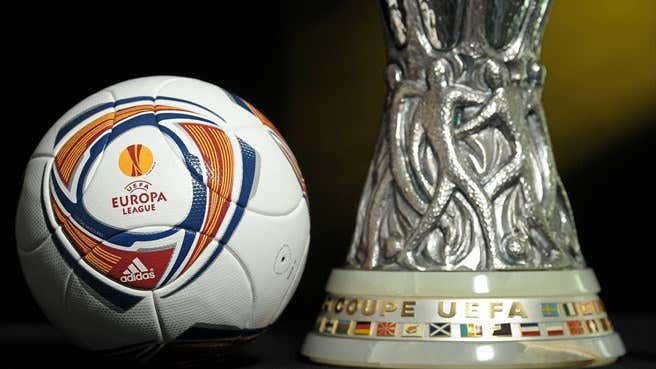 Well here it is. The moment you have all been waiting this entire season for… the EUROPA LEAGUE FINAL! And what better way to get PUMPED then the official anthem!

Let’s be honest, even the anthem screams B-league.

Whereas the Champions League anthem’s soaring instrumentals send shivers down your spine, blood rushing to your sports boner and warm fuzzy tingles within your brain knowing that the greatest soccer on god’s green earth is dead ahead… the Europa League anthem sounds like an extra-long lead-in to a local television news special investigative report on neighborhood gas stations caught programming their pumps to automatically overcharge drivers by $0.04 per gallon.

Know who disagrees vehemently with the suggestion that Europa League is bunk? You guessed it! United’s Dear Beloved Leader Jozay Mourinho, who sees it as more or less the world’s most premier competition.

But does he? Does he really?

Well no matter, Jozay is the master of the moving goalposts, and he has done a remarkable job of convincing a lot of people that he has done a remarkable job so far at United– despite finishing the season in 6th place after spending more than $200 million on transfers last summer. (Note: this doesn’t include signing on a free transfer the player/god with the single highest salary in the world, making the club’s annual wages the 2nd biggest in the league.)

But enough taking the piss from our boy Jozay. Today is all about United versus Ajax – not for the most prestigious marbles, but perhaps the most important ones. 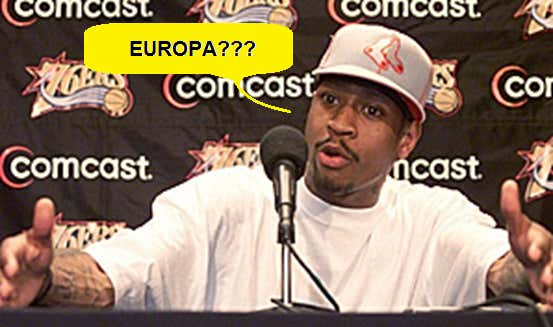 Now normally I agree with Mr. Iverson’s assessment and thus tend not to focus much on Europa League, but there is no two ways about it: this one is important af. Most people will already know this but I’ll give it a quick and dirty once over for those who don’t: if United lose today they will miss out on next season’s Champions League. That would be calamitous. In fact, losing out on almost $30 million per their contract with Adidas for not playing UCL might not even make the top 10 reasons why it would be awful (that, after all, is nothing taking on a lil mo’ debt couldn’t paper over). It could hamper their ability to attract big name players this summer

and, most viscerally, would be extremely embarrassing for a club that prides itself on being one of the biggest in the world (or the biggest based on some measures… unrelated to winning and losing, obviously), and a coach whose stature (and salary) are based on his ability to win things like the Champions League… and according to most experts you have to qualify for Champions League in order to win Champions League.

There has been a lot of discussion on the twitter streets this week about whether today’s game is the deciding factor on whether United’s season has been a “success” or “failure”.

Mourinho’s defenders will say a win today would mean two trophies and Champions League next season. Looked at in that light it doesn’t sound too terribly bad.

I don’t personally buy it though. League Cup isn’t a trophy, it’s a trinket***, and finishing 6th is just plain embarrassing given the amount of money the club is spending, and a parachute ticket into the UCL – while not nothing, granted – doesn’t change that. But I acknowledge this just comes down to a difference of opinion. (***And yes, it also means I am essentially disowning the only trophy – ‘08 League Cup – that Spurs have won in recent memory.)

The one thing we can all agree on is this: if United does not beat Ajax today then this season will have been a complete, utter, total, thorough, unabashed traveshamockery. 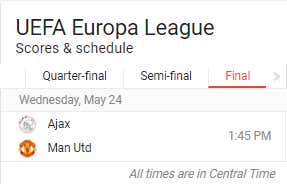 Full disclosure: I have a lot more confidence in my Champions League final pick than I do for this one, which I have gone back and forth on about a billion times already.

I don’t buy United being such a heavy favorite, especially with Eric Bailly suspended – Phil “Poor Man’s Gary Cahill” Jones and Daley “Good At Everything Great At Nothing” Blind holding down the center of defense is not scaring anyone – and Mourinho’s steadfast commitment to playing Sergio Romero over David De Gea in net.

Ajax are young. Ajax are talented. Ajax are cohesive. And they are going to give United trouble at the back. Ander Herrera may not get a lot of attention in the pregame buildup but he needs to come up YOUGE (not for the first time this season) in clogging up the middle of the field to help take pressure off of guys like Matteo Darmian.

There are two things that Ajax are not though: one is good on the road, and the other is stingy on defense. Jozay (for all his faults and foibles) has an incredible record in big games when he has time to tailor a strategy to a given opponent and impart it upon his players. Despite all the goose eggs United has put up this season they still have a lot of dynamic talent going forward in Rashford, Martial, Mkhitaryan, Lingard and Pogba. Their speed on the wings plus the pressure of the moment could add up to mistakes by the Dutchies, which it will simply be up to United to take advantage of (for once).

Like I said, I’ve been all over the place on this prediction, and United’s biggest game of the season ending in a draw (bonus points for scoreless) after 90 minutes makes almost too much damn sense not to go with it… but in the end – perhaps because I still appreciate the Red Devil’s unexpected win over Chelsea to make it a title race for a moment, or perhaps because a victory today would bring much-needed joy to some devastated Mancunians – I’m giving Jozay the benefit of the doubt.

Friendly reminder: we’ve still got FA Cup final, Champions League final and USMNT coming up in the next couple weeks… so for those of you looking forward to a break from me – sorry.