Joe Seider with the Snipe Heard ‘Round The World during Towson’s 10-7 win over Syracuse yesterday. Doesn’t get any sexier than that. Step down from 14. Sidearm release. Stick side high. Stinging the corner. Almost makes you want to believe in unicorns or some shit.

And just like that, boys and girls, there were four. The NCAA DI Men’s Lacrosse season started on February 2nd with Furman vs Vermont. And now there are just 3 more games left of the season coming up this weekend in Foxborough. Semifinals on Saturday and then one final game on Monday. The four teams left after this past weekend are #1 seed Maryland, #3 seed Ohio State, #5 seed Denver and unseeded Towson. Let’s see how they got there.

Now I’ll be honest. This past weekend was a bit of a let down. On paper, it looked like we were in store for one of the best quarterfinal weekends in college lacrosse history. Thought for sure that all 4 games were going to come down to the wire and we’d get a few overtimes thrown into the mix. Thought it was going to be 4 straight games of madness. What we saw instead were 2 massive blowouts and 2 more games that were essentially won in the 1st half. But that’s just the way she goes, boys. Sometimes she goes and sometimes she doesn’t. Anyway, on to the highlights.

It took me until May 20 to finally buy in to the 2017 Ohio State Buckeyes. Even after they beat Maryland in the regular season and only lost to them by 1 in the B1G championship game. Even after they smoked Denver back in March. For some reason, I was just always waiting for their guard to drop and do get bounced in the tournament. I picked Loyola over the Buckeyes in the first round. I picked Duke over the Buckeyes in the quarterfinals. And you know what? I’m getting exactly what I deserve right now for betting against a team who have team issued dyed mohawks and bleached hair in general.

That’s a team you don’t fuck with. That is a team that has gone all in on themselves. I don’t know why I didn’t the hair seriously before but that’s the kind of shit that bonds a team together and makes them a stronger unit. I don’t care how your X’s and O’s stack up against each other. Team bleached hair is something you can’t gameplan for. Anyway, the biggest game changers for Ohio State on Saturday were goalie Tom Carey

14 saves on the day for Carey. Had a few of them right on the door step like that one right there. Jack Bruckner and Justin Guterding had 13 total shots for Duke on the day. They still combined for 5 goals but obviously the 8 saves against those guys was the difference in this one.

And then there was Eric Fannell who had 7 points on the day with 5 goals and 2 assists.

The two Canadian box boys are just so fucking dominant for Ohio State. Fannell and LeClaire give the Buckeyes and edge that most teams in the country just don’t have. Fannell is 6’1″ 220, LeClaire is 6’2″ 205. As soon as someone like Fannell initiates contact on his dodge with a defenseman, he’s already won. Ando now Ohio State will be playing Towson in the first game on Saturday at noon.

I know I already used this GIF up top but that shot was so pretty that I had to show it again. Either way, what a run this Towson team has gone on. I said it from the beginning. The matchup against Towson was worst case scenario for Syracuse. If this was Cuse vs Penn State yesterday than the Syracuse senior class would have avoided being the first class in Cuse history to miss out on the Final Four all 4 years. Instead, they’re missing Championship Weekend again and Towson is going for the first time since 2001.

The biggest story from yesterday’s game was Towson’s defense 6v6 against Syracuse’s offense. It seemed like the only time Syracuse ever had an opportunity to score, it was either in transition or on man-up. But 6v6, they couldn’t get anything going. It didn’t help that a kid like Jordan Evans had one of the worst days imaginable. It’s tough to wear #22 for Syracuse. There is a TON of weight behind that number. But to end your career at Syracuse with 1 assist and a ton of key turnovers.

But yeah. Defensively, Towson was lights out all day. And then offensively, their shooters were fucking bombs away in the 1st quarter. They got off to a 6-0 lead after 1 and were able to coast from there. Seider had 4 goals on the day. Ryan Drenner had 4 assists on the day. I think Evan Molloy might want a few of those goals back but it’s hard to stop everything when there’s a shooting gallery going on in front of you.

Now we’re on to the full blown beatdown portion of the weekend. What we saw from Trevor Baptiste on Saturday against Notre Dame was pure domination. He lost the first faceoff of the day and then went on to win the next 21. Baptiste–the first FOGO to be named a Tewaaraton finalist–was 21 for 22 on the day and added on a goal for good measure.

Listen. I think I know the game of lacrosse pretty well but I know I’m not an expert. With that being said, I feel confident in saying it’s pretty damn hard to win a lacrosse game when your team never has the ball. Denver immediately got the ball back after all 16 of their goals. Make-it-take-it lacrosse at it’s finest. Matt Rambo willed Maryland back to Championship Weekend yesterday. Connor Fields had a ridiculous year with over 100 points on the season. But nobody in lacrosse changes the game quite like Baptiste does. The kid is a stud and he single handedly stops any team from going on a run against Denver. Because even if your team scores a goal against their D, you’re not getting the ball back after.

By the way, it should have been 17-4 after this shot from Connor Cannizzaro wasn’t called a goal right before halftime. 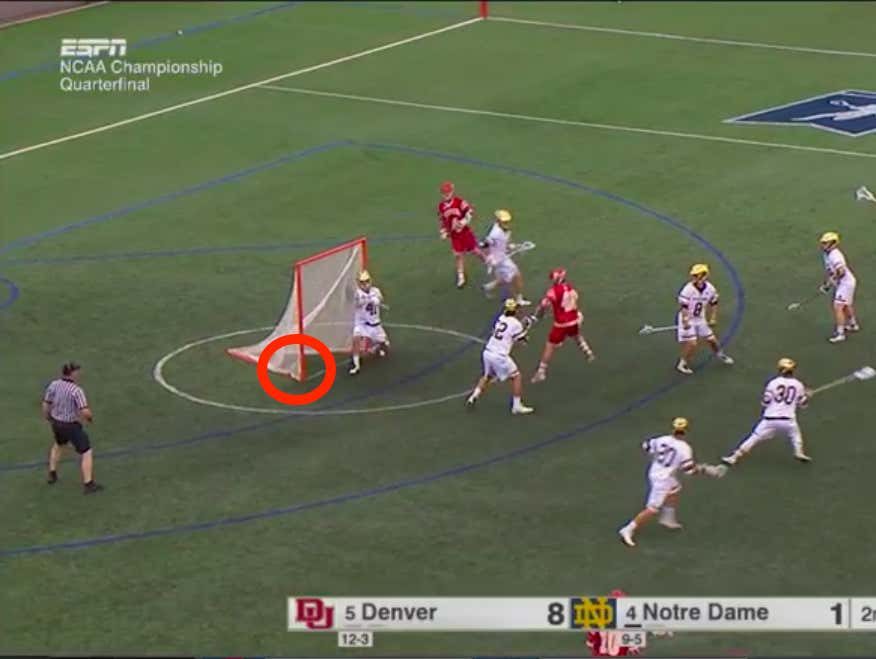 Ball is clearly in the net. Lacrosse might want to invest in some sort of video replay system.

Denver will play against Maryland in the 2nd game on Saturday. Maryland is making their 4th straight Final Four appearance after losing in the semis in 2014, to Denver in the final in 2015 and to UNC in the final in 2016. Maryland gets back to championship weekend after they WORKED Albany yesterday.

I think I accidentally mushed the Danes…

Again, this is Maryland’s 4th straight Final Four appearance. This is a senior class that has never not been playing on Memorial Day Weekend. What we saw yesterday is that senior class will their way to Championship Weekend yet again. As much as I loved Albany all season long, this was simply a game that Matt Rambo was not going to let the Terps lose. They jumped out to an early lead and they never took their foot off the gas until about 9 minutes left in the 4th quarter when the subs went in. Rambo had 4 and 4. Connor Kelly had 5 goals. Dylan Maltz and Tim Rotanz both had 2 and 1. It was a beatdown of epic proportions.

Everybody in the lacrosse world had this game circled as a possible Game of the Tournament. I think I was leading that charge but it was billed to be one of the better games in recent history. Matt Rambo, Tewaaraton finalist, on his quest to cap off his career with a National Championship. Versus Connor Fields, Tewaaraton finalist, the nation’s leading scoring, and the always loose Albany Danes looking for their first trip to Championship Weekend. It had a David v Goliath feel to it. But this shit isn’t Greek mythology. This isn’t story time. This is reality. And in reality, Goliath beats the balls off of David.

This week’s picks were vs Maryland. That clearly didn’t work out. over Ohio State in a pick ‘em. Ohio State moved on. Towson +1.5 against Syracuse and they pulled off the upset. And then Denver -1 vs Notre Dame. They cooked the Irish.

Still haven’t had a losing week yet this year but I’m willing to admit I let my heart get in front of my brain with that Albany pick. Only one more weekend to make some cash this college lacrosse season. Let’s be better on Memorial Day.