MAJOR ups to Jerry, Kenny and Rick, Marco Paddy and the entire scouting department for making this happen.

Though this signing went against the grain of perceived organizational philosophies, it TOTALLY negates the narrative that the organization is too risk adverse and won’t go all-in for an unknown commodity, and which is incredibly refreshing.  Shooters shoot, as the kids say these days.  That doesn’t mean this signing doesn’t come without (a lot) of risk, but this is was something that was a must happen, unless the Cardinals were willing to pay something completely outrageous and obscene for Robert’s services.  We’ll talk about all of this towards the end, but first let’s look at Robert as a player.

This is about to get really baseball-y, so listen up.

Here’s a quick reference of how MLB Pipeline compares Robert to Yoan Moncada on a 20/80 scouting breakdown: 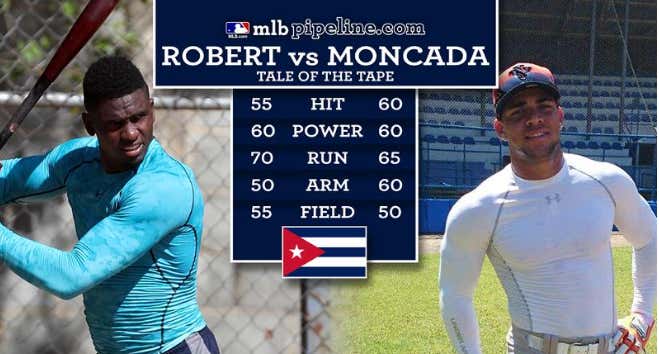 I can fuck with that all goddamn day.  Giggity!!!

Here’s a few notes on what I see when I watch his tape. 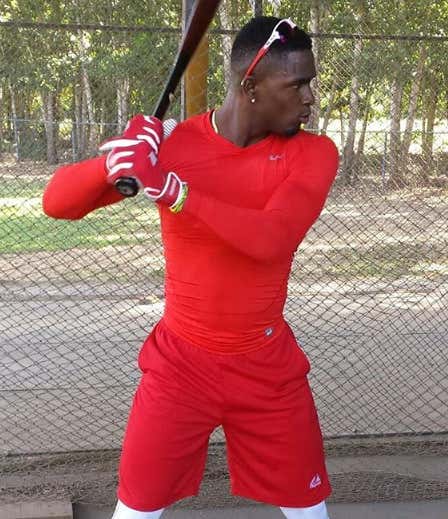 There are few players in baseball that I look at and say, “wow, this dude screams 5 tool potential” just by examining his build.  One would be Addison Russell.  Another would be Yasiel Puig.  Another would be Ronaldo Torreyes.  Taking one look at Robert makes me think I’m looking at 19 year old who just got done putting up a 1000 yard, 12 touchdown season at ‘Bama, not a kid who the White Sox just hedged a lot of their future on.

He’s lean, athletic, and his fast twitch actions are apparently exceptional as well.  More on the latter in a second.  By watching videos of his workouts over the last few months, it’s evident that if he wants, he can add 20-25 pounds without sacrificing any of his fast twitch actions at all.  His frame should allow for at least that much weight to be added, if the organization wants him to.  That said, he’s not too far off from being big league ready when speaking in terms of physical maturation as we speak.

A 6.13 60 yard dash would be the top 1% of MLB.  Might even be the best 60 in the game.  As a reference – Yoan Moncada, who has serious wheels himself, was consistently clocked around 6.5 in the 60 during his showcase circuit.

This is more or less the equivalent of a 4.3ish 40 at the NFL combine.  Absolute insanity.   This speaks volumes to how athletic he truly is, and when it’s coupled with a frame that can/will eventually sit at 6’2” 200 pounds or so, we’re talking 30/30 potential.  I don’t have to explain the rarity of this kind of skill set.

Gonna try to keep this as short as possible, but here goes:

I kinda dislike watching a player take BP then assessing his swing based off that, because a lot of times a player will have a completely different swing in BP than a game.  That said, the first thing I look for 100% of the time is are the actions in his feet.  I want to see a player on the balls of his feet, balanced, and loose.  If a player takes a swing, is falling all over the place, spinning on his front heel, etc. in BP while swinging 50%, how is he supposed to stay balanced while swinging at 100% against live pitching?

I would say that in the video above, Robert’s balance seems adequate at worst, solid at best.  His coordination will continue to improve as he fills out.

After looking at a hitters feet, I work my way up through knees, hips and core.  As a hitter starts to generate momentum towards any given pitch, I want to see the back knee start to work towards the pitch first by generating leverage with the inside heel of the back leg while staying as linear as possible.  Rotational swings = Todd Frazier and Todd Frazier = bad hitter.  Eventually torque will generate in a hitter’s hips and core and it’ll act like a catapult that forces the hands to act in form of a swing.

The video above doesn’t show too much back heel/knee drive.  I’d imagine that’d be different if there was decent game footage of him, but there really isn’t.  Good examples of players who have excellent back leg drive are Hanley Ramirez or Mike Trout (obviously).

His bat plane is level and compact; pretty by the book.  I’d say it’s pretty fundamentally sound, yet at this point, I’d say he possesses a swing that’ll generate more gap to gap power than loft, which isn’t necessarily a bad thing, because with how freakishly strong he is and how excellent his bat speed is, he very well could have a 15/15 floor which, obviously, is a great floor.  That said, the saying goes “prospects will break your heart.”  With all the tools in the world, no one is a sure thing.

What the Robert signing means for the next two years on the international market:

The White Sox will pay a tax that is 100% of Robert’s signing bonus, which is said to be about $25MM.  That’s ~$50MM investment in the player, and the Sox will be restricted to signing international talent for no more than $300K the next two years.

That said, with the new hard cap – there probably will be a lot more quality players available for $300K than in the previous international rules.  The playing field has been evened out by a ton in the new CBA, as teams will all have, give or take a million bucks or two, the same amount of money to play with.  The new CBA kicks in June 15th, so Robert had to sign before then or he would have screwed himself out of 10s of millions of dollars.  If the Sox hadn’t signed him, they would have been out on all the premier talent on the international market, as there was no rumored pre-arranged deals with any Latin American talent whatsoever.  That is the reason that this signing was a must, must happen.  It was their plan A, B, C and D.

Now many of the talking heads in the media have said that Robert would be the 1-1 pick in the 2017 draft had he been eligible and an immediate top 25 prospect in the game.  That’s a lot to put on a 19 year old kid who hasn’t played organized baseball in a year or so.  But, as referenced above, his tools are loud and he could be a great, great player in due time.

On the MLB Pipeline rankings, the White Sox will now have 7 players in the top 100:

Then you have to figure in the 2017 draft with the 11th pick, a top 5ish pick in 2018, and trades for Quintana, Robertson and pretty much the entire bullpen.  There is a lot of organizational depth being built right now.   Assuming none of these players graduate from prospect rankings before the deadline and that Q is dealt, the White Sox will own 10-12% of the entire top 100.  Then come 2019 when these players are all big league ready or close, they’ll have a minuscule payroll and be able to attack free agency like crazy.  It’s going to be a really fun few years. 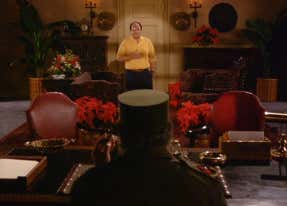