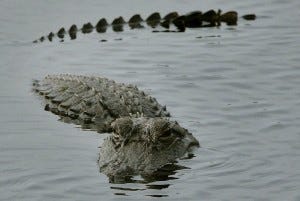 Zimbabwe – A pastor has been killed after he was eaten by three crocodiles while trying to walk on water, it has been claimed.

Jonathan Mthethwa was trying to show his congregation how Jesus walked on water by crossing what is locally known as Crocodile River on foot, according to local reports

However, he did not make it across the river in Zimbabwe.

The pastor, from the Saint of the Last Days church, managed to get around 90ft into the river, the paper reported, before trying to climb onto the surface of the river.

‘He promised he would demonstrate his faith to us today, but he unfortunately ended up drowning and getting eaten by three large crocodiles in front of us.

‘We still don’t understand how this happened because he fasted and prayed the whole week. They finished him in a couple of minutes.

‘All that was left of him when they finished eating him is a pair of sandals and his underwear floating above the water.’

As a slightly below average Catholic myself, I can honestly say that I admire Pastor Mthethwa’s hustle here. That is a level of dedication that goes way above your typical read the scripture/give the homily/pass the collection plate Sunday service you see out of a lot of church leaders. So stick tap to him for his grit.

On the other hand, I’m not really sure this kind of demonstration is really helpful. I respect Deacon Nkosi seeing it as Mthethwa teaching about faith. But it’s pretty much the exact opposite lesson you’re trying to get across. You’re not doing the Almighty any favors when you tell you’re flock they can fast and pray and He’ll protect them only to get ripped to shreds in the jaws of a bunch of murder dinosaurs right in front of them. That’s not quite spreading the Gospel. And while I wouldn’t deign to ever speak for my Lord and Savior, I don’t think Jesus every recommended everybody else try to walk on water. He did it to prove how special he was. And it pretty much defeats the purpose if every swinging dick minister from Saint of the Last Days church can pull off the trick. Not to mention if you’re going to try the stunt, you might want to start with a puddle, a small stream or a kiddie pool. And not a muddy suicide creek that literally has “Crocodile” in its name.

The deacon might not understand how his buddy got reduced to a pair of sandals and some very soiled underwear in a matter of seconds, but I think the rest of us pretty much know how it happened. As does the congregation. The Scriptures say “God helps those who help themselves.” Diving into Crocodile River and walking clean to the other side was never a part of the bargain. In Bond movies, yes. The Bible, no. Thus endth the lesson.