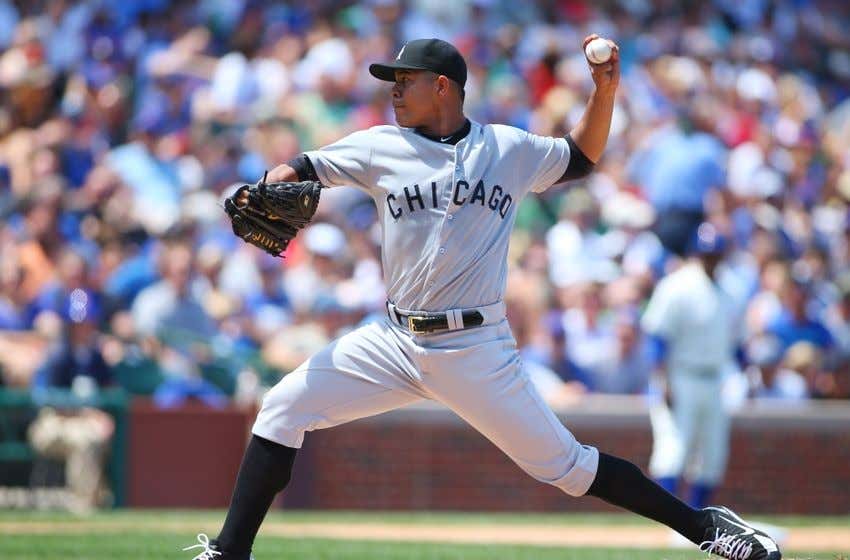 There’s been a lot of chatter/ melting down on Cubs twitter over the last week or so due to a .500 start through the first month of the 2017 season. Though anyone with a brain knows that this team is destined for the playoffs at bare minimum, there are a few legitimate reasons to be concerned about them, mainly in reference to the pitching staff. Here are a few team stats

-Jake Arrieta average fastball velo down from about 95MPH in 2015 to about 92.5MPH this year as depicted by the following graph:

All important and relevant stats, but at the same time stat nerds would also say the pitching staff is bound for regression to the mean as well:

Now, I usually duck and dodge any and every question regarding advanced statistics in baseball because my brain isn’t smart enough to compute them a lot of times, but I do recognize their importance within the game and use them as a reference any time I can. That said, you don’t need a PhD to recognize the regression which brings me to my next major points. First, a few concessions:

Yes… the Cubs are off to a shitty start. Yes… the starting pitching kinda stinks right now and its depth is scary thin. And yes… Baez/Russell/Rizzo/anyone not named Bryant have all started the season in slumps and are not playing to anyone’s standards at the exact same time.

BUT… the Cubs are a good team. A very, very good team. They probably were too cocky going into the 2017 season, with Lambos in the outfield and petting zoos and all of that extra shit that probably makes Jon Lester want to pop a cap in Joe Madden’s head, but this team will eventually take off. Everyone on earth knows that as soon as the weather warms up that the bats will heat up. They do need to settle into a set lineup so hitters can get into a rhythm and get Schwarber the fuck out of the leadoff spot, but in due time they’re going to be dropping scud missiles onto Waveland Ave. on the reg again.

Then again, as referenced by the stats above, they’re not a team without flaws. In fact, April pointed out that an argument could be made that they’re not even the best team in the National League. They will absolutely contend for another World Series title. They could even conceivably stand pat, not make any big acquisitions, and with the true talent on the roster win the World Series again.

But that’s not Theo. Everyone knows that. He’s a blood thirsty prick hell bent on winning World Series titles. He’s going to make a splash. He’s going to add a player that will put them over the top. Last year it was a rental in Chapman. He mortgaged a few prospects with insanely high ceilings for just a few months of him. For that reason (among others) I can’t see Theo trading the farm away for a rental again. He’s going to target a cost-effective SP with multiple years of team control.

Here is a list of rentals (most likely) available this year:

There are a few others who have team control who should conceivably be on the market come June/July, but none of note that could give the Cubs top of the rotation starter with multiple years of control qualities that I believe Theo and Jed will be targeting.

In steps Jose Quintana. It makes so much of sense for both teams.

Though Q has struggled in 2 starts this year and his command has been a tick off, all of his measurables are as good as ever. Without digging into his actual pitchFX and whatnot, nothing in plane view leads me to believe he’s a worse pitcher now than he was a in the last 4 years when he was a top 15ish starter in the game. I do not think his catchers help him whatsoever with their receiving of his pitches, but that’s a weak excuse. He could be pressing with all of the trade rumors circulating as well. But there’s not a doubt in my mind he’ll turn it around.

Outside of Chris Archer, who’s got better shit, more team control and is younger than Q, there’s not a pitcher who is readily available as we speak that makes more sense for the Cubs to target in a trade than Jose Quintana. Not a single one. He would slide into that rotation behind Lester and Hendricks and in front of that bum Arrieta seamlessly. That’d give the Cubs a more than solid 1 through 4 that could, should and would compete with anyone in a best of 5 or 7 series.

Sox fans have an insatiable appetite for prospects right now. Teams that have been rumored in trades for Q are the Pirates, Astros, Yankees, and Braves, all of whom have the weather of quality prospects that would be acquired for Quintana’s services. But for whatever reason their fanbases all raise holy hell that they might trade a bunch of sure fire, can’t prospects (no such thing) for a “4 or maybe 3 starter”, not realizing how good Quintana has been over the years. But if there is one fanbase that truly knows how good Q is and has been, it’s the Cubs.

Cubs fans don’t want Q, they need Q. And I love it. They’re the one fanbase that just gets it when Q is the topic of conversation. And guess what? They have a prospect pool that’s both deep enough and talented enough to acquire him.

David Kaplan has said multiple times over the last week that Reinsdorf, Kenny and Hahn WILL NOT make a deal with the Cubs. I’ll be the first to tell you that is complete and total bullshit. If Hahn won’t take a package from the Cubs for Q, it better be because it’s not good enough. If my good friend Rick (Hahn) refuses to trade him 8 miles north because he doesn’t want to contribute to another Cubs World Series, in spite of what could potentially be the best return in a trade, he should be fired on the spot. But he’s way, way smarter than that. He told me that himself when I interviewed him for our hit podcast Red Line Radio, not to brag btw. And FWIW Sox fans and the organization in general don’t have the same emotional attachment for Quintana as we did for Sale, so that’d make the trade all the easier for us to stomach.

Jose’s Quintana’s best value for the White Sox right now is what he nets in a trade. I do not foresee the White Sox hanging on to him until 2019-20 or so when they hypothetically should be contending again. At the same time, the Cubs have a 5 year window, give or take, where their goal is to hoard as many World Series titles as possible. Their current states are so different right now. Out of all the farm systems I have personally raided in my head with a Quintana trade, I like the Cubs the most. IT MAKES SO MUCH SENSE FOR BOTH TEAMS!

PS – Happ (who’s pretty much blocked), Candelario (who’s definitely very much so blocked) De la Cruz (3ish years away), and a lotto ticket and let’s lock it up