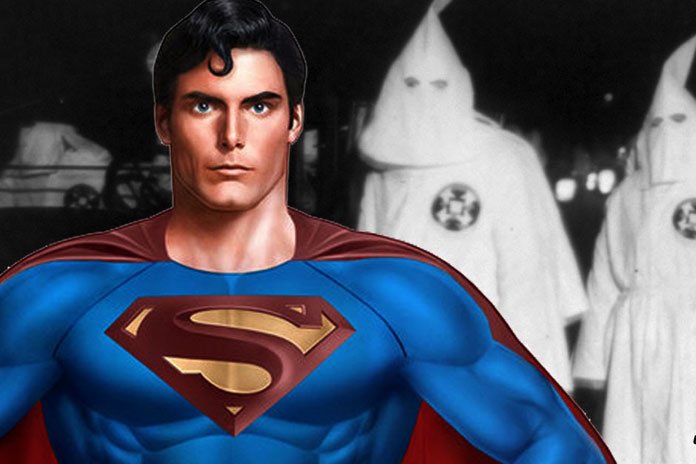 Deadline- Lotus Entertainment and Paperchase Films are teaming with financier and executive producer Marco Vicini to produce Superman vs. the KKK, a film of Rick Bowers’ 2012 YA nonfiction book being adapted for a general audience. Bowers’ book (full title: Superman Versus The Ku Klux Klan: The True Story of How the Iconic Superhero Battled the Men of Hate) chronicled the creation of a real-life 1946 radio drama in which Superman took on a thinly-veiled version of the actual Klan. The book will be adapted for the screen by Katherine Lindberg.

For the most part, I’ve never been a DC guy, both in comics and movies. The Dark Knight is in my Top 10, the other two in the series were pretty good, but that’s about it. All the recent Superman flicks have been utterly forgettable for me, I didn’t give a shit about the Green Lantern movie, and the only part of Suicide Squad I was interested in was Margot Robbie.

But this is how you get eyeballs on a franchise. You want to sell some tickets for the silver screen? Kill some Nazis or KKK dickheads. It worked for Indiana Jones. It worked for Inglorious Basterds. And it sure as hell worked for Django Unchained.

Even Call of Duty is going back to World War II so you can kill Nazis of the living and undead variety. I’m not saying Superman is boring, but he is boring. I don’t know if the casting of Superman was the issue, the villains stunk, or what. But the movies stunk. However, when you have Clark Kent’s alter ego knocking KKK members to the moon and melting them with his heat vision, it may be something I would be interested in finding a babysitter for. If you can’t get behind an American icon beating the everliving shit out of Nazis or the KKK, I have to ask just whose side you are on. Don’t fuck this up DC, because I am extremely interested.