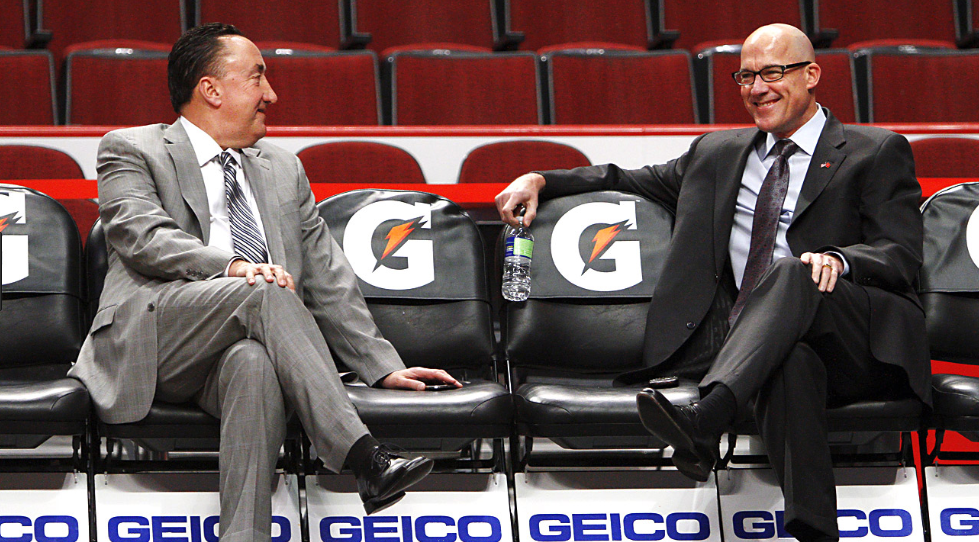 And Here. We. Go. I was all set to write an article about my burning hatred for Gar Forman and then the Bulls go ahead and undercut me with some HUGE news. According to KC Johnson Michael Reinsdorf realizes the Bulls need to shake things up in the Front Office, awesome, amazing, all we’ve been asking for! (Source)

And the change is, drumroll please….

Hiring John Paxson’s idiot brother to talk a little bit more in meetings!!! Wait but he can’t be an idiot, he drafted Lebron James, it says it right there. Weird that it forgets to mention the fact that he ran the Cavs into the ground, bad enough to have the number 1 pick when Lebron came out. Or that his record as GM was 185-307. Or that getting credit for drafting Lebron James is basically giving him credit for being alive at the time. You don’t get credit for drafting Lebron James, you get credit for having a pulse and a halfway functioning brain. Every single person in the world drafts Lebron James in that spot, every single person.

But this should be no surprise. Just vintage Reinsdorf. See that the fans are getting restless, feel some heat from the outside, solve it by hiring another family member of your inner circle. These are the same guys that promoted, yes promoted, John Paxson when he wanted to quit. The same group that  reportedly alienated their only worthwhile star.

And has him convinced that Randy Brown was sent from the FO to spy on the team. Yes that was a real story for a professional franchise. (Source)

The Front Office that routinely trades to dump salary or take on bad salary that can come off the books rather than make trades that actually help the team. The Front office that ran Thibs out of town, starting with the sudden firing of his top assistant and close friend because he had the balls to question the great and powerful Gar Forman. (Source)

Then hired yet another member of the Ames Mafia in Fred Hoiberg, who is a nice guy but not an NBA Coach. Why you may ask? Well Gar Forman has known Fred Hoiberg for 20 years and knows he’ll be a lackey and a shill to everything this front office does. (Source)

Is it any shock that this front office routinely misses on top end free agents, Lebron, Wade, Carmelo. Do we really buy the whole “no one wants to play in Michael’s shadow bullshit?”. MJ has been gone for almost 20 years now, maybe instead of that it’s no one wants to play for the dysfunction that this Front Office has become? That maybe to the general public things seems fine but to anyone who is tapped into the NBA the Bulls are a laughing stock of an organization. But it’s ok, we missed on those guys but landed Carlos Boozer and Pau Gasol and sold some more playoff tickets for Jerry. Our window is still open!

This is what the Bulls Front Office is. Instead of having vision and plans they worry about nepotism and the same tired thinkers that worry more about keeping their job than taking risks and building a future. It goes from the top down. Jerry Reinsdorf loves John Paxson like a son, Jerry Reinsdorf’s actual son calls the shot, Gar Forman is tight with all of them and then hired a friend in Fred Hoiberg. This is what the Bulls are  through and through, so it should be no surprise that the big fix in the offseason is to have Jim Paxson speak up in draft meetings because he watched the Final Four and likes fill in the blank player from a nationally televised game we all fucking watched. Everyone is to blame and nothing will be fixed. Just like when D-Rose got hurt and the bullshit spin zone was that the Bulls were so close but got derailed by a few injuries, these guys will sit in front of the media and say the Bulls would have won the series against the Celtics with a healthy Rondo. That may be true but maybe pinning your hopes for a second round exit instead of first round exit on a 31 year old point guard that was almost waived in January isn’t exactly progress? And in the effort to be fair I’ll say not every move has been awful. Drafting and re-siging Jimmy Butler to what is now a team friendly deal was genius. Trading D-Rose and not re-signing Joakim Noah was smart. Signing Rondo in the offseason even though they didn’t let him be Rondo until the last month of the season turned out to be a great move. But the bad far outweighs the good. I don’t know, maybe I’m asking too much because I know nothing will ever change with this group, but I can at least voice my displeasure time and time again. Don’t fall for their bullshit because that’s exactly what it is. There is no excuse for the team quitting on Friday night to close out the season, except for the fact that the Front Office quit on building a real team with a real plan a long time ago. They are a Front Office that trades in bullshit and thinks the fans haven’t noticed. Fire everyone yesterday.