Pennants are now won in April, but they can be lost if you get off to a terrible start. For a few teams expected to be contenders for the postseason that has come true.

No team has had a more disastrous April than the New York Mets, who ended the first month of the season dead last in the National League East with a record of 10-14. Making matters worse the Mets, who had championship dreams have been ravaged by injuries again. Starting the season already without Captain David Wright, who likely will never play again, Steven Matz, who the team can’t figure out what’s wrong and Seth Lugo who likely needs Tommy John after throwing hard in the WBC, the Mets have already lost their ace and their most important hitter to long term injuries that were made worse by the Mets lack of leadership. First to go down was Yoenis Cespdes who was clearly struggling in batting practice after missing a few games with a tight hamstring. The Mets gave him the green light and he suffered a full blowout and is out for the foreseeable future. Meanwhile, Opening Day Starter Noah Syndegaard was scratched from a start with a sore bicep, and refused to go for an MRI. Instead of playing it safe the Mets crossed their fingers hoped nothing bad will happen and natural disaster struck, as the Nationals buried the Mets hopes in a 23-5 beatdown. The Mets are done, with the injuries to the two most important players expect to see them fade away in May. This is going to be a lost season in Flushing, the only question is how do the Mets recover for 2018. The first step is accountability and this team is sorely lacking in that department. 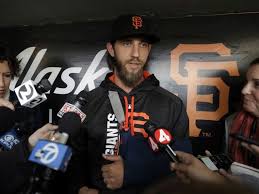 The only team in the National League that had a worse month than the Mets is the San Francisco Giants, who despite being in an odd year had high hopes at the start of the month, but those hopes seemed to get flipped over on a dirt bike in Colorado. Though the Giants have been silent, they have to be quite angry with their ace Madison Bumgarner who injured his shoulder riding on an off day in Denver. The expectation is Bumgarner will be out until at least the All-Star Break. The Giants meanwhile have struggled to score runs, with just 87 in their first 26 games. Without Bumgarner the Giants are in serious trouble, but if they can’t get their bats turnaround it will be all moot.

The surprise team in the National League so far is the Colorado Rockies, who end the month atop the Western Division. This is with some of their usual big boppers like Carlos Gonzalez and Trevor getting off to slow starts. Though the Rockies may want to look behind them because the Los Angeles Dodgers who scuffled through much of the month ended April with four straight wins and appear to be just hitting their stride.

The reigning champion Chicago Cubs have done just enough to lead the Central Division as everyone else in the division has been rather mediocre. Ending the month with a record of 13-11, may not blow fans in Wrigleyville away, but for their talent just getting out in front should be enough as they know more than anyone it is a marathon not a sprint. The most notable player in the division has been Eric Thames of the Milwaukee Brewers who has been better than anyone could have imagined upon his return from Korea, hitting 11 home runs. 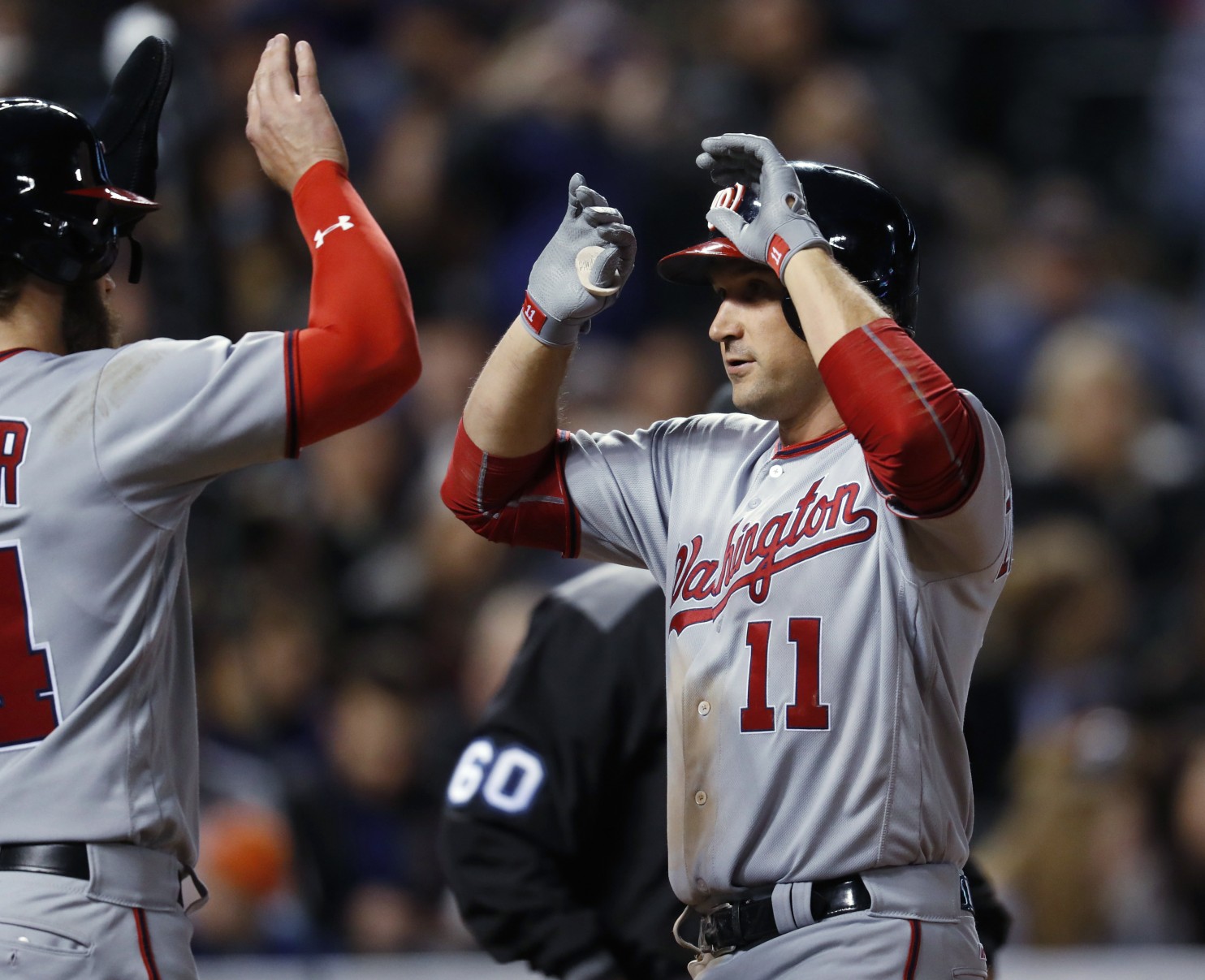 The best team in the National League has been the Washington Nationals, who are about to run away with the Eastern Division with the Mets crashing on in a fiery wreck on the season’s opening lap. The only thing Nats fans have to be upset about is the gruesome season ending knee injury suffered by Adam Eaton, their big off-season acquisition. Otherwise things could not be better for the Nationals who at 17-8 have the best record in baseball. The Nats success has been without Max Scherzer and Stephen Strasburg who have not gotten off to fast starts, while the lineup is setting the NL on fire. As April ends, Ryan Zimmerman leads the Triple Crown with a .420 average, 11 home runs and 29 RBI. Not far behind is Bryce Harper with a .391 average, nine homers and 26 RBI. The Nats have the three top RBI leaders in the NL, with Daniel Murphy also collect 26 RBI, and that does not include Anthony Rendon who became the first player in a decade and 13th over to have ten RBI in one game in their 23-5 execution of the Mets. 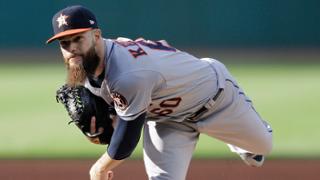 Dallas Keuchel of the Houston Astros has bounced back from a poor 2016.

In the American League the Houston Astros have blasted off to a quick start posting a record of 16-9. The key to the Astros early success has been Dallas Keuchel who after a disappointing 2016 season, appears to be pitching like the Cy Young winner from 2015. Keuchel ended April with a record of 5-0, with a 1.21 ERA. The same can’t be said for their main division rival the Texas Rangers who have been sleep walking most of the month with a record of 11-14, as they have struggled to find reliable relief. Also struggling in the West, has been the Seattle Mariners, who expected to make a move this year. A big concern in Seattle has to be Felix Hernandez who has been shut down for a month with a “dead arm”. Meanwhile, the Los Angeles Angels are benefiting from a quick start from two time MVP Mike Trout who has looked every bit the best player in baseball, batting .364 with seven home runs and 18 RBI.

In the Central Division, the Cleveland Indians have performed up to expectations as they hope for a return trip to the Fall Classic, leading the way a 14-10. The Tribe has to be happy with the start Michael Brantley has gotten off to, after missing most of the 2016 season, batting .308, with five home runs and 17 RBI. Expect the Indians to take off as the weather gets warmer. The surprise team in the Central has to be the Chicago White Sox, who were expected to be on their way to finishing in last place in the midst of a fire sale. However, the South Side Sox have been quite competitive, posting a record of 13-10 thanks to a breakout month from Avisail Garcia who leads the American League in hitting with a .368 average, with five home runs and 20 RBI. On the other end of the spectrum is the Kansas City Royals, who are a far cry from the 2015 World Series, posting the worst record in baseball at 7-16 as they ended the month on a nine-game losing streak. With players approaching free agency and the loss of Yordano Ventura thrown in the Royals could be in for a long summer.

In the East, it’s been all rise for the New York Yankees, as the honorable Aaron Judge has been handing out long blast into the stands and sentencing pitchers to high ERAs. The early favorite for Rookie of the Year, Judge leads the American League with 10 home runs, while batting .303 with 20 RBI. The Yankees end April tied atop the division with the Baltimore Orioles with a record of 15-8. The Yankees have gotten better than expected starting pitching with Michael Pineda and Masahiro Tanaka both off to strong starts. Whether or not the Yankees are for real or not remains to be seen, but considering they have done it with Gary Sanchez and Didi Gregorius signs are pointing up. One game that has to be the highlight of the month was their 14-11 win in ten innings against the Orioles on Friday Night after they had once trailed 9-1. The O’s meanwhile continue to find ways to win under Buck Showalter and look like they will once again be the thick of the race. 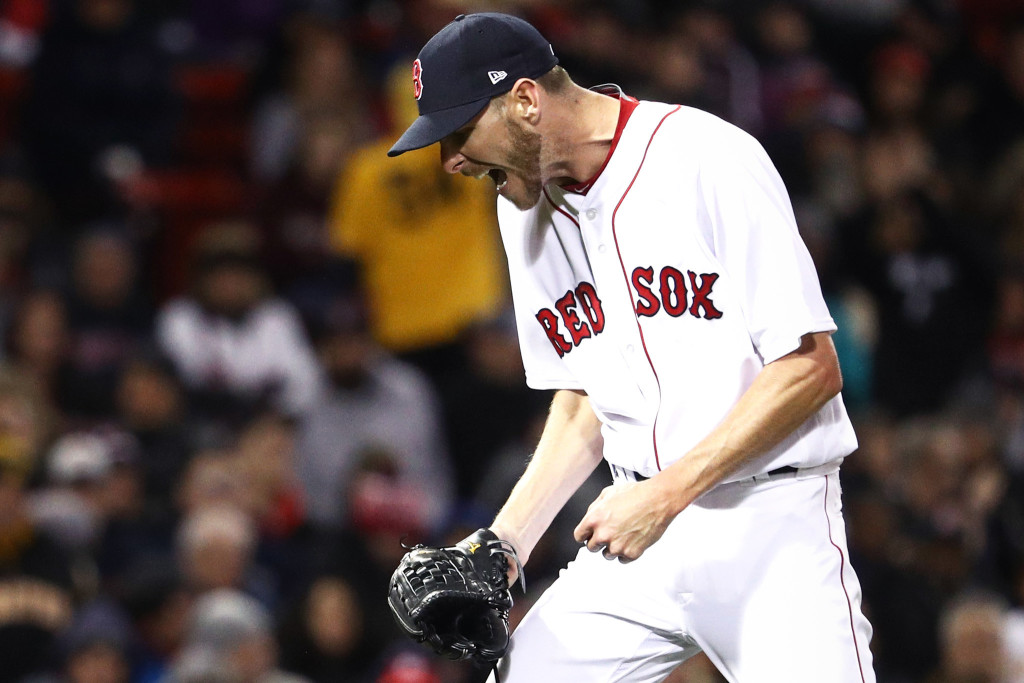 Chris Sale has dominated in his first month with the Boston Red Sox.

The Boston Red Sox hitting struggles have to be one of the most confounding things in the American League, as they have scored just 93 runs, as it is clear they are missing the bat of David Ortiz. However, their pitching has been terrific as Chris Sale has been as good as advertised, despite posting a 1-2 record as he has a microscopic ERA of 1.19, with an amazing 52 strikeouts as he has suffered from a sever lack of run support. You have to expect the Sox to start hitting eventually as Mookie Betts and Jackie Bradley Jr. are just too good. If they can combine it with their strong pitching Boston should get back in front of the division by Memorial Day.

On the other hand, the same can’t be said for the Toronto Blue Jays who have played terrible baseball in almost every aspect of the game. Though they have played better over the last week, the Jays have to wonder if Jose Bautista can bounce back from a slow start as he ended the first month with a .178 batting average with just one home run and seven RBI. The Jays ended the month with a record of 8-17, which includes back-to-back wins over the weekend. The lone highlight for the Jays was the flying dive by Chris Coghlan over Yadier Molina. The Jays have been notorious slow starters and should bounce back in May.

The season still has five months left and most teams can say they still have a chance to win, but for the Mets, Royals and Giants it likely is already over as their cars are pulled off the track and heading for the garage.

Frank Fleming is the creator of the sportsecyclopedia.com